Bright future for curling in Portugal 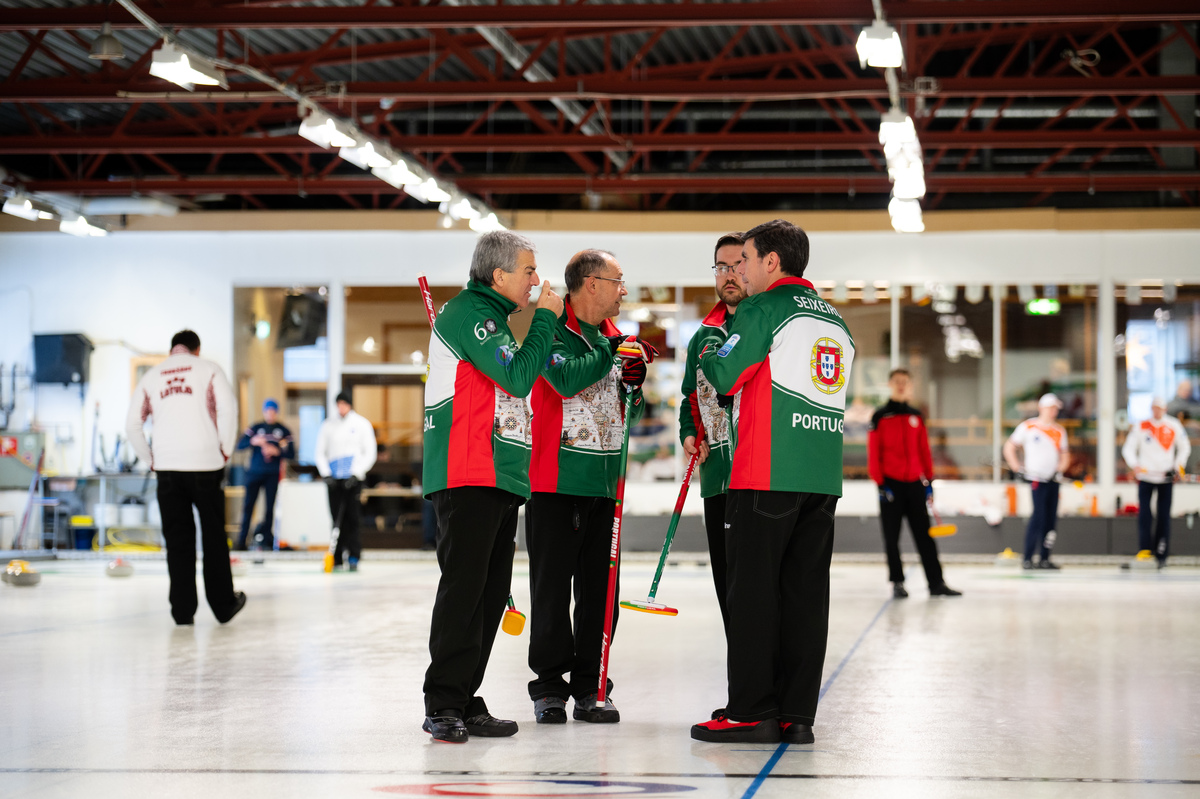 The green, white and red playing uniforms of Portugal’s men’s team are right up there among the most colourful here in Oestersund. The good news is that their brightness is matched by the energy and effort that are currently going into trying to establish Portuguese curling more generally.

The Portuguese Winter Sports Federation became a World Curling Federation member in 2017 and the Portuguese men are playing in the European B-Division, having gained promotion from the C-Division earlier this year in Kaunas, Lithuania.

In total, this is the fourth appearance by a Portuguese team at a World Curling Federation championship event.

But how did it all start?

Portuguese national coach Fiona Simpson — a medal winner for Italy at world seniors level — explains, “It all started about ten years ago when we learned there was a Facebook page about Portuguese curling by a young man named Joao Cardoso who had fallen in love with curling by watching the Vancouver Winter Olympics on tv. This started a conversation, and we met Joao. We then fixed up a meeting with the Winter Sports Federation and it all went from there.”

Steve Seixeiro, who is skip of the men’s team, takes up the story.

And it all started to move from there, to the point that Steve now skips the men’s team competing at the Le Gruyère AOP European Curling Championships 2022. All team members share their time between living in Canada and living in Portugal, celebrating their family roots.

Incidentally, Steve himself is a well-known face on the circuit as he often acts as a photographer on the World Curling Federation media team at major events.

The Portuguese initiative is now growing beyond the current team members though.

Like Steve, coach Daniel Rafael is Portuguese, although better known as a high-level coach in Canada and elsewhere.

He explains, “We have two separate groups now — those that can curl and have ice and Portuguese natives that have started curling in various areas of Europe.”

He also gave an explanation as to why interest in curling is growing.

“I heard that curling was the most-viewed winter sport on Eurosport in Portugal and most people I speak to in Portugal know about curling, and they want to know where they can try it. Everybody’s interested, we’re just waiting for ice.”

Daniel also tells the tale of how close Portugal recently came to having its own curling ice.

“Pre-COVID there were plans to go into a Winter Sport Pavilion in Lisbon, with three sheets of curling ice, an Olympic-sized hockey rink, restaurant and a bar. Then COVID hit and the plans went to pot. Now they’re just discussing where to put it, but there still is a plan to develop it. Although, the last I heard, it might take four years.”

In the meanwhile, Portuguese curling is trying to make progress with the resources it has.

Fiona explains, “We have one of those tents like those that you see being put up at Christmas. It’s semi-permanent, but it’s only half a sheet long. Now, we’re going to have a have-a-try curling weekend on the 16th December in Serra da Estrela.”

For the moment, curling in and for Portugal is becoming a success story as their initial internationalists strive to make their mark, the next stop being the World Mixed Doubles Qualification Event in Dumfries, Scotland, in December.

And when asked if there is enough energy and support to help keep the development work going back in Portugal, Daniel is clear, “For sure there is.”

The key to building that success, as it is in so many developing countries, is overcoming the early hurdle of having dedicated curling ice.