Niklas Edin looking at new challenges while recovering from surgery 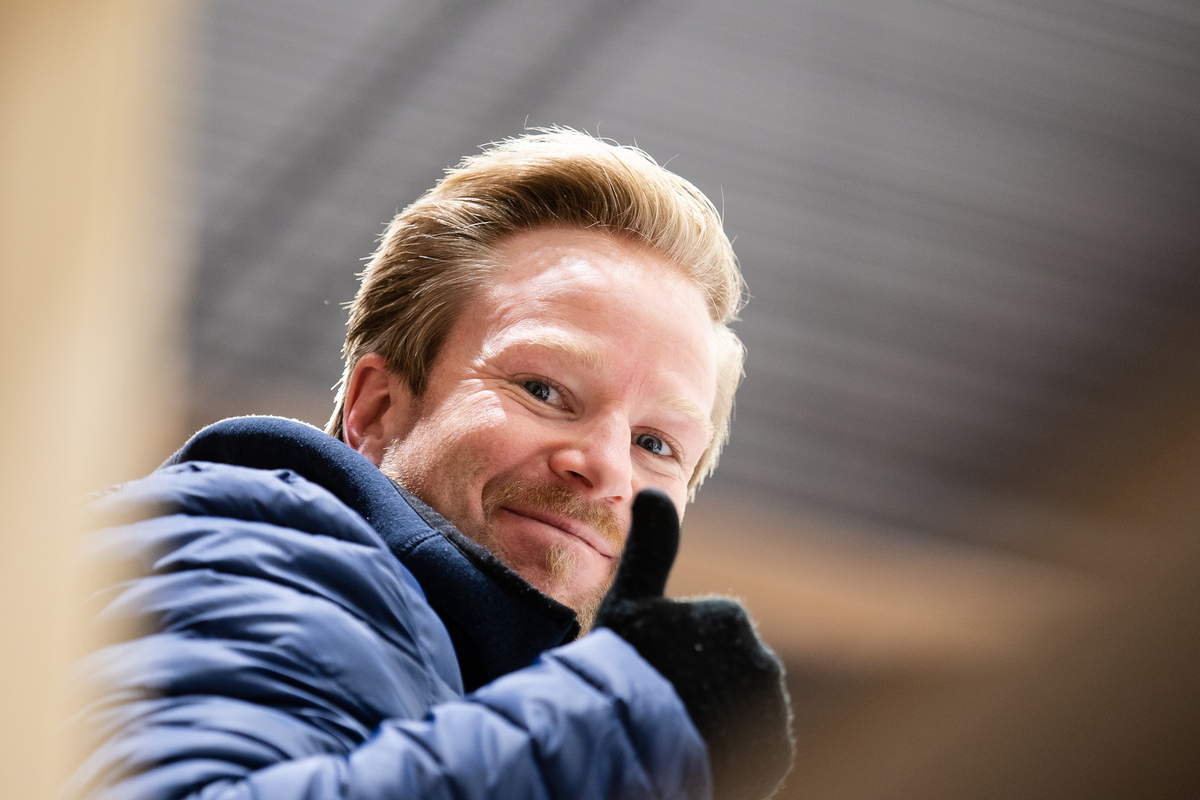 Niklas Edin — reigning Olympic champion, six-time world champion, and seven-time European champion — is one of the best-known faces in curling.

But now, with injury forcing him out of this year’s Le Gruyère AOP European Curling Championship, he is taking his first steps to becoming a well-known voice in the sport too, by taking up a seat as a World Curling TV commentator.

This new role finds him sitting on the media bench, working alongside the likes of fellow Olympic champion Rhona Howie (Martin) and seasoned commentator Sander Rolvaag, and beside the ultra-hard-working World Curling Federation media team.

Between games, Niklas took time out to give us details of his injury and how his recovery is going. But first, a little bit of human biology: ‘the menisci of the knee are two pads of fibrocartilaginous tissue which serve to disperse friction in the knee joint between the lower leg (tibia) and the thigh (femur).’

With that knowledge, Niklas explained, “It was basically a tear on the meniscus. The meniscus tore and then it flipped over and stuck in my knee joint, so that I couldn’t move my leg, straighten it out or bend it enough. They needed to open it up, flip it back and suture it. It happened about three and a half weeks ago, in Canada.”

He gives further detail, saying, “I had an MRI scan and an X-ray done on my knee there, but when I heard what was needed, it wasn’t an option to do it in Canada. The rehabilitation was too long and even travelling would have been impossible for a couple of weeks. So, I flew back to Sweden to have it done and I’ve had a couple of weeks’ recovery till now. We have a special insurance in Sweden for these things, so it was done right away. In this case you need an operation pretty fast, because the knee can’t move.

“I couldn’t bend it too much in the first couple of weeks. The meniscus needs time to heal, and the blood supply is not great, so it takes a long time to heal, much more than the rest of the body with better blood supply. Basically, I need to let it rest, do some rehab to strengthen it and slowly but surely start moving more. But the key is not to put pressure on more extreme angles too early, so the meniscus has time to properly heal first.”

He added, “The first week was super painful. It’s probably been the worst after any of my surgeries, and I’ve had a few. The first week was not pleasant — almost no sleep at all. But after that, as soon as that first initial pain was gone, and I started to be able to move and walk on the leg a little bit better, it’s been a pretty quick recovery from there. So, it’s a lot better now, some ten days later, and I’m really able to do most things fairly normally now. It’s just keeping away from adding that pressure on an angle.”

Looking forward, he said, “The total recovery time is four to six months, and with me being a little bit younger, along with being in sports and used to training, they thought it would be closer to the four months. Now, just a couple of weeks after the surgery, it already feels much better than it normally does, so I’m thinking more like three months or possibly even quicker than that. It’s hard to tell this early, it might be tricky to come back to 100% sooner than those four months.”

Asked about a possible return to curling action, he responded, “There are no easy decisions because with an injury like this, the worst scenario is if the injury comes back again. If it doesn’t properly heal, and I get the same injury again, then we’re back to square one, so I can’t really push this too soon. It’s a tricky one but, for now, it needs more time.”

Turning to his unexpected new role as a commentator, Niklas said, “Being on the media side definitely has a lot of up-sides. The down-side is not being able to play and to be on the ice — that’s a bummer.”

He explained, “Knowing I couldn’t play this event, it was a really good opportunity to sit up here — you get a great view, sitting in the perfect spot to see the game and then following along with all the games here, all event long, is really nice.

“It’s a lot of fun and I enjoy just being on this side to see what that’s like too. Having to concentrate all the time, it’s surprising and tiring. We have that in curling too, you need to stay focussed then too. But it’s a little bit different, following your game so closely and then you have to shift focus to a different game or an update of some sort — you need to really be alert and really pick things up quickly here.”

Niklas admitted to being a little surprised in his new role, “There’s a lot more going on than I expected. Not the commentary itself — that’s pretty natural for me, knowing the game inside out and knowing most of the players personally as well. But it’s just all the details around and trying to make a good dialogue between the two commentators, and not talk at the same time and all that. It’s much more detailed than I thought it would be. The first day, I was really tired, but know I’m feeling more confident and comfortable in this situation.”

Summing his week’s work up, he said, “There’s a lot of things to keep in mind and as soon as you relax, you tend to miss something out there. But this is a big opportunity to learn this new role.”