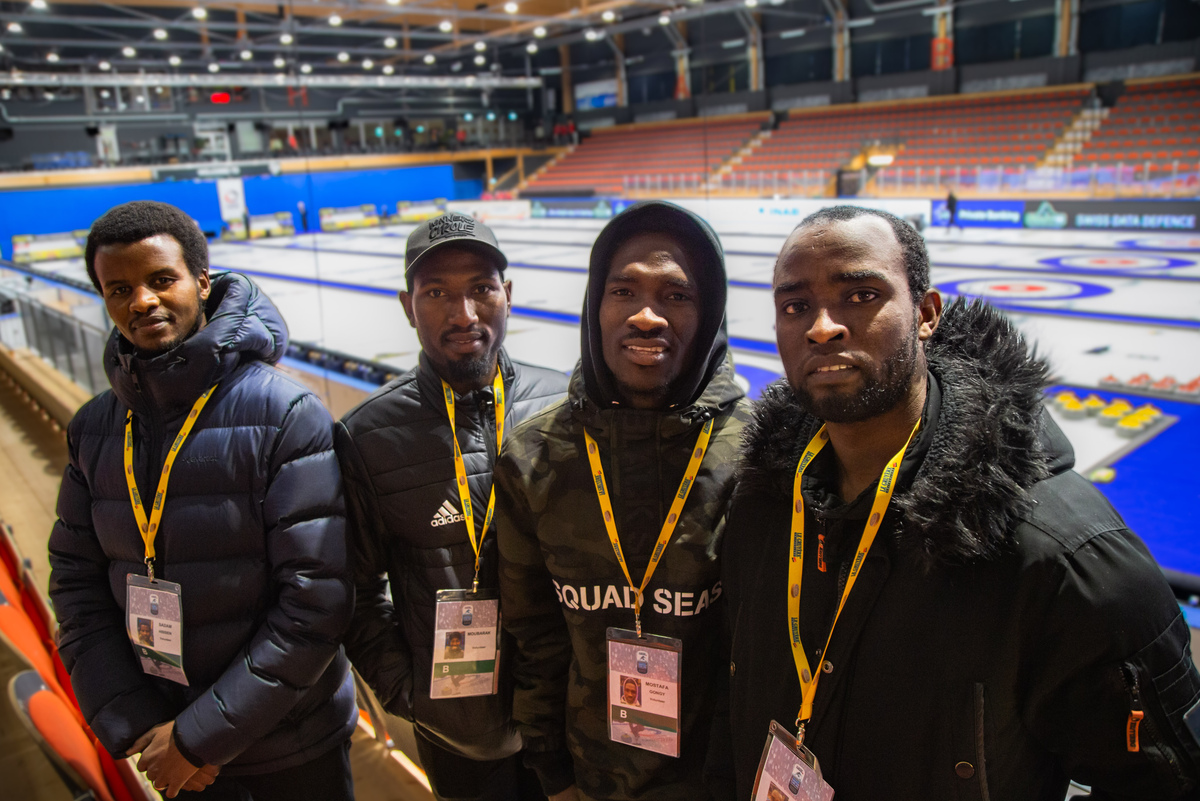 While the primary focus at all major curling championships is rightly on the athletes and their performances, there are plenty more people working behind the scenes doing their bit to make these events successful.

Local organising committees and their volunteers, professional ice-makers and their local volunteer supporters, caterers, television crews, media and umpires all bring their knowledge, expertise and enthusiasm into play.

And while some of these experts move from championship to championship, many get involved simply because a major curling event has come to their home town.

One role that is always recruited locally is that of TVAs — television assistants, who act as support for the on-ice camera operators.

And the TVAs in Oestersund are a bit special. The organising committee has joined forces with a local football club, the Mighty Cosmos and as a result, four Cosmos club members — Hissien Sadam, Moubarak, Gongy Mustafa and Nin Mohamed — are helping to ensure the Le Gruyère AOP European Curling Championships 2022 go off well.

Mighty Cosmos is not just any football club, it calls itself Oestersund’s “integration team”, bringing together individuals from many of the troubled or war-torn parts of the world, offering them a welcoming environment where the only thing that matters is how well you can play football.

All four of the new TVAs come from Sudan, all were forced by the war to leave their home country, and all have been granted asylum in Sweden or are in the process of being considered.

As Nin Mohamed says: “Cosmos is for many from outside.”

Just like all other athletes, all four TVAs are keen to talk about sport and their achievements. From a start in their league’s Division 6 in 2018, Cosmos now sit in the top half of Division 4. Cosmos members have also been involved in Darfur United — “an all-refugee men’s and women’s football team and a movement for hope”.

Before broadcast began, the Cosmos TVAs helped in the set-up of the championships, and, as their club official Alan Barker says, “This is a great opportunity for us, Cosmos, to watch and learn from top athletes closely and also to see how a professional organisation manages a world-class event.”

Local organising committee President Per Bergman spoke about the Cosmos tie-up, saying, “It feels good that the championships can help and support local clubs, in this case a club that works hard with integration and inclusion, it matches our core values very well.”

Perhaps the last word should go to Gongy Mustafa, who says, “We are trying to show that we can help and contribute.”

Before the end of the week, the Cosmos contribution will become clear.