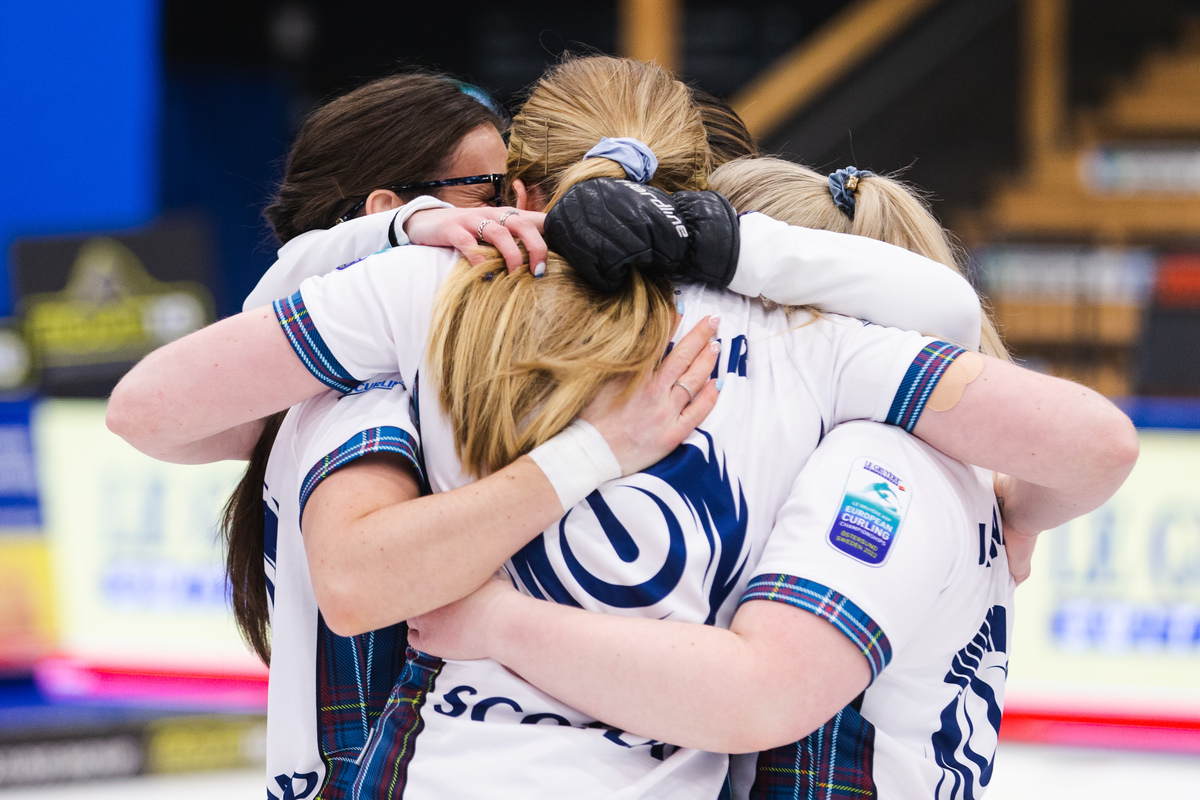 The bronze medals at the Le Gruyère AOP European Curling Championships 2022 have been decided — Scotland took the women’s, while Italy took the men’s bronze medals.

In the first end of the women’s bronze game between Scotland and Italy, the Scots had three stones sitting in the house when Italy’s skip Stefania Constantini came to play her last shot. However, her draw was heavy, to hand the Scots a steal of three points.

In the second end, Constantini made amends, playing a hit-and-stay to score two points and reduce the Scottish lead to 3-2.

The teams swapped single-point scores in ends three and four. Then, in the fifth, Constantini played a hit-and-roll behind cover to leave Scotland with a tricky draw with the last shot of the end.

Scotland’s skip Rebecca Morrison was heavy, and this gave Italy a steal of one point to tie the game at 4-4.

In the sixth end, the Scots moved into the lead again when Morrison played a well-judged draw to the four-foot ring, to score two and lead by 6-4.

In the seventh end, Constantini attempted an ambitious run-back shot, but a Scottish stone got caught up at the back of the house, to give Scotland a further steal, for two points this time, and an 8-4 lead.

Scotland went on to win by 9-5, to complete a bronze medal campaign for a team making its first appearance at this level.

After the game, an elated Morrison said, “I feel over the moon right now, I can’t describe it. After yesterday’s semi-final — that was just so tough. We really came back and we’re so happy to get that medal today.”

“We just said to ourselves that our goal this week was to medal and we’re still in reach of that. We had to pick ourselves up and say ‘we haven’t missed our goal yet’, and that really helped. We’ve had some really strong games and come back in some games when we were down, and that just shows we’ve got something within our team. I can’t wait to keep going with it.”

In the men’s game, between Italy and Sweden, it was the Italians who were in control from the start.

In the first end, Sweden’s skip Oskar Eriksson had a complete miss, and this let Italy’s skip Joel Retornaz draw his final stone into the house for an unexpected three points.

In the fourth end, with Italy now leading by 4-1, Eriksson played a draw, to score two points and reduce the Italian lead to 4-3.

Italy responded in the fifth, when Retornaz also played a draw, and also scored two points, to move onto a 6-3 lead.

In this see-saw game, Sweden scored two again, in the sixth, this time hitting out an Italian stone, reducing Italy’s lead to 6-5.

In the seventh end, Retornaz was facing three Swedish stones already in the house when he drew his final stone into the four-foot ring to score one point and extend his lead to 7-5.

Sweden’s Eriksson then produced a triple take-out in the eighth end to score two again and level the game at 7-7.

But, in the ninth, Retornaz produced a hit-and-stay to score two more points and move onto a 9-7 lead.

Despite all the Swedish efforts, Italy went on to win by 10-7, and take bronze for the second successive year.

Afterwards, Joel Retornaz said, “It’s a good medal, it’s a wonderful medal, especially the way we’ve played the entire week. The team was amazing. Of course, we were aiming for something more than bronze the way we played this week, because we had a strong performance, but it’s a medal in a European championship. It’s never easy to medal in this type of competition. I’m so proud of my team and I’m pretty happy.”