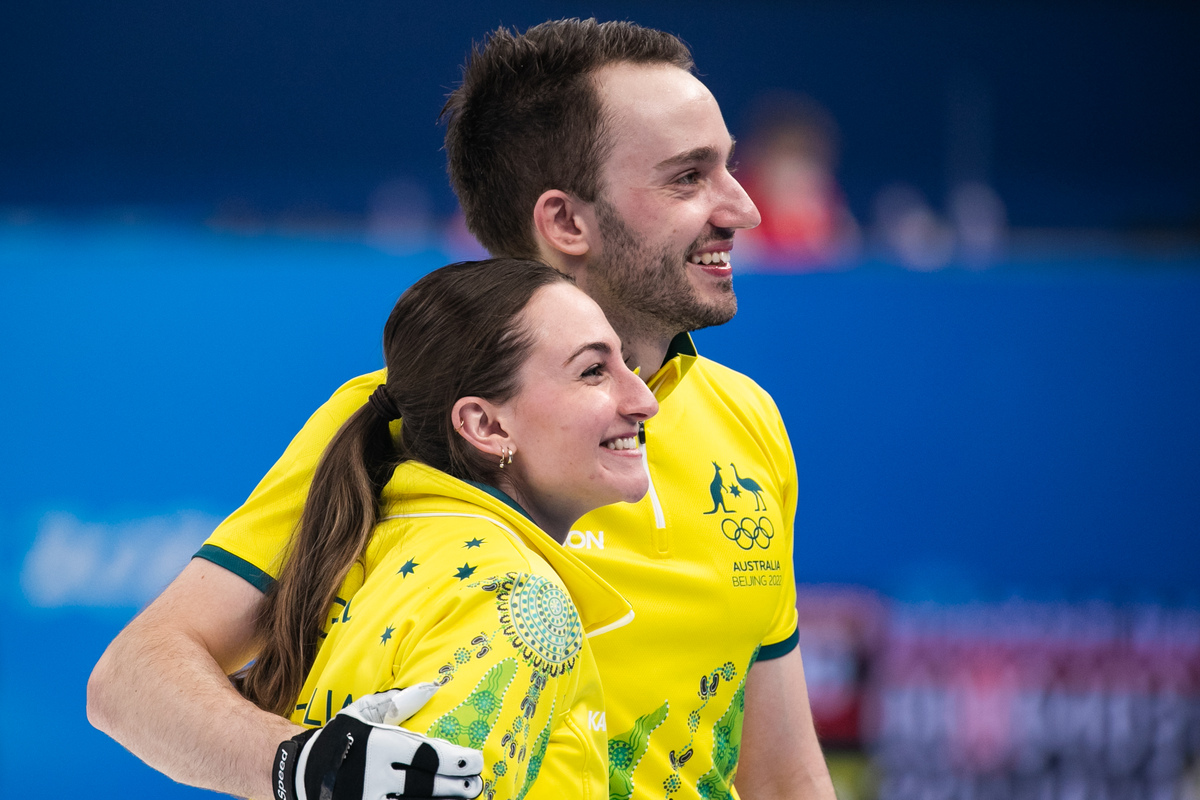 “I’ve been recognised a few times” – the modest admission of Australia curler Dean Hewitt, who along with Mixed Doubles partner Tahli Gill, has arguably done more than anyone or anything to put curling on the map in Australia. Hewitt is playing fourth stones for Australia at the Pan Continental Championships, but it was his Mixed Doubles exploits in Beijing earlier this year that threw him into the limelight.

Based on their performance at the Olympic Qualification Event last December, Hewitt and Gill became the first curlers to represent Australia at an Olympic Winter Games. They joined the 43-strong Australian team that competed in ten different sports in Beijing, winning four medals along the way – although Hewitt and Gill did not make the podium…this time.

As has happened previously in other countries, the curling duo lit up their nation’s interest. He explains, “When we were over there and when we were training in Canada we really didn’t see much [media interest]. We did a whole bunch of interviews, but we didn’t get to see the impact it had made.

“Once we got home, we actually got a sense of what that [the Olympics] was, and it was a lot bigger than we expected. Channel Seven (national Australian broadcaster) did quite a few things with us, they did a whole fifteen minutes one time. I think it’s fantastic that curling’s more of a known sport now in Australia.”

Looking ahead Hewitt added, “Hopefully we can have a bit more success with the men’s and women’s teams, and develop them as a whole and get a bit more exposure across all disciplines.  The biggest thing is to get it on TV, once you do that, it gets massive.”

Hewitt went on to explain some of what he himself has been doing since getting back from Beijing.

“As soon as we got home, I quickly ran up a presentation and started talking to school kids – that’s the fun part of curling for me right now – chatting to kids and getting them to try it out. Even if it’s on dry land, a little bit of floor curling. It’s fantastic to be able to share all this with the younger generation, hopefully inspiring them to pursue their dreams.”

Curling is currently practised in three major Australian cities – Perth, Adelaide and Melbourne – with some 600 players actively involved. Its widely acknowledged that the next big step for Australian curling would be to have a dedicated curling facility in the country.

And that’s exactly at the top of the ‘to do’ list for Hugh Millikin, the Australia-based World Curling Federation Vice President for the Pacific-Asia Zone.

He said, “We’ve had four or five projects to try to deliver dedicated curling ice that have been really close, but have fallen over at the last minute. I think the Olympics has changed that. We have two active projects, one in Canberra which is now at the final stages of funding, so that could start to be built by the end of the calendar year.”

He added, “The real big change that has happened since Dean and Tahli’s performance has been that the Australian sporting institutions have all realised they need to get behind the sport. Their backing and support will make a difference. At the end of the day…are we a lot closer? I think we are. I’d love to say we’ll have a dedicated facility within a year, but that might be slightly optimistic.”

As a former international player, Millikin knows too well the struggle for curling to gain recognition beyond the sport’s traditional heartlands.

“I remember I’d say I was a curler, going off to world championships and people in Australia would have no idea – their eyes would glaze over. Now, I don’t think I’ve had any conversation in Australia since the Beijing Olympics where they weren’t aware of curling. The awareness is absolutely all over the place. The whole thing of getting kids involved, getting them on to the ice with a ‘learn to curl’ programme needs a dedicated facility, and that’s the only stumbling block to making it a very popular sport in Australia.”