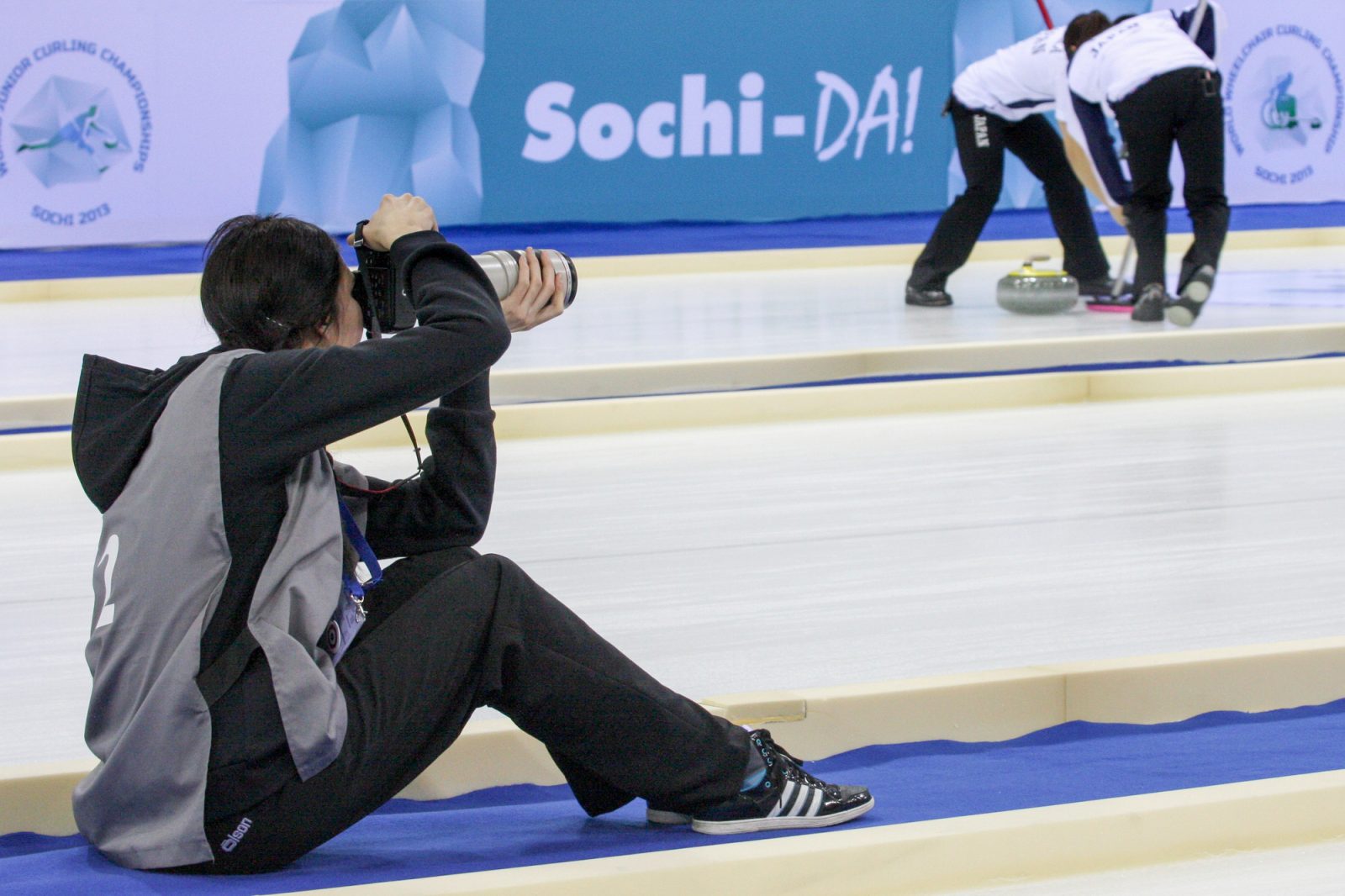 In 2012, the World Curling Federation launched an exciting and innovative new programme for students, encouraging writers and photographers to submit examples of their work with the prize being an all-expenses-paid experience with the WCF Media & Communications Team at the World Junior Curling Championships 2013 at the Olympic venue in Sochi, Russia.

Alina in action during the WJCC 2013 Photo: WCF/Richard Gray
Not surprisingly, this was an immediate success, with over 100 entries received from students all over the world, many of them without a previous curling connection.

Eventually, the WCF’s expert panel of judges agreed that the photographer slot should be offered to Alina Pauliuchyk from the Belarusian capital of Minsk. She is a student at Minsk’s University of Photography, while Kyle Jahns from Winnipeg, Canada, studying Creative Communications at Red River College, was selected as the winning journalist.

Both duly arrived in Sochi for the World Juniors and were immediately pitched in to the action. Towards the end of their spell there, the WCF Media & Communication Team had a chat to find out what they had taken from this opportunity.

Alina reflected on her experience, saying: “I love putting curling into the picture. I really wanted to be here, to be a small part of the competition and of course I wanted to improve my photography. I love sports coverage and sports reporting about curling – what could be better?”

She added: “This has been an invaluable experience for me to work in a team of professionals, watching and learning from some fantastic photographers. I’ve enjoyed every day spent here, I study everything that catches the eye and sometimes I make very pleasant discoveries.”

Kyle recalled how he found out that he had won. He said: “I was definitely shocked when I won. When I applied I really put a lot of effort in because I really wanted to win. I remember knowing that the announcement was going to be made and I’d be getting an e-mail. I woke up at 5.30am to find out if I got it or not and thankfully I did.”

Kyle continued: “The experience has been amazing, one of a kind. I’m so thankful for the people that I’ve met and all the experiences I’ve gotten. I’ve learned a lot and I want to take that forward in my career.”

When asked if there had been any surprises, Kyle confirmed: “I was surprised to see how long the days were and how fast-paced everything is. The highlights would just be interacting with the players and writing a lot of feature stories about them. I took a lot out of that.”

Alina added: “I participate in curling and to be on the other side is very interesting. I’m working in a team of professionals and I did not think that so much needs to be done.”

Asked whether he thought it had been a good idea to run the contest, Kyle said: “The WCF should definitely run this competition again. They get that extra set of hands on deck and whoever they select as the student, the experience is absolutely invaluable. I’m just incredibly thankful to be here. It’s given me a good idea of what I want to do in the future now and it’s the best experience that you could ever get.”

And Kyle’s advice to anyone thinking about entering in the future: “Make sure you have a strong piece [entry] and don’t be scared to put as much work into it as you can. Go that extra mile and just try your best.”

Since their experience in Sochi back in March, Alina joined the WCF Media & Communications Team again to help photograph the 2013 World Women’s Curling Championship which was held in Riga, Latvia.

Kyle also returned to join the Team in Fredericton, Canada, where he covered the World Senior Curling Championships in April. Kyle has also since won the Wittman Award, a scholarship for excellence in sports journalism at his College, and has also been selected to work as an intern on the sports desk at the Winnipeg Free Press.