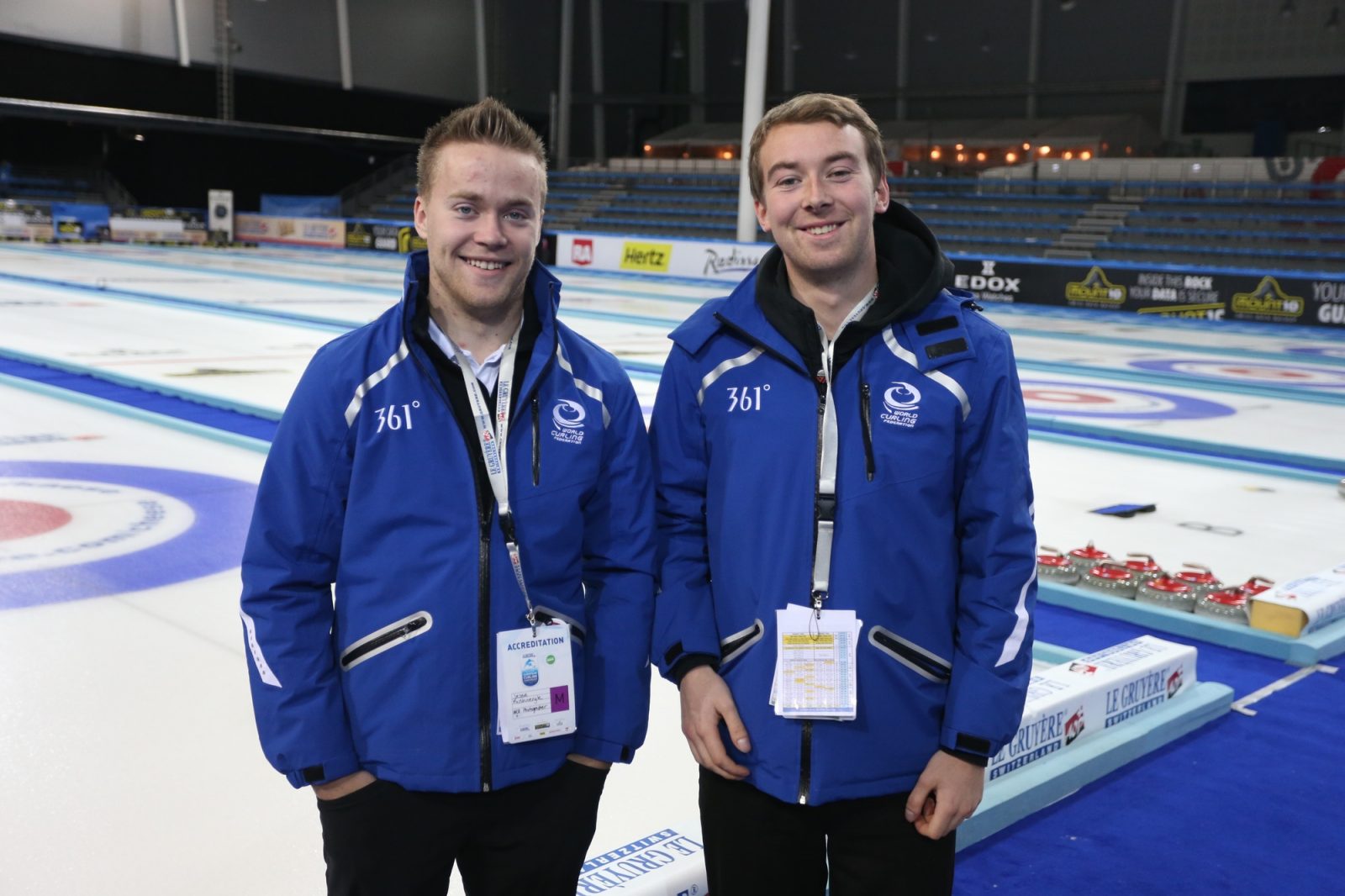 Journalist Rick Lane from England and Canadian photographer Jesse Kushneryk got their taste of the action at the Le Gruyere European Curling Championships 2013 in Stavanger, Norway.

All four trainees thoroughly enjoyed their immersion in international sports events, and while Celine and Jesse both had previous experience of shooting local curling events, Rick had never even seen a curling stone before coming to the European Championships.

All agreed that their experiences and the long hours had been eye-opening, thought-provoking and most of all, thoroughly enjoyable.

Rick spoke for them all when he said: “It’s absolutely amazing. To come here and experience it all, it’s been an incredible week. It’s okay learning about stuff in the classroom, but to go out and experience this in the real world is completely different.”

The students did a lot more than simply shadowing WCF Media and Communications Team. They all got involved in ‘live’ work during the events, with, for example, Taylor carrying out a major investigation into the impact of an international curling championship on local communities – a feature that ended up as a full-page spread in the WCF’s Annual Review (p27 of 2013-2014 Annual Review).

Over and above that, Jesse and Celine’s team pictures, taken at the start of their events, were used as identifiers by broadcasters all over the world. Meanwhile, Taylor and Rick’s interviews were sent across the globe in daily WCF media releases.

Rick identified this aspect of his work as being particularly helpful. He said: “Improving my interview skills has been the best thing. Before I came here I would have had trouble interviewing someone in the street, here I’m interviewing top international athletes.”

Travelling across the world to work among strangers in an unknown environment can be daunting, but all four came through well.

Jesse explained: “I’ve been surprised at how good everyone on the crew has been to work with, and the athletes too. To be at an event with this calibre of athletes, it’s unreal. The skill level of everyone that works with the WCF is what has impressed me most, its people hand-picked from all over the world. They travel together and they work together and it’s so cohesive.” Rick added, “I was surprised by just how open and friendly everyone is to talk to.”

All four have gone on to develop their sports journalism careers. Taylor landed a full-time role as a Communications Officer for a national sports federation in Canada while Rick has taken up a job as a sports reporter in a local English newspaper.

Jesse and Celine continue to build their own photography businesses. In doing so they follow in the footsteps of their predecessors.

Both of the previous season’s trainees made big strides in 2014. Canadian Kyle Jahns had a major role with the Olympic and Paralympic News Service at the Sochi 2014 Games.

Photographer Alina Pavlyuchik, from Belarus, meanwhile was the WCF’s official photographer at the Paralympics having previously returned to photograph for the WCF at the Titlis Glacier Mountain World Women’s Curling Championship 2013 in Riga, Latvia.