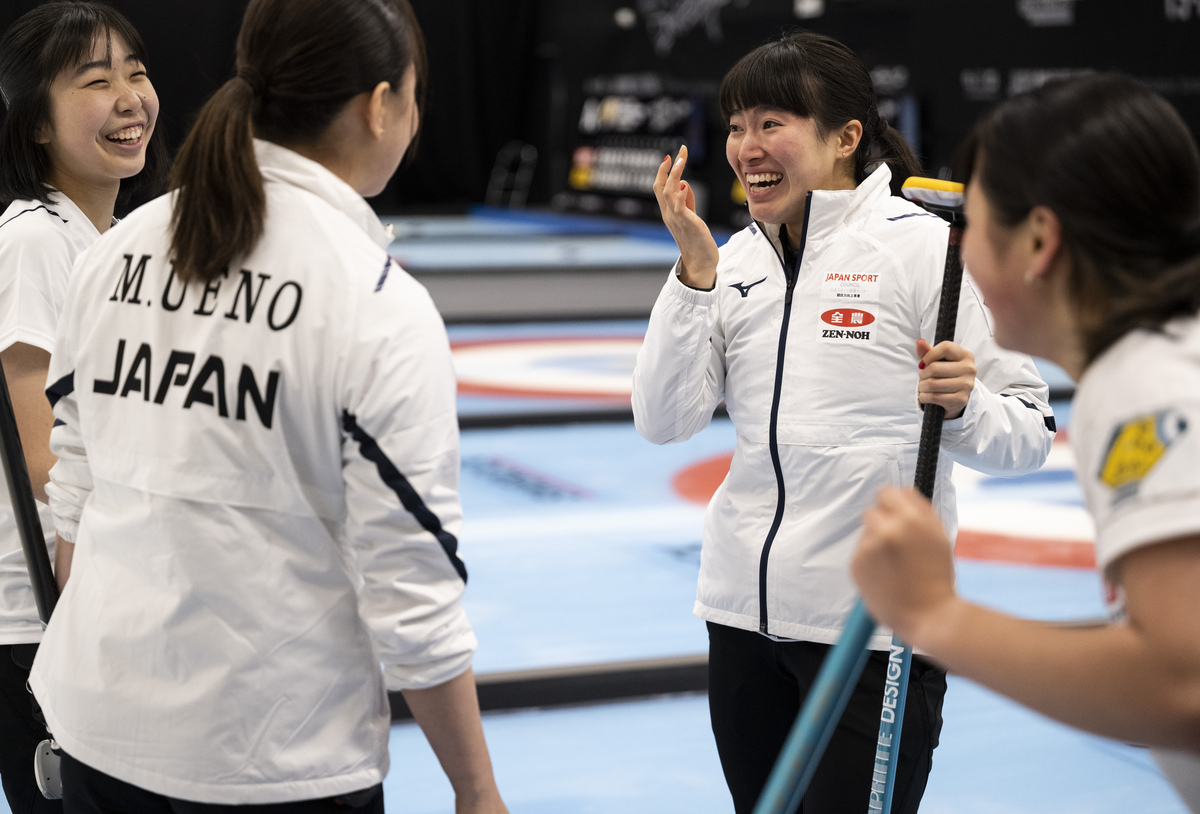 In the eighth session of women’s round robin play, Korea met Canada, Norway played Latvia, Denmark faced off against United States, Japan met Switzerland and Scotland battled Sweden. With it being the final day of the round robin, each game had added importance.

Norway and Latvia had a close game, trading scores of one and two until the seventh where the score was tied 5-5. After giving up a steal of one to Latvia in the eighth , Norwegian skip, Eirin Mesloe made a difficult take-out in the ninth to score three and take the 8-6 lead.

Latvia scored two in the tenth end to take the game to an extra end. With a draw to the four-foot, Norway scored the game-winning point, making the final score 9-8.

Eirin Mesloe spoke after the game saying, “Before the last shot, I was telling myself, ‘calm down, normal weight is good, and you can do this’. Now that we have qualified, we are very happy.”

The first two ends were blanked between Japan and Switzerland. Japan scored one in the third, which Switzerland followed with two of their own in the fourth.

Swiss third, Malin Da Ros, who was also celebrating her birthday, spoke after the game,  saying “It was a hard fight, so we are very happy to win. I love curling, so this is a nice birthday present.”

Canada took control of their game against Korea with a score of four in the fifth end, followed by a single steal in the sixth.

The Koreans managed to score singles in the seventh and eighth ends, but with a Canadian score of three in the ninth, the game was over with a 10-3 final result n Canada’s favour.

Denmark had a tough game against United States, as the Americans left no room for the Danish to score. After a score of three in the first end, United States stole ten consecutive points to force the Danish to concede the 13-0 game.

Sweden came out strong against Scotland this morning, scoring two points in the first end and stealing twos in the second and third ends. Scotland fought back though, scoring two in the fourth and seventh ends.

Sweden, however, didn’t allow Scotland any more chances, scoring two in the eighth and stealing two more in the ninth to close the game with an 11-4 victory.

Before the men’s last round-robin session two places were up for grabs in the weekend’s play-offs. Scotland and Germany already qualified prior to this session, and now played Switzerland and Norway, respectively, who both had play-off hopes before this session.

Canada met hosts Sweden, knowing that they needed a win and certain results coming their way in other games for them to qualify. United States played New Zealand with exactly the same in mind. In the fifth game of the session Korea and Italy met.

United States came out strong against New Zealand, who were looking for their first win. After blanking the first end, the Americans put points on the board in the following five ends to lead by 10-0. The Kiwis scored a single for 10-1 in the seventh, and then conceded defeat.

Canada and Sweden were tied at 2-2 at the half-time break. In the second half, Canada let Sweden score only a single in the seventh, while they put points on the board in three ends. Canada were leading the game by 6-3 after nine ends and eventually ran Sweden out of stones in the tenth.

After their victory and play-off qualification, Canada skip Owen Purcell said, “We played a good game. Especially in the second half, we played extremely well. In the first half we were struggling a bit, we were failing at executing a couple shots, but I think that towards the second half we really dialed it into another gear, and I think we played really well.”

“It really was a game of patience. We decided halfway through the event that that’s kind of how we wanted to play, just a little bit more patient, not trying to force things as much, and I think we’ve been doing a really good job at that so far. Everything has been working so far, so if it’s not broken don’t fix it”, he added.

Scotland and Switzerland had a tight contest, with the one-point lead exchanging hands six times in eight ends. In the ninth, Scotland were leading by 6-5, and managed to steal a single for 7-5. In the tenth, the Scots stole one more for an 8-5 final result.

Germany and Norway battled all the way until an extra end as they were tied at 6-6 after ten. In that extra end Norway had an open take-out to score one, win the game and qualify for the semi-finals. Their skip, Grunde Buraas executed the shot perfectly and secured Norway’s spot in the semi-finals.

After their victory, Buraas said, “We had a tough couple of days leading up to this, so we knew we had to win to be able to go to the play-offs. It was so good to get Lukas back here. He has come and been a part of us and helped cheer us on and it just really lifted the mood. We’ve played this team a couple of times before, and we know our style suits playing against them.”

In the fifth game Korea won over Italy by 9-3, partly due to a score of three in the fourth end and three consecutive steals in ends seven, eight and nine.

These results mean that Scotland finished on top spot on the rankings and will play Norway in one semi-final, whose final position is fourth. In the other semi-final second-ranked Germany will meet third-ranked Canada.

The semi-finals will take place on Saturday (21 May) at 14.00 (Central European Summer Time).

Italy, Sweden and New Zealand finished at the foot of the rankings, and therefore got relegated to the World Junior-B Curling Championship 2023.

Norway took an early 4-0 lead against United States, scoring three in the fourth end and stealing a single in the fifth end. United States fought back, scoring one in the sixth, and putting single steals on the board in the seventh and eighth ends. United States, however, could not catch up, and Norway won the game by 7-3.

Both Norway and United States have qualified for the semi-finals prior to this session.

Sweden had the biggest scoring end of the championship so far, in their game against Korea. After scoring two in the second end, the Swedes put a massive six on the board in the fifth end, to claim an 8-3 lead going into the break.

With singles in the seventh and ninth ends, Sweden forced Korea to concede, with a final score of 10-5. Based on their place in the standings, Korea was relegated to the World Junior-B Curling Championship 2023. Sweden’s play-off fate was dependant on the Canada-Japan match, Sweden needing Japan to win.

Switzerland and Latvia played a hard game, both teams wanting to have the best chance at a play-off spot. Switzerland scored two in the second end, which Latvia followed with two singles in ends three and four.

After single-point exchanges in the fifth and sixth ends, Switzerland captured the lead with a score of two in the eighth end. With another single in the tenth end, Switzerland claimed the 6-4 victory over the Latvians.

Like Sweden, Switzerland’s and Latvia’s play-off hopes were left to be determined by the game between Canada and Japan, the Latvians and Swiss needing Canada to win to advance.

Despite being out of play-off contention, Canada brought the energy to their game against Japan, taking the initial 2-0 lead. Japan scored three in the fifth end and stole one in the sixth, for a 4-2 lead. Canada followed that with two singles to tie the game at 4-4.

In the tenth end, the score was tied up by the Canadians and the game went into an extra end. Japan played a successful take-out in the extra end for the 6-5 win, thus qualifying themselves and Sweden for the final two spots in the play-offs.

Japanese skip, Yamamoto Sae spoke after the game saying, “We were very nervous before the game, but we just tried to enjoy it and not have regrets. We are just so happy to have qualified.”

Canada became the last team to be relegated to the World Junior-B Curling Championship 2023.

After watching the end of the Japan versus Canada game, newly qualified Swedish skip, Moa Dryburgh expressed, “I’m shocked. I was really nervous watching Japan’s last shot. Now I am so happy I don’t know what to say.”

The match between Denmark and Scotland was dominated by the Scottish who, after singles in the third, fourth and sixth ends, took two in the eighth end followed by a steal of three in the ninth end to close the game. The final score was 8-4 for Scotland. Both Scotland and Denmark have been relegated to the World Junior-B Curling Championship 2023.