No teams undefeated after day four at World Juniors 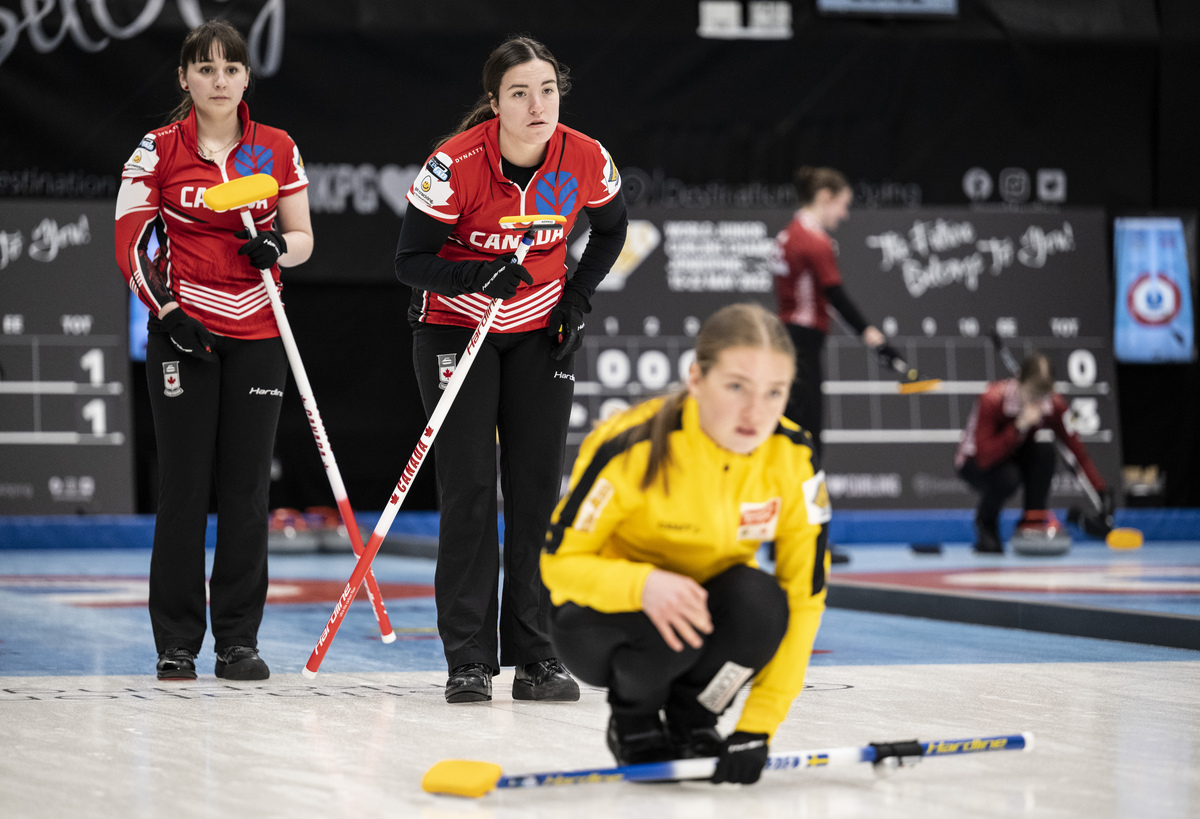 Wednesday morning marked the halfway point of the round robin. In the women’s fifth session, Canada met Sweden, Latvia aimed to continue their perfect record against Korea, Denmark looked to pick up their first win against Japan, United States faced Switzerland, and Norway strove to remain undefeated against Scotland.

The first end of the game between Norway and Scotland was lively, with nearly all stones in play. This worked out well for the Norwegians who made a draw for three to take the early lead.

Scotland quickly responded with a score of two in the second end, which Norway matched in the third.

By the seventh end, the score was tied at 6-6, the Norwegians with hammer. Scoring two in seven and one more in nine, Norway claimed the 9-7 victory and maintained their perfect record of 5-0. Scotland are now tied with Canada in eighth place at 1-4.

It was a tight battle between the Canadians and the Swedes. Exchange of single points in the second and third ends were followed by a two for Sweden in the fourth, and a three for Canada in the fifth. The score was 4-3 at the half-time break, Canada in the lead. In the sixth end, Sweden overtook the lead with a three-ender, followed by a steal of two in the seventh to go up 8-4.

Canada reduced the gap with a score of two in the eighth, followed by a steal of two in the ninth to tie the game going into the tenth. With the hammer, Sweden scored a single in ten and won the game, 9-8. When asked how it felt to compete in Sweden, skip, Moa Dryburgh replied, “It’s amazing, it’s so much fun. This is the place we want to be.”

This result makes Canada drop to 1-4, while Sweden move up to fourth place with 3-2.

The face-off between Latvia and Korea had a slow start, with blanks in the first two ends. Using the last-stone advantage however, Korea increased the intensity with a score of three in the third.

Latvia got on the board with two in the sixth, but Korea could not be defeated, scoring four more points by the ninth end, and closing the game with an 8-2 victory.

This drops Latvia to second place with a 4-1 record and moves Korea up to sixth place at 2-3.

Japan started off strong in their game against Denmark, scoring two points on an open take-out after a narrow miss by the Danish team. After trading single points in the third and fourth ends, Denmark scored two in the fifth and one in the seventh to tie the game at 4-4.

With single points in the eighth and ninth ends, Japan counteracted every chance Denmark had of scoring two to tie in the tenth end. This gave Japan the 6-4 win.

Japan skip Yamamoto Sae said, “We are happy to pick up this third win. Our good communication helped us make our shots.” This puts Japan at 3-2, and Denmark at 0-5.

After blanking the first end, United States scored two points in the second in their match versus Switzerland. The Swiss quickly responded with a two in the third end, tying the game.

The second half of the game was filled with single-point scores, until a score of two by United States in the ninth to take a 6-4 lead.

In the tenth end, Switzerland needed two to tie the game, but United States didn’t let up, winning the game by 6-4.

This result puts United States at 4-1, tied with Latvia for second place, while Switzerland sit in sixth place at 2-3.

In the only men’s session of the day Sweden took on Italy, United States played Norway, Scotland and Canada met each other, while Korea saw Germany. In the last game of the session Switzerland met New Zealand.

Both Sweden and Italy were looking for their second win when they met in this session. The teams were tied at 2-2 after four ends, and following three blanks, still at 2-2 after seven ends.

Italy took their one in the eighth to go up, 3-2. As single-point scores were exchanged in the two remaining ends, Italy won by 4-3.

Afterwards, Italian skip Giacomo Colli said, “This win was very important for us for not relegating back to B. We played probably the worst game of our tournament since the start, but we managed to bring home the win somehow. We are happy with the win but not with the performance.

“Our coach told us to move faster, to bring energy back to the game and we were telling each other ‘come on, hurry up, we have to make these shots’, and we ended up with the win and it was good for us,” he added.

United States started their game against Norway with a single steal. The teams then exchanged two-point scores and singles to go into the break with 4-3, United States leading.

In the following four ends United States forced Norway to take singles while they managed to score twos. This resulted in an 8-5 victory for the Americans and it also meant the first loss for Norway.

After their victory, United States skip Daniel Casper said, “It was a little rocky, we had some trouble figuring out the ice throughout the whole game, but we made the right shots when we needed to, and kept talking to each other, which is always what we rely on.”

Speaking about their upcoming round-robin games, he added, “We need to just keep having fun. We play our best when we have fun. Remind ourselves that we’re at a great event like this, a potentially once-in-a-lifetime opportunity. I think if we just relax and enjoy ourselves, we’ll play well.”

Undefeated Scotland played Canada, who were looking to improve on their two-three win-loss record.

Scotland were leading the game by 3-2 at the half-time break. Canada made a breakthrough in the sixth with a score of three to go up, 5-3. Scotland, however, responded with scoring two for 5-5 in the eighth. After trading singles, the game went into an extra end.

In the eleventh end Scotland held the hammer. Their skip elected to play a heavy take-out on the Canadian shot stone that was sitting frozen on the four-foot. James Craik wasn’t successful with his shot, and Canada stole a single and claimed the victory, 7-6.

After the game, Canada skip Owen Purcell said, “I’m feeling great. The guys are playing good and we made a couple shots there in the last end. It was pretty difficult, we had a couple picked rocks and it was hard to bounce back after that, but we made it happen.”

Korea were only able to pick up single points in their game against Germany, in ends number three, five and seven. The Germans however managed to respond with two-point scores twice. Moreover, they followed up a single score of theirs with a two-point steal. It meant that Germany won the game by 7-3 and picked up their fifth win of the week.

Switzerland came out strong in their game against New Zealand. After blanking the first end, they scored three in the second and stole three in the third to go up, 6-0.

New Zealand got on the board with two in the fourth, for 6-2.

In the second half of the game New Zealand were only able to score a single in the eighth, while Switzerland put three on the board once again in the ninth. The Swiss eventually won by 11-3 in nine ends.

After this session there is a three-way tied on the top of the rankings between Germany, Norway and Scotland, who all have five wins and one loss so far. They are followed by Switzerland (4-2). Canada and Korea both have a three-three win-loss record, while Italy and United States share seventh place (2-4). Hosts Sweden are ninth (1-5), while New Zealand sit at the foot of the table, looking for their first win.

In the third session of the day, the women battled to move up in the standings. Latvia took on Scotland, Sweden faced Japan, Norway played Switzerland, Denmark met Canada, and United States took on Korea.

The game between Norway and Switzerland saw a close race for victory, with the two teams being tied at 5-5 after eight ends. Norway stole a single in the ninth, which left Switzerland with the hammer going into the tenth.

Despite only needing two points to win the match, Switzerland scored four, bringing the final score to 9-6, and handing Norway their first loss of the championship. Norway are now at five wins and one loss, while Switzerland are at three-three.

The Canadian team bounced back after a loss this morning. Scoring three in the first end and two in the third and fifth ends against Denmark, the Canadians had a strong lead of 7-2.

Denmark didn’t give up though and scored their own three-ender in the sixth, closing the gap to two points. After the exchange of two points in the eighth and ninth ends, Denmark decided it was enough and conceded the 11-7 victory to Canada.

After suffering their first loss in the morning session, Latvia was hungry for a win this evening. They had to face Scotland, who were not going down without a fight.

In fact, Scotland held the lead the entire game, ultimately scoring a single in the tenth end to win 7-5 over the Latvians. This gave Latvia their second loss of the championship and dropped them to a 4-2 record.

Korea had an incredible comeback in their game against United States. Scoring three points in the second end, stealing one in the third and scoring four in the seventh, it looked like United States was going to run away with the game.

Korea however, pulled off a five-ender in the eighth end to bring themselves within one point of United States’ lead. With a score of two in the ninth, United States carried a three-point lead into the tenth end, Korea with hammer. Though Korea scored two in the tenth end, it wasn’t enough to overcome United States. The final score was 10-9 for the Americans.

The game between Japan and Sweden was brief, as the Japanese could not be stopped in their search for victory. Sweden took a single point in the third end, which Japan followed up with a score of two in the fourth, a steal of two in the fifth, and two single steals in the sixth and seventh ends.

Japanese skip, Yamamoto Sae, explained, “We had a lead in our first game against Korea, but we let them overtake us. Today’s game reminded us of that situation, so we just focused on each shot and were able to keep the lead.”

Following the two women’s sessions of day four, there is a tie for first place in the standings between Norway and United States (5-1). In second place are Japan and Latvia, with four wins and two losses each.

Switzerland and Sweden are tied for fifth spot, with records of 3 wins, 3 losses. Canada, Korea and Scotland are in a three-way tie for seventh place with 2-4 records. Finally, Denmark sit in tenth spot, searching for their first win after six games played.