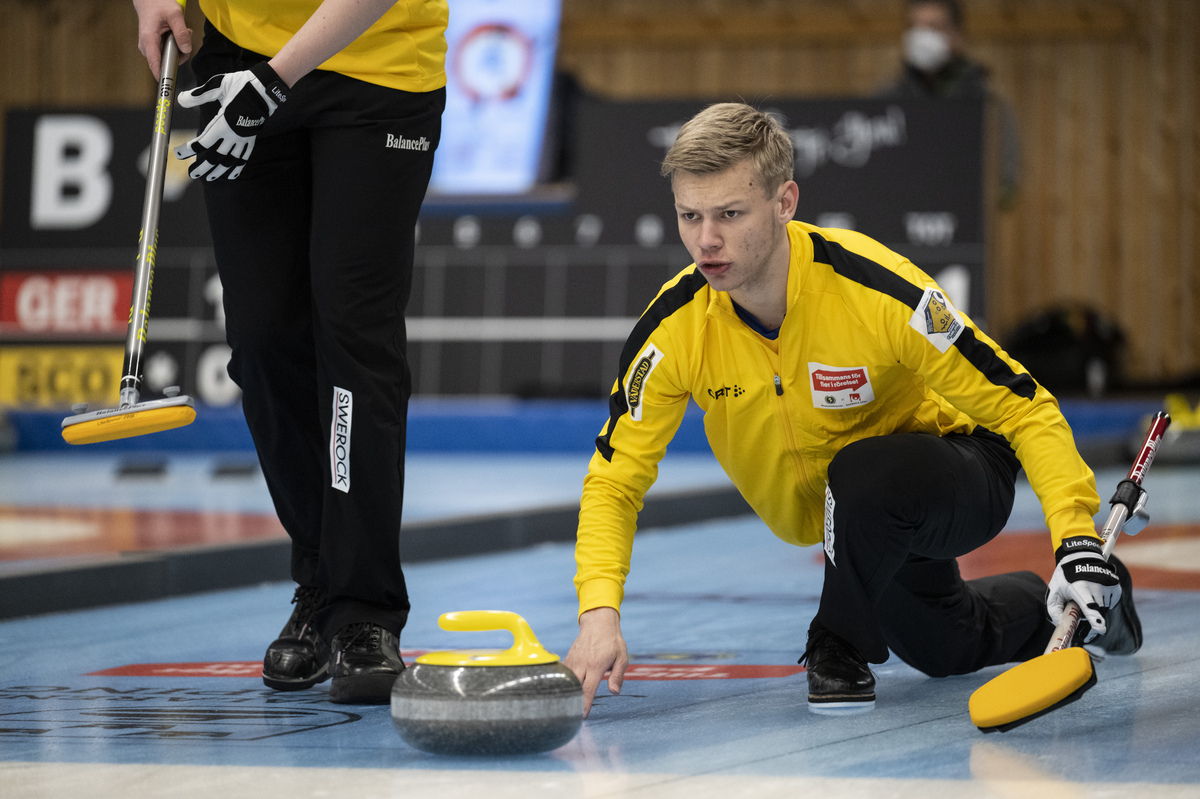 In Tuesday morning’s fourth men’s round-robin session Korea met hosts Sweden, Germany and Scotland met in the battle of unbeaten teams and Switzerland played United States. Italy took on Norway, while New Zealand were looking to pick up their first win over Canada.

The first half of the game between Korea and Sweden was low-scoring, as the teams went into the break with 4-2, Korea leading. The Koreans then stole four points in the sixth to widen the gap to six points, at 8-2.

After scoring a single in the seventh, Sweden conceded with an 8-3 final result.

After the game, Korea skip Lee Jae Beom said, “We didn’t start very well but we are on our way to finding our conditions back. Our results are really good, and we think we did a great job today. There was a mistake from the opposite side, but we just focused on our performance.”

Germany and Scotland were both looking to keep their record perfect in their match-up.

The Germans started better with a steal of one in the first end. The game was a close one throughout, as the teams were tied at 3-3 after four ends and at 4-4 after six.

In the ninth, with the score still being 4-4, German skip Benjamin Kapp wasn’t perfect with his difficult double take-out attempt, and opened the door for two for Scotland. Scottish skip James Craik took this opportunity with a perfect draw and Scotland took a 6-4 lead.

In the tenth, Scotland ran Germany out of stones, making 6-4 the final result. This victory kept Scotland’s record perfect and now they are leading the standings with four wins and no losses, sharing top spot with Norway who also won in this session.

Both Switzerland and United States were looking to collect a second win when they played each other in this session.

Switzerland took a big step towards reaching this goal by scoring four in the fifth to go into the break with 6-2. United States replied with two in the sixth for 6-4.

However, only single-point scores were traded in the remaining four ends, which resulted in an 8-6 win for the Swiss.

After the game, Swiss fourth player, Anthony Petoud said, “We had a big four, so we were just trying to manage the score and keep the advantage.”

Talking about his experience at the World Juniors, he added, “Playing with the Swiss flag on our backs is always special. Just enjoying the game.”

Undefeated Norway saw Italy in this session, who were aiming at their second win of the event. In the first four ends Norway played a textbook game, scoring twos with hammer and forcing the Italians to take a single when they had last stone.

After blanking the fifth, Italy manufactured a score of two to tie the game at 4-4.

Norway responded with their own two points in the seventh. They once again forced the Italians to take their one in the eighth and the teams went into the ninth end with 6-5, Norway leading.

The Norwegians blanked the ninth end and carried their hammer over to the tenth. In that end Norway scored two for an 8-5 final score.

This win means that Norway kept their perfect record and now share the top spot on the rankings with Scotland.

New Zealand were 3-1 down after fours ends against Canada.

In the fifth, the Canadians didn’t have last stone and filled the house with their own stones. New Zealand skip William Becker needed to make a difficult hit-and-roll for a single. He just did that and cut down the Canadian lead to one point.

In the second half, Canada switched gears and after scoring two in the sixth, they stole altogether five points in the next three ends. It was 10-2 on the scoreboard after nine ends when New Zealand conceded defeat.

The women took to the ice for the afternoon session. Denmark sought their first win against Latvia, Canada took on the undefeated Norway, United States battled against Sweden, Scotland and Japan faced off, and Switzerland rivalled Korea.

Latvia went into their game against Denmark hoping to maintain their perfect record, while Denmark fought to claim their first victory of the championship. Capitalising on a miss from the Latvian team, Denmark scored three in the third end to take a one-point lead.

Denmark recaptured the lead with another score of three in the ninth end. Despite the Danish efforts to take away Latvia’s opportunities to score in the tenth, Latvia scored four for the 9-7 victory. Latvia remain undefeated at 4-0, while Denmark sit in tenth place at 0-4.

On the next sheet over, Canada duelled Norway. After five ends, Norway were leading by 3-2. In the sixth, Norway scored three points to take a 6-2 lead. The Canadians fought back however, scoring three of their own in the eighth end.

Ultimately, with a big score of four in the ninth end, Norway were out of reach for the Canadians, earning an 11-5 final score. Norway now sit at the top of the standings, tied with Latvia at 4-0. Canada is holding seventh place alongside Korea and Scotland, with a record of 1-3.

Sweden were the stronger team in the first half of the game, holding a 4-2 lead going into the half-time break. United States did not give up however, scoring a single point in the sixth end, stealing singles in seven and eight, and closing the game with a steal of two more.

The final score was 7-4 for United States. With a three-one win-loss record, United States hold onto third place, while Sweden fell to 2-2, sharing fourth place with Japan and Switzerland.

The Scottish took on the Japanese, in a match-up that saw Japan controlling much of the play. With an early lead of 4-0 after four ends, Japan continued to put pressure on Scotland, scoring another single point in the sixth and two in the eighth.

The Scottish managed to score two in the seventh end and a single in the ninth, but couldn’t surpass the Japanese’s score. The final result was 7-4 for the Japanese.

Japan skip, Yamamoto Sae, remarked, “I knew the Scottish team was great, so we had to focus on communication and making our shots together.” Japan now sit at 2-2, Scotland at 1-3.

In the final game of the session, Switzerland bounced back after a couple of losses and played against Korea with vigour.

Scoring two in the second end, three in the fourth and another two in the sixth end, Switzerland shut the Korean team down after seven ends, with a decisive victory of 8-2.

Swiss skip, Xenia Schwaller, spoke after the game, “We’ve waited a long time to come here so it’s cool to finally be here and compete.”

In the men’s fifth session Germany were up against United States, Sweden faced New Zealand, Norway met Korea, Canada played Switzerland, while Scotland and Italy played against each other.

Both Germany and United States lost their morning game and wanted to improve on their record of the day. Germany came out strong, scoring three in the second and two in the fourth end, while forcing United States to take a single in the third. These meant a 5-1 half-time score, Germany leading.

Germany kept putting the pressure on United States in the second half and stole a single in the sixth. After an exchange of two-point scores in the following two ends, United States conceded the game with an 8-3 final result, Germany victorious.

Hosts Sweden and New Zealand were both looking for their first win at the championship when they met in this session. Sweden had an exceptional start to the game, scoring four in the first end and stealing one in the second.

New Zealand got onto the scoreboard with a single in the third for 5-1. In the fourth, Sweden skip Axel Landelius came up short with his final draw and New Zealand stole one for 5-2.

New Zealand skip William Becker missed his take-out attempt on his last stone in the fifth, which gave Sweden the opportunity to score four. Landelius made a perfect draw and the teams went into the break with 9-2, Sweden leading. After scoring a single in the sixth, New Zealand conceded defeat with a 9-3 end result.

After their first win of the event, Landelius said, “It feels amazing. Finally, a first win and we’re looking for more. We have struggled a bit, but before this game we had a chat and like ‘now it’s time’, we went out and we performed at our best.

Reflecting on playing on home ice, he added, “It’s amazing, playing at home. We’re pretty familiar with this arena, so it feels really great.”

Table-toppers undefeated Norway took on Korea. The teams were tied at 1-1 after three ends, but in the fourth, Norway made a breakthrough and scored four.

Norway followed that up with a single steal in the fifth to go into the break holding a 6-1 lead.

In the sixth, Norway filled the house with their own stones and Korea skip Lee Jae Beom was left with a difficult angled run-back with his last. He wasn’t successful with the attempt which resulted in a steal of six. At this point Korea condeded to Norway with a 12-1 end result. With this victory Norway keep their unbeaten record intact and are still leading the standings, along with Scotland.

Canada and Switzerland both had a two wins, two losses record coming into this session, and both wanted to add this game to the win column.

Canada were the first to get on the board, scoring one in the third end. Switzerland responded straight away for a score of four.

After another single score by Canada in the fifth, it was a 4-2 game at the break, Switzerland leading. The teams traded two-point scored in the sixth and seventh to keep the two-point difference.

The North Americans stole a single in the ninth to reduce the Swiss lead to a single point. However, in the tenth end Switzerland scored one for a 7-5 final result.

Still unbeaten Scotland saw Italy who were seeking their second victory of the tournament.

It was a close game in the first half, as the teams went into the break with a 4-3 score, Scotland leading. In the sixth end Scotland stole two points and followed that up with a steal of four in the seventh. With a 10-3 result after seven ends, Italy conceded defeat. This win means that Scotland keep their perfect record and lead the standings along with Norway.