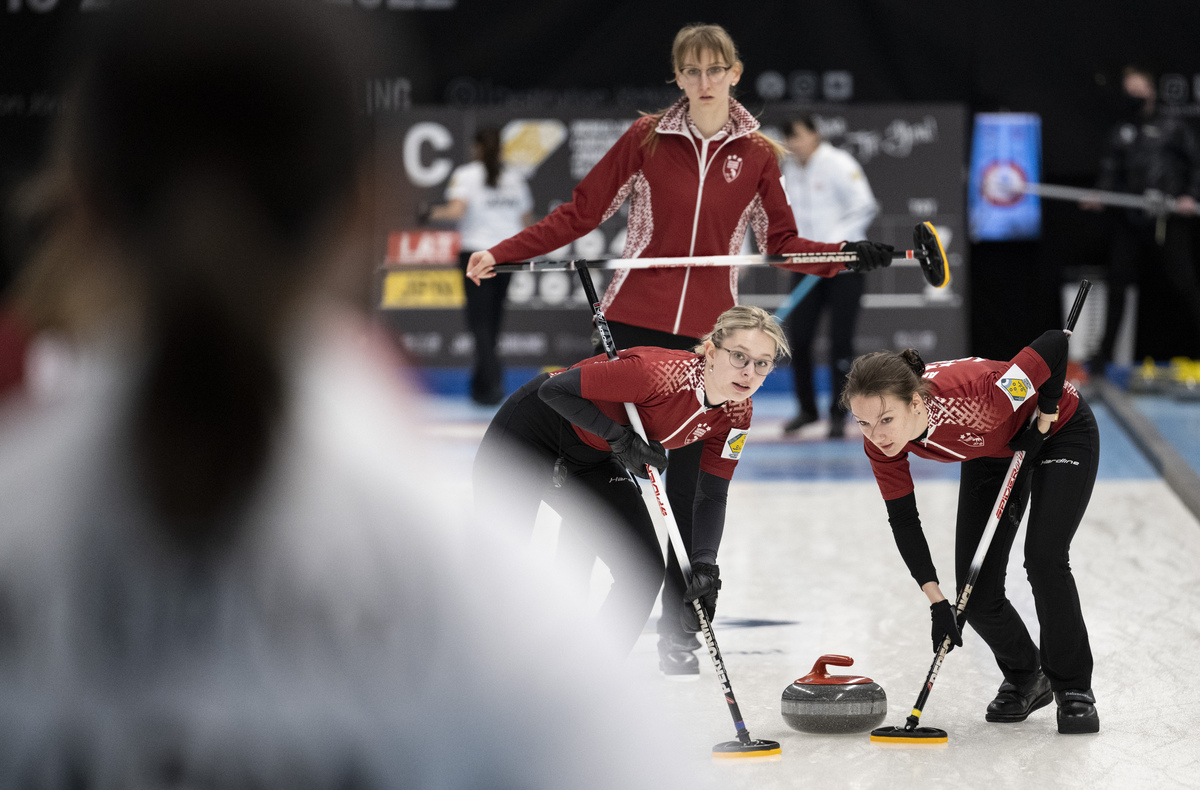 Latvia in their game against Japan @ WCF / Cheyenne Boone

It was the women’s turn to play their second session at the World Junior Curling Championships on Monday morning in Jönköping.

It was a back-and-forth game between Scotland and United States. The Scottish had the initial lead with a draw in the second end for three points. United States responded in the sixth end with a hit for four to bring the score to 5-4 in their favour.

In the ninth end, Scottish skip, Fay Henderson, made an angle double take-out on her first stone, leading to a score of three points, as well as a two-point lead going into the tenth end. Using their last-stone advantage, however, United States scored three in the tenth to win the game by 9-8.

Korea had an impressive showing against Denmark, scoring six points in the first four ends.

An angle run-back in the fifth end by Denmark’s skip, Karolina Jensen, led Denmark to close the gap with a score of two. With a draw for one in the sixth end, and a steal of two in the seventh, Korea took the win over Denmark with a final score of 9-2.

Korean skip, Kang Bo Bae spoke after the game saying, “We had a bad start yesterday, but it’s getting better and we are looking forward to having another game today.”

Latvia came out strong against Japan, with a score of two points in the first end, and four in the fourth to take an early 6-2 lead.

Japan had a miss in the fifth end, giving Latvia a steal of one. It was followed by a steal of three in the sixth for a 10-2 Latvian lead.

The Japanese conceded after seven ends with a final score of 10-3 for Latvia.

In the Nordic battle, Norway claimed the early lead, stealing three points in the fourth end after a heavy draw by Swedish skip Moa Dryburgh.

Sweden responded with a draw against two in the fifth end to score a single for 4-1, Norway leading.

In the sixth, Norway attempted a hit, but rolled too far and gave up a steal of two. Norway bounced back with two points in the seventh end, and another point in the tenth end to ultimately claim a 7-5 victory.

After their win, Norway lead Ingeborg Forbregd said, “I was a little bit nervous at the end because it was a very even game, but it ended well.”

Commenting on her team’s goals at the event, she added, “We hope for a medal but it’s a high goal though. We take one match at a time.”

In the fifth game, Canada and Switzerland battled, each for their first win of the championship.

Canada scored two more in the fifth end, but once again, Switzerland responded with two to tie the game at 5-5 after six ends.

In the tenth, Canada, with the hammer and a one-point lead, closed the game with a draw for one and an 8-6 win.

In the men’s single session of the day, Italy took on Canada, Norway played Switzerland, New Zealand met Scotland, Germany and Sweden played each other, while United States took on Korea.

Title-defenders Canada were looking for their first win of the championship when they met Italy. After three ends, the teams were tied at 1-1.

Canada stole three points in the fourth when Italy skip Giacomo Colli was unsuccessful with his hit-and-roll attempt.

Canada went on to steal in the next two ends for 6-1 after six. Eventually, the Canadians won by 8-3 in just eight ends.

After their win, Canada skip Owen Purcell said, “It’s huge. It’s always difficult to bounce back from such a rough start that we had yesterday, but I thought that we did a really good job today and prepping for this game, and I think the guys played really well.”

“Something that was really helpful for us today was that we decided we wanted to come out with a little bit of fire, a bit of intensity, and I think that really worked in our favour this game” he added.

Norway had a perfect first day of the event, and wanted to keep their record intact when they played Switzerland, who had a one win, one loss first day.

In the second end, Swiss fourth player Anthony Petoud wrecked on a guard with his last stone. Norway capitalised on this miss and scored four points to take a 4-1 lead.

This end proved to be the difference in the game, as Norway eventually won by 9-6.

New Zealand were seeking their first win of the tournament when they met undefeated Scotland.

Scotland kept control over the game throughout, leading by 4-1 at the half-time break, by 7-4 after seven ends and by 10-5 after nine.

The Scots eventually ran New Zealand out of stones in the tenth and kept their perfect record at the tournament.

Germany were looking to pick up their third victory in Jönköping when they played hosts Sweden.

The Swiss forced Sweden to take only singles in the entire game, while they scored multiple points in three ends. This resulted in an 8-3 final score in eight ends.

Both United States and Korea had a one-win, one-loss Sunday, and were looking to improve on their record.

In the first four ends, Korea played a textbook game; scoring two with hammer and forcing United States to a single when they had last stone.

Korea played an exceptional sixth end, and after a perfect team shot to tap out an American stone, they scored four. Eventually, Korea won by 10-4 in eight ends.

After their win, Korea skip Lee Jae Beom said, “We started okay, but it was a little bit hard at the end, but I think the result came out nicely and we did a great job.”

Reflecting on their experience at the event, he added, “Being here in Sweden is awesome and beautiful. I can see many beautiful scenery here and the lunch is great.”

In the third session of the women’s round robin, Japan faced off against United States, Canada played Latvia, Korea took on Norway and Switzerland met Scotland. In the fifth game of the session Sweden played Denmark.

In the game between Japan and United States, after exchanging scores of three in the third and fourth ends, and twos in the fifth and seventh ends, the score was 8-6 for the Americans after nine ends.

Needing to score two to take the game to an extra end, Japan succeeded, tying the game at 8-8. In the eleventh end, United States had the hammer, allowing them to make the decisive shot to claim the 9-8 victory.

After their win, United States skip, Delaney Strouse expressed, “We definitely have goals of medalling, but with last year’s Worlds being cancelled, we just want to go out there and give it our all and enjoy the company together.”

Canada and Latvia put on an exciting high-scoring game. After a blank in the first end, Latvia used the last-stone advantage to score four in the second end, followed by a steal of three in the third.

Despite being down 7-0, Canada fought back, scoring two in the fourth end and stealing three more in the fifth. After exchanging scores of two in the eighth and ninth ends, Canada conceded to Latvia with a final score of 12-8. Latvia remains undefeated.

Another close game was seen between Korea and Norway. After holding a 4-1 lead after four ends, Norway gave up a single and a steal of two to Korea in the fifth and sixth, making it a tie game.

Norway increased the intensity however, with a score of three in the seventh end, and another two in the ninth, concluding the game with a 9-7 victory. Norway joins Latvia at the top of the standings.

Seeking their first win of the event, Switzerland showed off their skills in their game against Scotland. At the half-time break, Switzerland held a 5-1 lead, after a single steal in the fifth end.

Scotland responded in the sixth with a score of two, but it wasn’t enough to defeat the Swiss team, who scored another two points in the eighth and a single in the ninth to close the game.

The final score was 8-3 for Switzerland.

The home team, Sweden, bounced back with a win in this evening’s draw after a tough loss this morning. They faced the Danish team, who were seeking their first win.

Unfortunately for Denmark, Sweden played strongly, scoring one in the first end, two in the fourth, and a decisive four in the sixth. The game ended after seven ends, with a 7-2 victory for the Swedes.