Italy, Japan and Switzerland collect second wins of the day on Monday evening 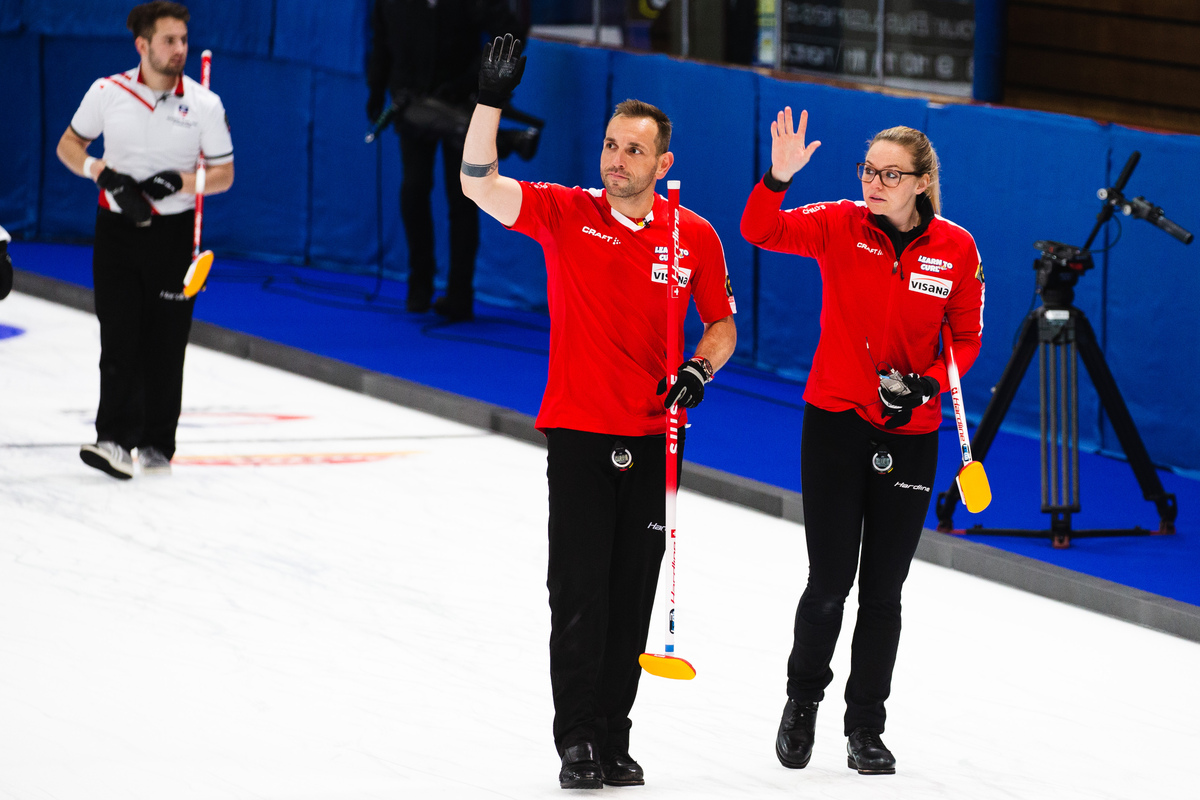 With the teams in Group A playing their fifth games in Monday evening’s ninth session of play, the round-robin section of the World Mixed Doubles Championship has now reached half-way.

Table-toppers Italy continued their unbeaten winning ways with a 9-7 victory over Estonia after an extra end, while second-placed Switzerland had a 9-3 win over Denmark.

Three other teams — Japan, Norway and Sweden — also had wins, to keep themselves in good shape for grabbing one of the three available play-off slots from the group, as they now share third place on the rankings.

Japan beat New Zealand by 8-2, Norway were 11-3 winners over Korea, and Sweden beat Finland by 8-3 in six ends.

In their game against Estonia, Italy opened with their customary two points, thanks to a draw by Olympic champion Stefania Constantini.

But in the sixth end, with the Italians still enjoying a 6-1 lead, Estonia’s Marie Kaldvee played a draw to score four points and bring her team right back into the game, reducing Italy’s lead to 6-5.

Another score of two by Estonia in the eighth end levelled the game at 7-7, and forced an extra end.

Eventually, in that end, Italy’s Constantini knocked out the Estonian shot stone to score two and win by 9-7, keeping Italy’s 100% record intact.

Afterwards, Constantini said, “Actually, I think we played well. They had a real comeback in the sixth end. But we really kept working. We knew we were playing and just had to remain focussed to the end.”

Switzerland took a 5-2 lead into the break in their game against Denmark, thanks to a steal of two in the fourth end.

In the fifth end, Denmark’s Jasmin Lander scored one point with a tap-back to reduce the Swiss lead to 5-3.

In the sixth Switzerland’s Alina Paetz hit out a Danish stone to score one and increase her team’s lead to 6-3. After this, Switzerland had a steal of three in the seventh end, to win by 9-3.

In their game against New Zealand, Japan took an early lead at 3-1 with a score of two in the third end.

After this, New Zealand had to resort to damage limitation in the fourth end, giving up a steal of just two points.

Another steal of two in the fifth end moved Japan closer to their eventual 8-2 win.

This was a third win in a row for Japan that moves them into joint third place.

After the game, their male player Yasumasa Tanida said, “This was a night game, so draw weight was a bit difficult, but we had a good performance.”

In the third end of the game between Sweden and Finland, with the Finns leading by 2-1, Sweden’s Isabella Wranaa played a tap-out on a Finnish stone to score five.

Sweden then had two single-point steals as they went on to win by 8-3 in six ends, to join the three-way third-place tie.

In the game between Norway and Korea, the Norwegians moved into a clear lead in the third end when Korean Kim Minji’s attempted tap-up did not work out, and Norway stole three points for a 5-1 lead.

In the sixth end, with Norway leading by 6-2, Korea’s Minji Kim was facing two Norwegian counting stones when she drew to score one point and reduce Norway’s lead to 6-3.

Then, in the seventh end, Norway’s Maia Ramsfjell sealed the game with a draw for five points, to win by 11-3.