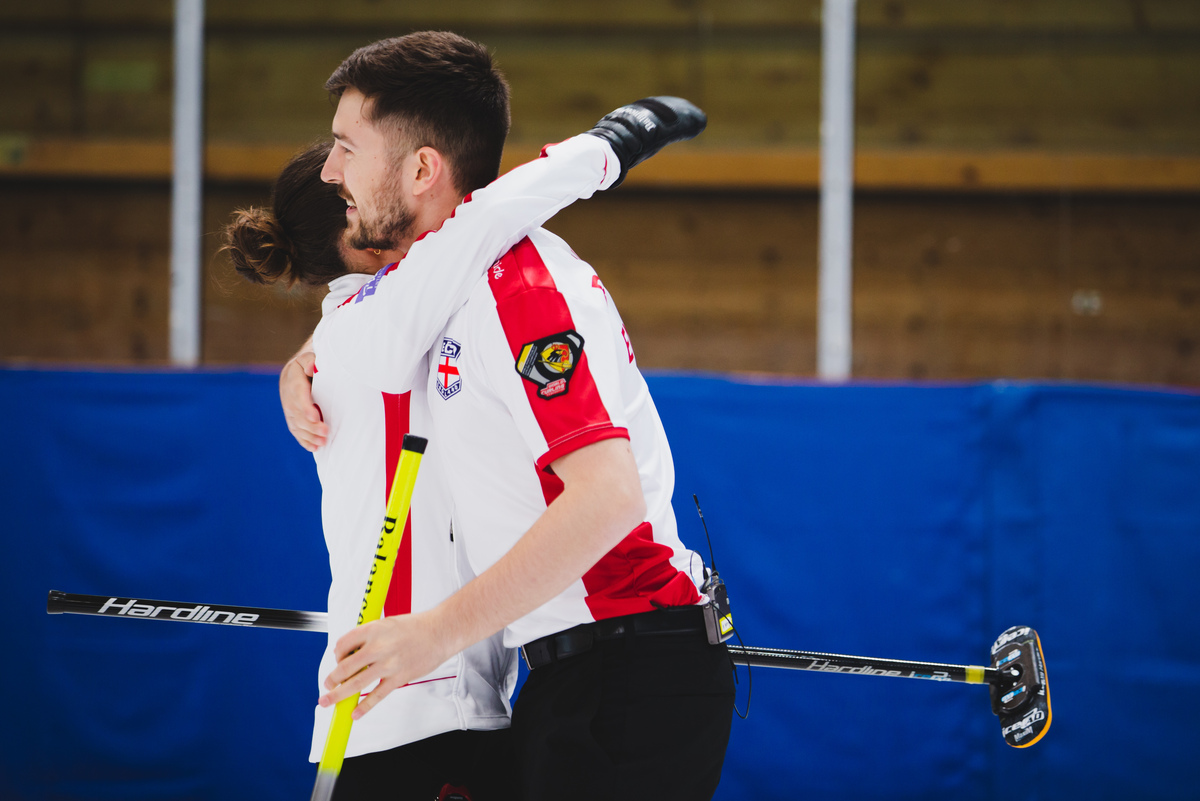 The Group B teams played their fourth games in Monday afternoon’s eighth round-robin session, and England recorded their first win by beating Turkey by 9-6, after an extra end.

Meanwhile, Scotland won over Canada by 8-4 in a top-of-the-table clash, while United States were 7-3 winners over Germany. These results leave Scotland and United States together in the joint lead, unbeaten so far, on four wins.

In other games, Hungary beat Spain by 9-6, and Czech Republic were 9-8 extra-end winners over Australia.

England started their game against Turkey with a steal of two when Muhammed Ucan’s last hit caused an English stone to jam on the way out of the house.

The teams went into the break with England leading by 3-2.

After a score of two by England in the fifth end, Turkey used their power play in the sixth to score two and reduce their deficit to a single point.

With the score tied at 6-6 after eight ends, England’s Anna Fowler played a double take-out with the last stone of the extra end, to score three points and win by 9-6.

After the game, England’s Ben Fowler put his finger on the key to his team’s success, saying, “We picked up on the ice a bit quicker today.”

Meanwhile, his sister, Anna said, “We feel absolutely fantastic. It was really nice to get the win. I think we played some good shots.”

She also commented on how it is playing with a sibling at this level, “I think we have a really good flow when we play and we have played a lot together, so we know how the other one is going to react. So, it definitely helps. It’s still fun!”

The game between Canada and Scotland was tight all the way, with the last stone being thrown away in three ends and the umpire’s measure being well-used throughout.

A measure was used in the fourth end, and it determined that a tap-up by Scotland’s Eve Muirhead produced a score of two, for a 3-2 lead at the break.

Scotland stole a single in the fifth end but, in the sixth, Canada’s Jocelyn Peterman played a draw for two, to level the game at 4-4.

In the seventh end, the Scots called their power play and Muirhead was eventually able to draw her last shot to score four points and take an 8-4 lead.

Canada ran out of stones in the eighth, to give Scotland their fourth win.

After this victory, Muirhead said, “It’s always a big battle, Scotland against Canada, and it was that today. As much as the scoreboard at the end didn’t look like that, it came down to those last shots.    It was a great game, Bobby played fantastic and it’s always nice when you both play well. It was great fun.”

Her partner Bobby Lammie added, “The steal of one in the fifth end allowed us to get the jump on them and control the game. Before that it was very close, but I think we controlled the draw weights in that game, and that was the difference.”

United States were joint leaders with Canada and Scotland when this session started. They faced Germany in this session and, in the first end, built up a strong position.

However, with the last stone of the end, Germany’s Pia-Lisa Scholl cut their position back and the Americans opened with a steal of two when it looked like it could be more.

In the fourth end, American female player Becca Hamilton played a hit which did not roll far enough, and had to settle for just one point, and a 3-2 lead at the break.

Later, in the seventh end, United States called their power play and Becca Hamilton played a draw for two points and a 6-3 lead.

In the eighth end, Scholl’s hit was too straight, giving the Americans another single steal and a 7-3 win that puts them into joint top spot with Scotland.

The game between Australia and Czech Republic went to an extra end.

With the score tied at 8-8, Czech Republic’s Julie Zelingrova had five seconds left on the clock when she played her final shot.

She put that final stone through a port between two Australian front guards to hit and score the one point that gave her team a 9-8 win, their second victory of the event so far.

In the fifth game of the session Hungary faced Spain.

In the fifth end, with the score tied at 3-3, Spain’s Oihane Otaegi played a tap-up to score three points and take a 6-3 lead.

However, in the sixth, Hungary’s Ildiko Szekeres was able to level the score, with a draw for three points.

The Hungarians then went on to win by 9-6 to place them in joint third spot on the rankings, alongside Canada, on three wins and one loss.