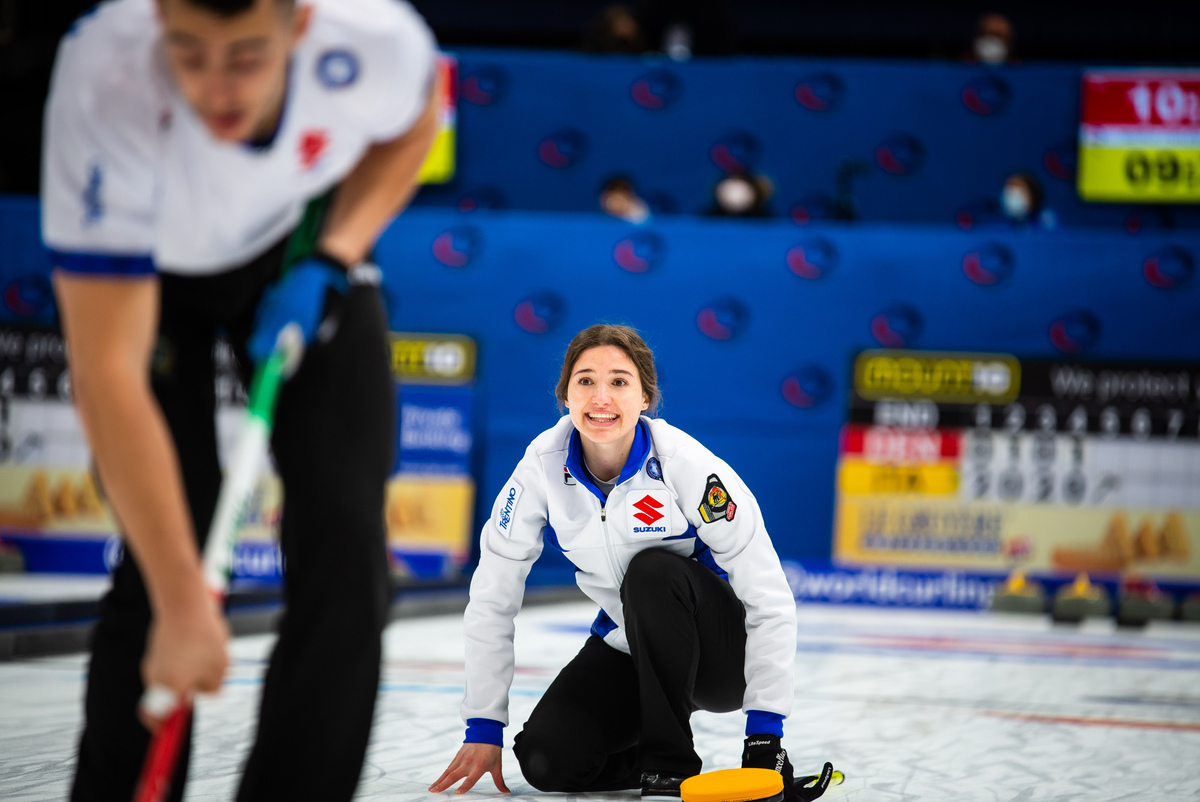 Italy consolidated their lead in Group A with an 8-3 win over Denmark in Monday morning’s seventh round-robin session and they remain the only unbeaten team in the group, on four wins.

Switzerland sit in clear second place, on three wins and one loss, thanks to a 7-2 victory over Finland. Behind these two teams, six teams share third spot, on two wins and two losses.

Other winners in this session were Estonia, Japan and Korea.

Italy opened with a score of two in the first end when Stefania Constantini drew her last stone into position.

Constantini produced further scores of two in the third and fifth ends. In the fifth, she played a take-out on a Danish stone to move onto a 6-2 lead, on the way to her team’s 8-3 win.

Denmark now join the group of six teams in third place on the standings.

Switzerland opened their game against Finland with a score of one in the first end, and then had steals in each of the next three ends to go into the break holding a 5-0 lead.

The Finns then opened their account with a score of two in the fifth end when Markus Sipila played a hit.

Switzerland then scored one in the sixth end when Alina Paetz was successful with a draw.

A further steal of one by the Swiss in the seventh end was enough to persuade the Finns to concede the game, with a final score of 7-2 to Switzerland.

Afterwards, a pleased Paetz said, “We’ve finally found draw weight. That’s the big thing in mixed doubles, you need to make sure the draws are there.”

Estonia had two key ends in their game against New Zealand. They scored five in the second for a 5-1 lead when Marie Kaldvee played a tap-back.

Later, in the fifth end, Kaldvee scored four with a draw to give her team a 9-3 lead.

Estonia stole two points in the sixth end for an 11-3 lead. A further steal of two by Estonia in the seventh end gave them a 13-3 win and they join the group in third place, while New Zealand are still looking for their first win.

After the game, Kaldvee said, “We tried to play our best game, as we do in every game. We’re just trying to get better every time.”

Her partner, Harri Lill added, “I think we performed ok and used the chances when we got them.  That was a good game for us.”

Japan faced Norway in this session and a steal of one for Norway in the sixth end gave them a 5-3 lead.

The Norwegians still led by 5-4 as the teams played the eighth end, but Japan scored two for the 6-5 win when a take-out attempt by Norway’s Maia Ramsfjell did not work out.

This result means that these two teams now join the group in joint third place.

The teams were level at 1-1 after two ends, but Korea had steals of three in each of the third and fourth ends to take a 7-1 lead.

Then, in the fifth end, although Sweden’s Isabella Wranaa played a hit, Korea still managed to steal four more points for an 11-1 lead.

Isabella Wranaa made amends in the sixth end when her hit moved several Korean stones to give her team a score of four, to reduce Korea’s lead to 11-5.

However, a score of one for Korea in the seventh end sealed their 12-5 win.

Afterwards, Korea’s female player, Kim Minji said, “We just tried to take one shot at a time. I feel that I had a better feel for the game compared to the previous games.”