Canada, Scotland and United States tied at first place in Group B 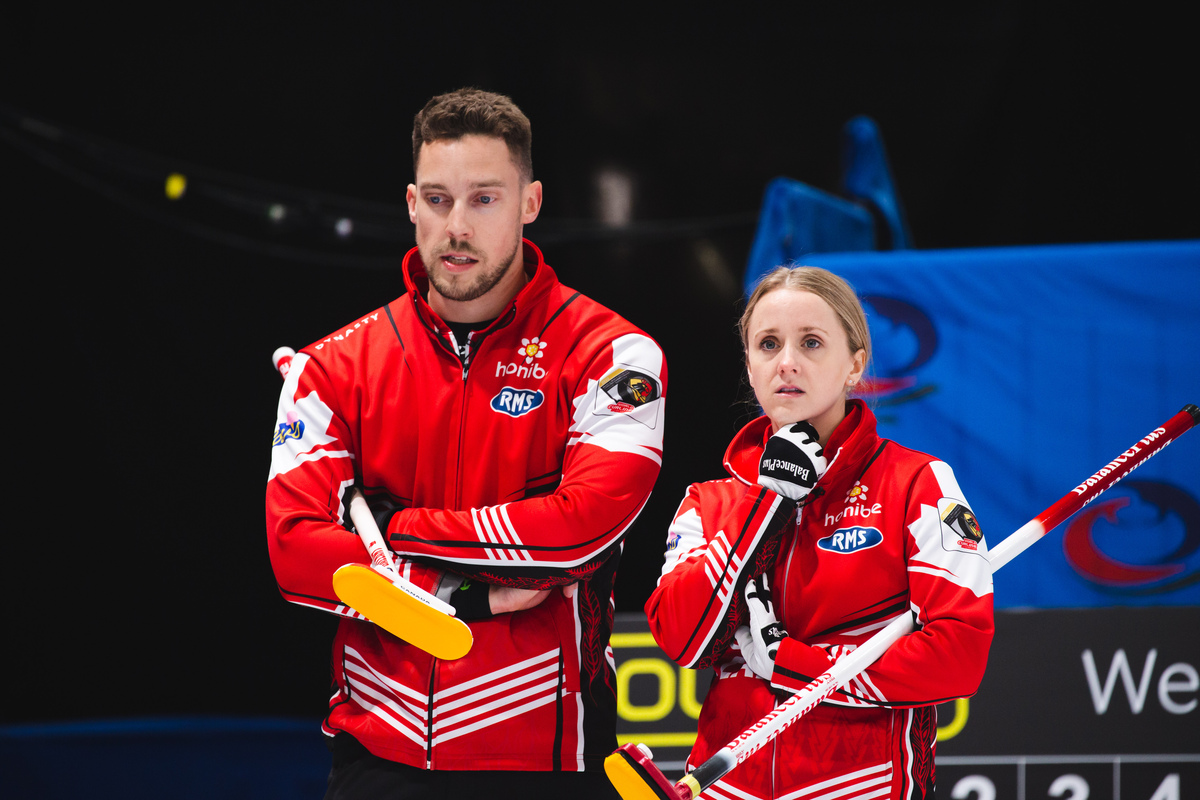 The B Group teams played in Sunday evening’s sixth round-robin session of the World Mixed Doubles Championship. Canada, Scotland and United States all won to stay locked together at the top of the group rankings, unbeaten on three wins each.

Canada beat Turkey by 10-5, Scotland were 9-3 winners over Czech Republic, while United States beat Spain by 8-2.

The other session winners were Germany, who beat Australia by 6-5, and Hungary, 8-6 winners over England.

Canada played Turkey, who were still looking for their first win. The Turks scored one in the first end and then Canada could only respond with one point in the second when Jocelyn Peterman’s final stone of the end caught a front guard on the way into the house.

In the fifth, Peterman had another wreck with her final stone, but Canada still managed to score three from the end to take a 5-2 lead. However, Turkey responded in the sixth, when Mohammed Ucan scored three with a draw, to level the game at 5-5. Canada then responded with a score of five in the seventh, using their power play when Peterman drew for a 10-5 lead. Turkey then conceded in the eighth end.

After the game, Canada’s Brett Gallant said, “We just had to be patient, but we played well. We had a really good power play (in seven) and made five good shots.”

In the game between Scotland and Czech Republic, the Scots led by 4-2 at the break. The Czechs reduced Scotland’s lead to 5-3 in the sixth when Julie Zelingrova played a delicate tap to get inside two Scottish stones. However, when they came to play the seventh end, Scotland’s female player Eve Muirhead scored four points with a hit and roll for a 9-3 score-line, after which the Czechs conceded.

In the sixth end of the game between United States and Spain, with the Americans leading by 5-1, Spain had the chance to score two points, but Oihane Otaegi was heavy with her final draw, scoring just one. In the seventh, America called their power play and Becca Hamilton played a draw for three points, to win by 8-2.

Australia were on top in the early part of their game against Germany, leading by 5-2 after six ends.  But, in the seventh, Germany’s Pia-Lisa Scholl played a hit to score three points and level the game at 5-5. The Germans then stole a single point in the eighth for a 6-5 victory, when Tahli Gill was heavy on a draw to the eight-foot to win.

Hungary dominated their game against England, stealing five points in the first three ends, and then scoring three in the fifth end to lead by 8-2. England recovered after this, but Hungary still emerged as 8-6 winners, leaving England at the foot of the table without a win yet, alongside Australia and Turkey.

After the game, Hungary’s Gyorgy Nagy said, “I think that in the morning we didn’t play as well as we did tonight. We were much more focussed in the evening, and it showed in our game as well. From the first moment on, we put pressure on them. Despite the fact that we played until the last end, I think that we dominated this game.”