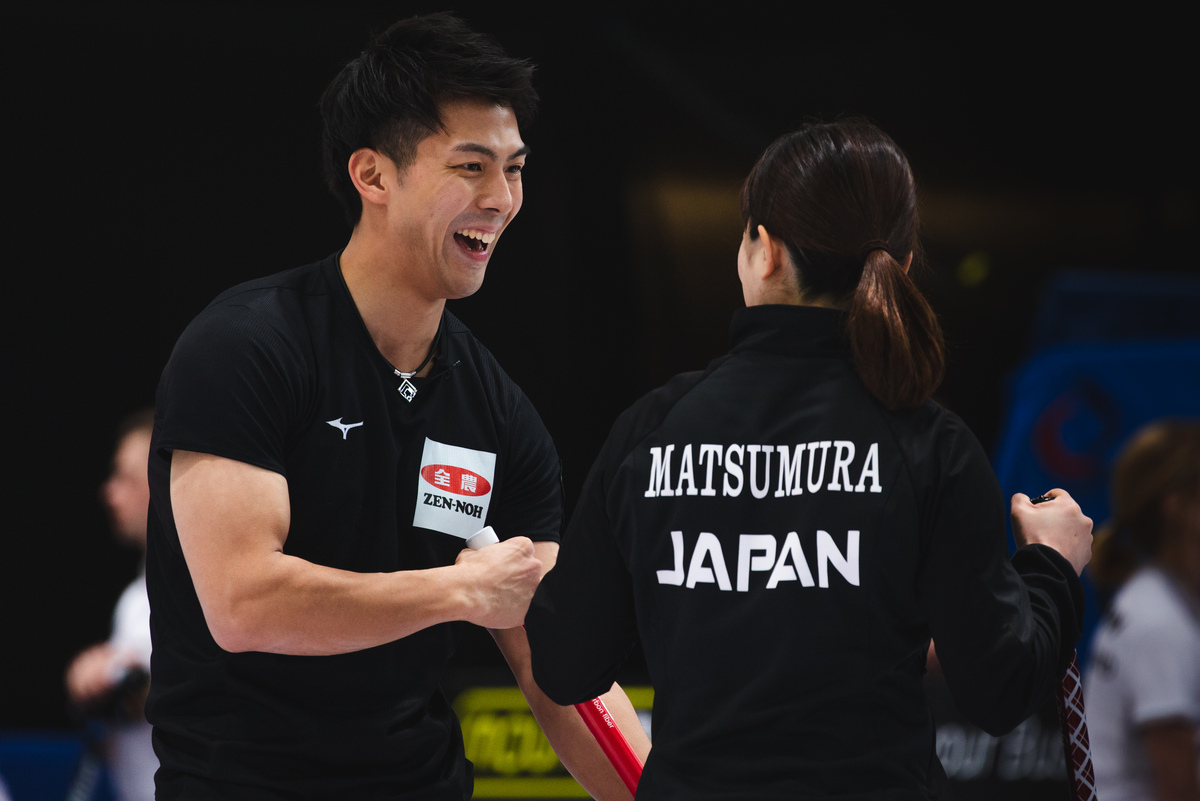 In this session, both Finland and Japan recorded their first wins — Finland defeated New Zealand by 11-1 in just six ends, while Japan were 8-6 winners over Switzerland.

Meanwhile Italy had a tight 7-5 victory over Korea, to move into a clear lead at the top of the rankings, on three wins and no losses.

In the other games, Norway beat Denmark by 9-2, while, after the first extra end of the event, Sweden won over Estonia by 10-8.

Finland started their game well against New Zealand when their male player Markus Sipila played a take-out in the first end for three points.

Later, in the fifth end, he scored four points with a draw, for a 10-1 lead.  Then, when the Finns had a single steal in the sixth end, for 11-1, New Zealand conceded.

After the game, Sipila said, “We’re feeling quite relieved at the moment. Our first two games were very tight. We thought we could win them, but lost. It is a relief now that we are performing at the level we expect of ourselves.”

Japan went into the break against Switzerland holding a 4-3 lead, thanks to a hit for three in the fourth end by their female player Matsumura Chiaki.

Japan led by 6-4 as the teams played the seventh end. In that end, Switzerland’s male player Sven Michel swept his partner’s final stone all the way into position to score two and tie the game.

Japan then went onto score two more points in the eighth when Matsumura cleared out some Swiss stones. Japan recorded their first win in Geneva with an 8-6 end result.

After the game, Japan’s Matsumura Chiaki said, “Yesterday our performance was not so bad, and we discussed to make more shots. We could do it, so that was the key to our victory.”

Italy were pressed all the way by Korea in their game.

A draw in the second end by their Olympic champion Stefania Constantini was heavier than she wanted, and the Italians had to settle for two points and a 2-1 lead.

Korea took a 4-2 lead in the third end when Kim Minji played a hit to score three points.

Eventually, with the score at 6-5 to the Italians, the Koreans were left with an angled shot with the last stone of the eighth end. However, it did not work out, giving Italy a steal of one point and a 7-5 win.

After the game, Constantini said, “I think is was a rollercoaster game really. Talking for myself, I struggled a bit with the weight, I thought it was slower but actually, it wasn’t. But we really kept working and yes, we scored and then they scored and then we scored, so I think the key was to keep focussing.”

Norway led by 3-2 after five ends in their game against Denmark.

In the sixth, Norway used their power play and their female player, Maia Ramsfjell had a draw for a game-changing score of five and an 8-2 lead.

Norway then went on to win by 9-2. Afterwards Maia Ramsfjell said, “I think we’ve been learning from every game, and the experience that we’ve got from every game has been really good. We’ve set some goals for each game, and it went really well today.”

The fifth game of this session was between Sweden and Estonia.

The Estonians made the first break-through of the game when, in the fourth end, Marie Kaldvee scored four points with a tap-back to take a 5-2 lead.

Then, in the eighth end, with Estonia still leading by 8-5, Sweden’s Isabella Wranaa played a hit to score three points and take the game to an extra end. In that extra end Sweden went on to steal two points to complete a 10-8 win.