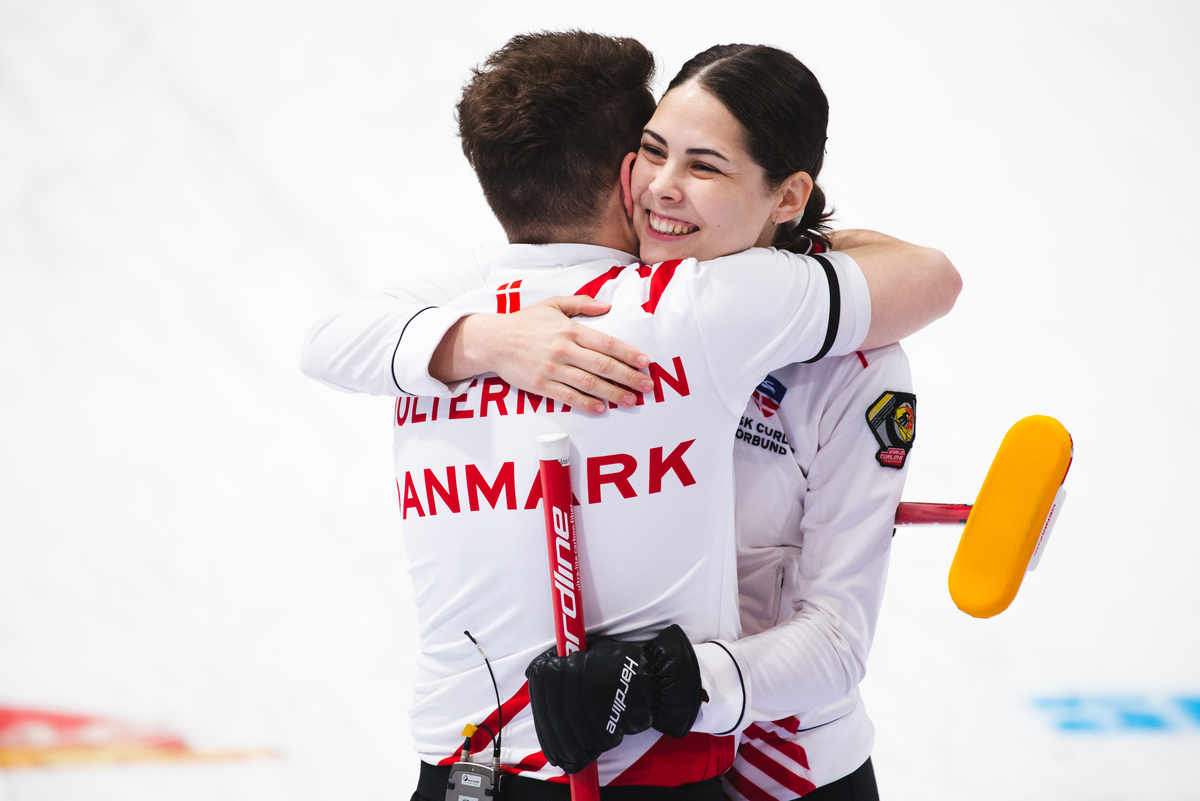 The ten teams in Group A of the World Mixed Doubles Championship played their second games in Saturday evening’s third round-robin session.

Denmark, Italy and Switzerland all had second wins to share top place on the rankings. Other session winners were Estonia and Norway.

The new, injury-enforced Italian duo of Olympic champion Stefania Constantini and Sebastiano Arman started strongly against New Zealand, scoring four with a hit-and-stay by Constantini in the first end. Then, Italy stole one point in the second for a 5-0 lead.

New Zealand’s female player Natalie Thurlow put her team on the scoreboard with a single point in the third end.

In the fourth, Constantini played a tap-back of one of her own stones, to score one more point and take a 6-1 lead into the break.

In the fifth end, Thurlow could not get inside two Italian stones, to give up a steal of two and increase Italy’s lead to 8-1. Then, in the sixth, Thurlow missed a take-out, Italy stole two more points for 10-1, and New Zealand conceded.

In their game against Sweden, Switzerland started strongly, opening with a hit for three points in the first end by Alina Paetz.

With the score at 4-2 when the teams played the fourth end, Switzerland’s Paetz produced a nose-hit to score two more points and take a 6-2 lead into the break.

Sweden’s Isabella Wranaa responded with her own nose-hit for two in the sixth end, to reduce the Swiss lead to 8-4. However, another hit by Paetz in the seventh gave Switzerland one more point and a 9-4 win.

Denmark faced Korea in this session, with both teams having won their openers. The teams were tied at 1-1 after the first two ends, but then steals of two points in each of the third and fourth ends gave Denmark a 5-1 lead.

Korea opened the second half of the game strongly, scoring three in the fifth end to reduce Denmark’s lead to 5-4.

But, in the sixth, the Danes used their power play to score two more for a 7-4 lead.

In the seventh end, Korea’s Kim Minji scored one point with a hit, to reduce the Danish lead again, this time to 7-5. However, the Koreans eventually ran out of stones in the eighth end, to give Denmark their second win.

Afterwards, Denmark’s Henrik Holtermann said, “You could say it’s a good day. This is our first world championship, so to start like this is fantastic. The ice is tricky, so we just need to see what we can do well about reading the ice. And so far, it’s worked out.”

He continued, “We had some good ends just before the break and that helped us to control the game. We love being here.”

His partner, Jasmin Lander was quick to praise his performance, saying, “It was all about being first to learn the ice, and Henrik made a lot of key shots in this game.”

Norway faced Finland in this session. In the fourth end, Norway’s Maia Ramsfjell played a take-out on a Finnish stone to score two points and reduce Finland’s lead to 4-3.

By the time the game reached the eighth end, Norway were leading by 7-4. In the eighth end, Finland’s triple take-out attempt didn’t work out, resulting in a steal of one for Norway and an 8-4 victory for them.

In the fifth game of the session, Estonia faced Japan. The Japanese led by 4-3 when the teams went into the break.

In the fifth end, Japan’s Matsumura Chiaki played an in-off to score two points and increase her team’s lead to 6-3.

After this, Estonia brought themselves right back into the game with a hit for five on a power play in the sixth end, to take the lead at 8-6.

In the seventh end, Japan had a compete miss on a take-out attempt to give Estonia a single steal and a 9-6 lead. Japan could only score one point in the eighth, to give Estonia their first win so far, by 9-7.

After the game Estonia’s Harri Lill spoke about the game-turning sixth end, saying, “I guess the power play was definitely important. We were down in the game, so it was a crucial end. We went to get two but scored five, so can’t complain. And it turned the game of course.”