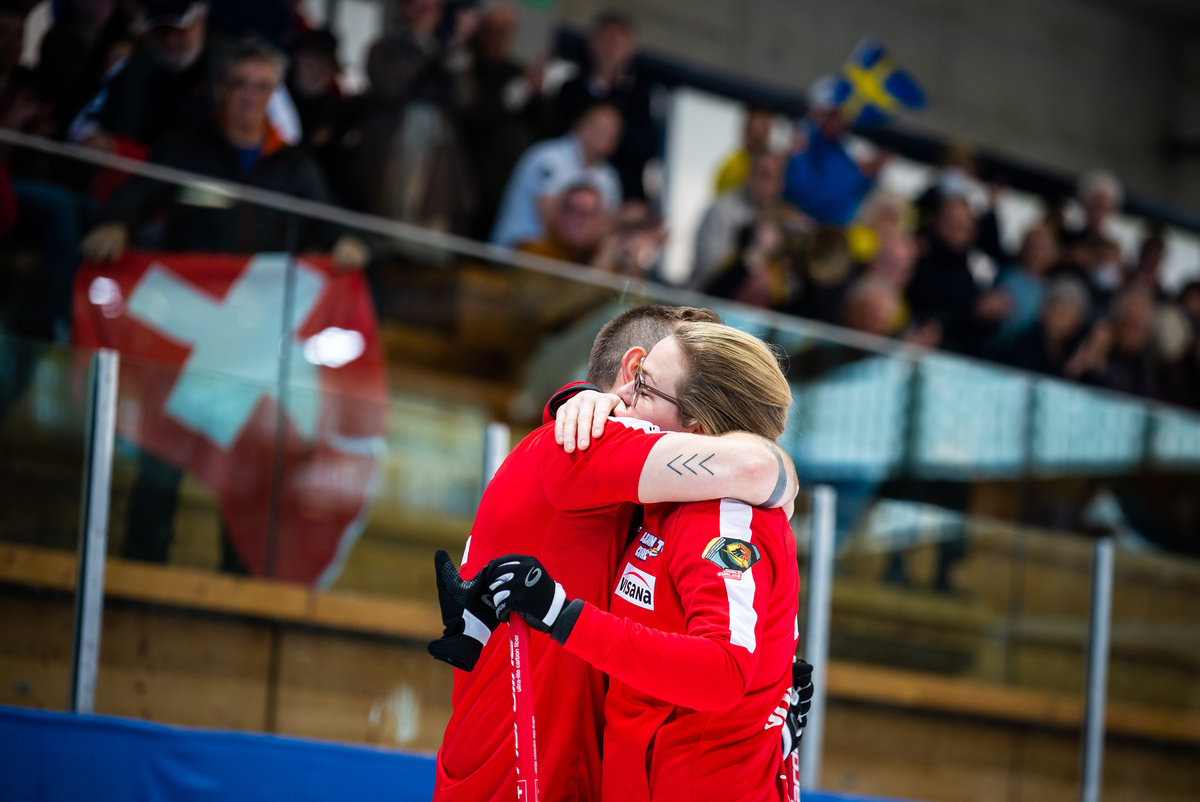 The ten teams in Group A played their last round-robin session on Thursday afternoon and it was only when the last stone came to rest that the final rankings became clear.

In the five games played, Switzerland beat Korea by 9-2; Denmark were 6-2 winners over Estonia; Norway defeated New Zealand by 9-1; Sweden were 8-5 winners over Japan; and Italy beat Finland by 10-3.

In their game against Korea, Switzerland set the tone from the first end when their female player Alina Paetz played to score three points.

In the second end, Korea’s Kim Minji was too strong with her hit attempt and her shooter rolled out, to give up a steal of two points for 5-0 lead for Switzerland.

The Swiss went into the break holding a 7-2 lead, thanks to another steal of two in the third end.

After the break, Switzerland scored one in the fifth, and stole one in the sixth to complete their 9-2 victory.

This result means that Switzerland ended up in joint top spot on the rankings and, with the best Draw Shot Challenge result of the teams involved, they ranked first. It means that they take the direct route to Friday evening’s semi-finals.

Afterwards, a pleased Alina Paetz said, “It feels really good, I think we just played our best game of the week, so that was a good win and we’re happy. We’re also happy about qualifying direct — happy feelings, happy faces right now.”

When Sweden faced Japan in this session, both teams knew that only a win would be enough for play-off qualification.

In the fifth end, Japan’s Matsumura Chiaki played a double take-out to score two points and reduce the Swedish lead to 5-3.

After this, Sweden scored two with a power play in the sixth end for a 7-3 lead.

Eventually, Sweden scored one more point in the eighth end without having to play their last stone, to finish off the 8-5 win. This Swedish victory along with their Draw Shot Challenge result, places them second on the rankings.

They now go on to Friday’s qualification games and will face whichever team finishes third in Group B. Meanwhile, Japan ranked fifth overall.

After the game, Isabella Wranaa said, “We knew we had to win that game to go to the play-offs, so we just went out there and gave it everything we’ve got.”

And looking forward, her brother, Rasmus, said, “We’ll just try to keep the flow we’ve got now.  We’ll keep making shots and see how it goes with that.”

Norway faced New Zealand and dominated from the start.

They opened with one point in the first end when Maia Ramsfjell tapped up one of her own stones.

Norway then added a steal of three in the second when New Zealand’s Natalie Thurlow came up short with her final draw. Further steals in the next three ends meant that Norway held a 9-0 lead after five ends.

When Thurlow drew her final stone of the sixth end into position to score one, the New Zealanders conceded.

This result, and their Draw Shot Challenge numbers, places Norway in third place among the three tied teams at the top of the group table.

It means that they will face Canada, who will finish second in Group B, in Friday’s qualification games.

New Zealand, without a win, finished tenth in the group and will now be relegated to next season’s World Qualification Event.

Later, a pleased Maia Ramsfjell said, “That was a really good game for me and Magnus. We keep playing better and better in every game. Obviously, our goal was to reach the play-offs and that’s what we’ve done now, so we’re happy.”

Italy faced Finland in this session, and the Italians took a 5-1 lead into the break.

In the fifth end, Finland’s Markus Sipilae played a hit to score two points and reduce the Italian lead to 5-3.

However, in the next end, Italy’s Stefania Constantini drew her final stone into position to score four points and take the Italian lead to 9-3.

Italy went on to steal one more point for a 10-3 win that places them in fourth position on the table.

Finland ranked ninth, to face a relegation game against the eventual eighth-placed team from Group B, with the winner staying in the World Championship line-up and the loser going to the World Qualification Event.

In the fifth game of the session Denmark played Estonia.

The game was level at 1-1 after two ends.

In the third, Denmark’s Jasmin Lander had a chance for a multiple score, but her draw was heavy, and the Danes had to settle for just one point for a 2-1 lead.

In the sixth end, with Denmark leading by 5-1, it was Estonia’s Marie Kaldvee’s turn to be heavy on a draw, to only score one and reduce Denmark’s lead to 5-2.

Denmark went on to win by 6-2 to rank sixth overall. Estonia finished in seventh place, both safely qualified for next season’s World Championship.