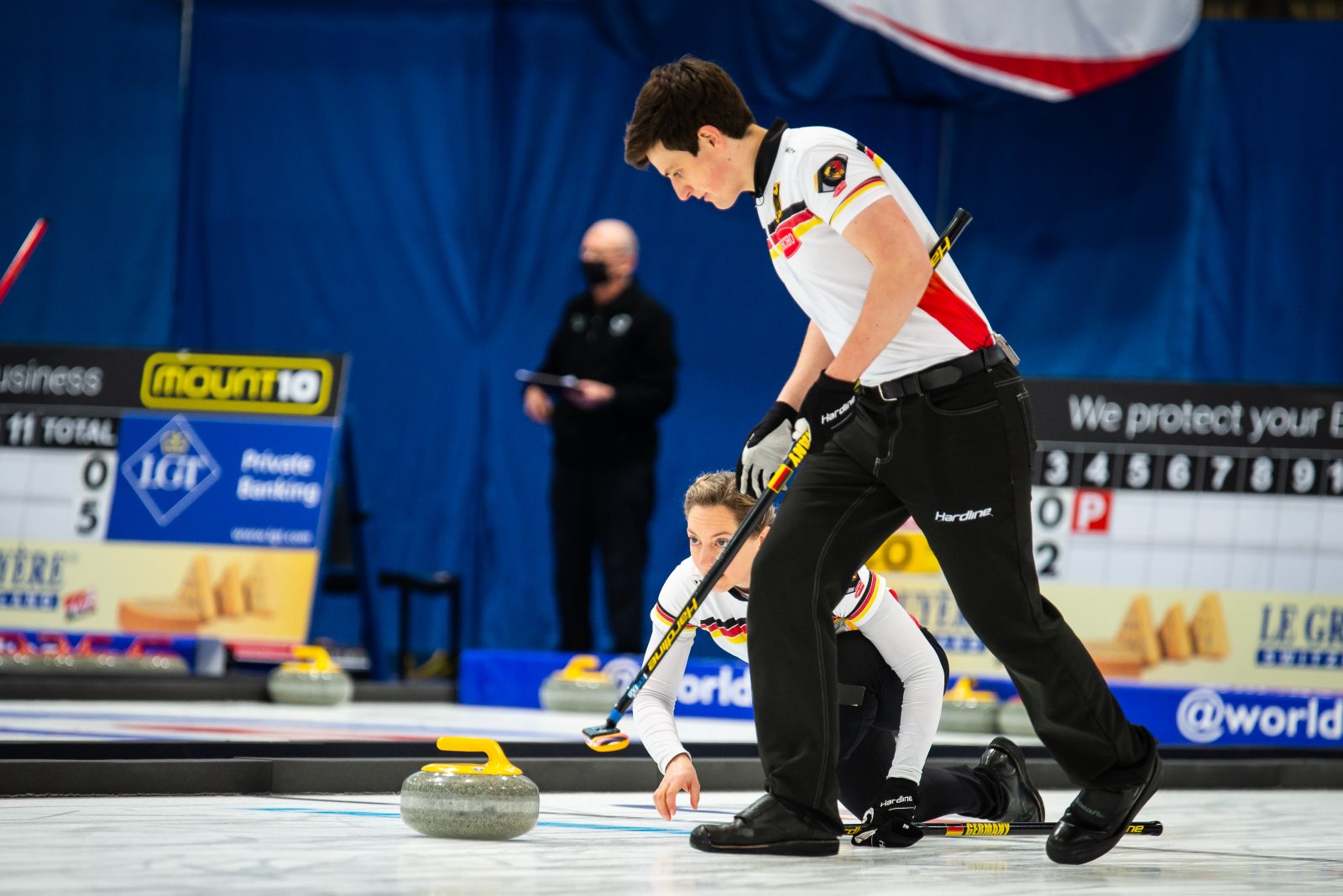 Scotland’s commanding 10-2 win over Turkey in Thursday morning’s second-last Group B round-robin session not only kept their unbeaten record intact, it also guaranteed them top place on the group table and the direct route to the semi-finals.

In other games, United States beat Hungary by 8-2; Germany were 13-2 winners over Czech Republic; already-qualified Canada defeated Australia by 10-2; and England had an 11-1 victory over Spain.

With Scotland and Canada already qualified, the spotlight was on United States and Germany in this session as they were locked in third place together, with only one more qualifying slot available.

United States faced Hungary, and they opened well when Becca Hamilton played a hit to score two points in the first end.

The Americans then stole two in the second end and one in the third for an early 5-0 lead.

Hungary responded with one point in the fourth end. The Americans came out after the break to score three points for an 8-1 lead when Becca Hamilton successfully played a run-back on one of her own stones.

Hungary then called their power play in the sixth end and, when they could only score one, they conceded the game, with United States winning by 8-2.

Having lost their previous three games, afterwards, Matt Hamilton simply said, “It’s good to get back on to the winning track.”

The Americans face Canada in their last round-robin game later as their battle for a qualification place continues.

Germany are the other team fighting for the third qualifying slot, and they faced Czech Republic in this session.

This game was level at 1-1 after two ends. In the third end, Germany’s Pia-Lisa Scholl brought her last stone through a collection of stones to hit out her Czech target and score a game-changing five points.

Germany then had a single steal in the fourth end to go into the break leading by 7-1.

After the Czechs put one point on the scoreboard in the fifth, Scholl had a draw in the sixth end to score a maximum six points and win the game by 13-2.

After the game, Klaudius Harsch said, “We just controlled the ice better than in any other game this week. We controlled the game from the third end on, the third was the key end in the game.”

His teammate, Pia-Lisa Scholl agreed, “That was an important game for us and we’re just happy that it worked out.”

Like the Americans, the German team know that a win in the final round-robin session is vital.

Harsch said, “We’re playing England now. We’ve never played them before, so we just need to come out and play like we did this morning, then we’ve got a good chance.”

The Scots opened with a score of two in the first end against Turkey.

For this game, Turkey had reverted to their original line-up of having Muhammed Ucan throw first and last stones. In the second end, Ucan’s draw was wide, and Scotland stole two points for a 4-0 lead.

After this, Scotland had steals in the third and fourth end, to take a 9-0 lead into the break.

The Scots had a single steal in the fifth end. Turkey then scored two in the sixth, only to concede, with a final score of 10-2 to Scotland. This was the Scots’ eighth successive win.

Canada, already qualified for the play-offs, had a straightforward task in their game against Australia.

In the first end, their female player Jocelyn Peterman played a tap-up to open the scoring with two points.

Canada then scored threes in each of the third and fifth ends for a 10-1 lead.

Then, when Australia’s Tahli Gill could only score one point in the sixth end when her draw attempt was wide, the Australians conceded with a final score of 10-2.

The fifth game of this session saw England face Spain.

In the fourth end, with England leading by 5-0, Spain’s Oihane Otaegi played a hit on an English stone to leave another of her own stones counting one, to reduce the English lead to 5-1.

In the fifth end, England’s Anna Fowler also played a hit, and she scored five points for a 10-1 lead.  England went on to win by 11-1 in six ends.

After this session, Turkey, at the foot of the table, look destined to be relegated, while above them two of Australia, Czech Republic, England, Hungary and Spain could end up in the relegation play-off.