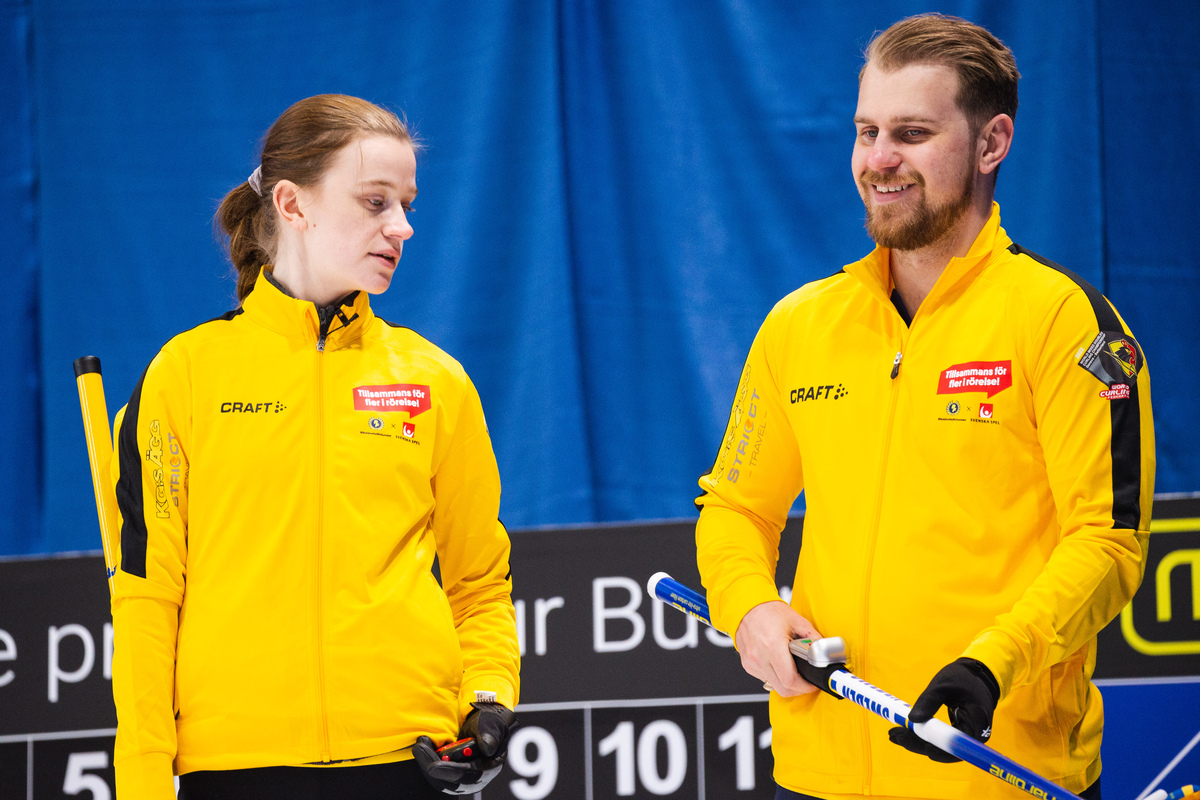 After the Group A teams played their second last round-robin games, it was still too close to know which three teams will qualify for the play-offs.

Among the five teams still in contention, Japan beat Finland by 11-3; Norway defeated Italy by 9-3; Sweden were 8-3 winners over Denmark; and Switzerland topped New Zealand, 11-3. In the fifth game of the session, Estonia beat Korea, 8-3, but these two teams are now out of the qualification picture.

In their game against Japan, Finland opened with a single point, but after this, Japan scored two points in the second end to take a lead they were not to give up. They stole two more in the third for a 4-1 lead. Then, in the fifth end, their female player Matsumura Chiaki played a contender for shot of the week, a triple take-out that left five of her own in the house. This gave Japan a 9-2 lead on way to a 11-3 final score.

Afterwards, Japan’s male player Tanida Yasumasa said, “We feel so happy about that win, and a bit tired, but we have good energy.”

Speaking about the score of five, he had just three words for his partner, “She is amazing!” And looking forward to their vital last game against Sweden, he added, “Tomorrow, I think we need to just enjoy curling.”

Italy had been the early leaders in this group, but had lost their previous two games when they faced Norway in this session.

Norway led 3-1 at the break, but in the fifth end, their female player Maia Ramsfjell had a draw to score a maximum six points and take a 9-1 lead. After this, Italy’s Stefania Constantini had a draw for two in the sixth end to reduce Norway’s lead to 9-3, but conceded the game regardless. This was a fourth successive win for the Norwegians but by contrast, a third successive loss for Italy, including the second time in a row that they have given up a six-ender.

The Italians now sit in fifth place on the table and simply must win their last game against Finland as well as have other results go their way if they are to qualify. Norway, in joint top spot, face New Zealand in their last round-robin game.

In the first end Swiss female player Alina Paetz had a tap-out to score four points, and they never looked back after that. With the score at 9-1 at the break, New Zealand scored two in the fifth end. However, Switzerland went on to win by 11-3 in just six ends.

Speaking afterwards, Switzerland’s Sven Michel said, “It was a great feeling from the first stone — a great crowd also, and good weather, which made it just perfect.”

Switzerland are among the joint leaders, and they face Korea in their last round-robin game. Looking forward to that, Alina Paetz said, “We expect a tough game tomorrow, we know both players, we know they can play really well, so we know that means we need to play a little better than them.  We’re looking forward to it.”

Sweden were one-up against Denmark when, in the second end, Denmark’s Jasmin Lander scored two points with an angle raise that moved many stones. By the seventh end, Sweden led by 6-3, when Isabella Wranaa played a hit, to score two more points and win the game, 8-3. This keeps the Swedes in joint top position, and they face Japan in their final round-robin showdown.

Estonia played Korea in this session, with neither team able to qualify. In the fifth end, with Estonia already leading by 4-2, their female player Marie Kaldvee drew her last stone into position to score three more points, on the way to an 8-3 win.