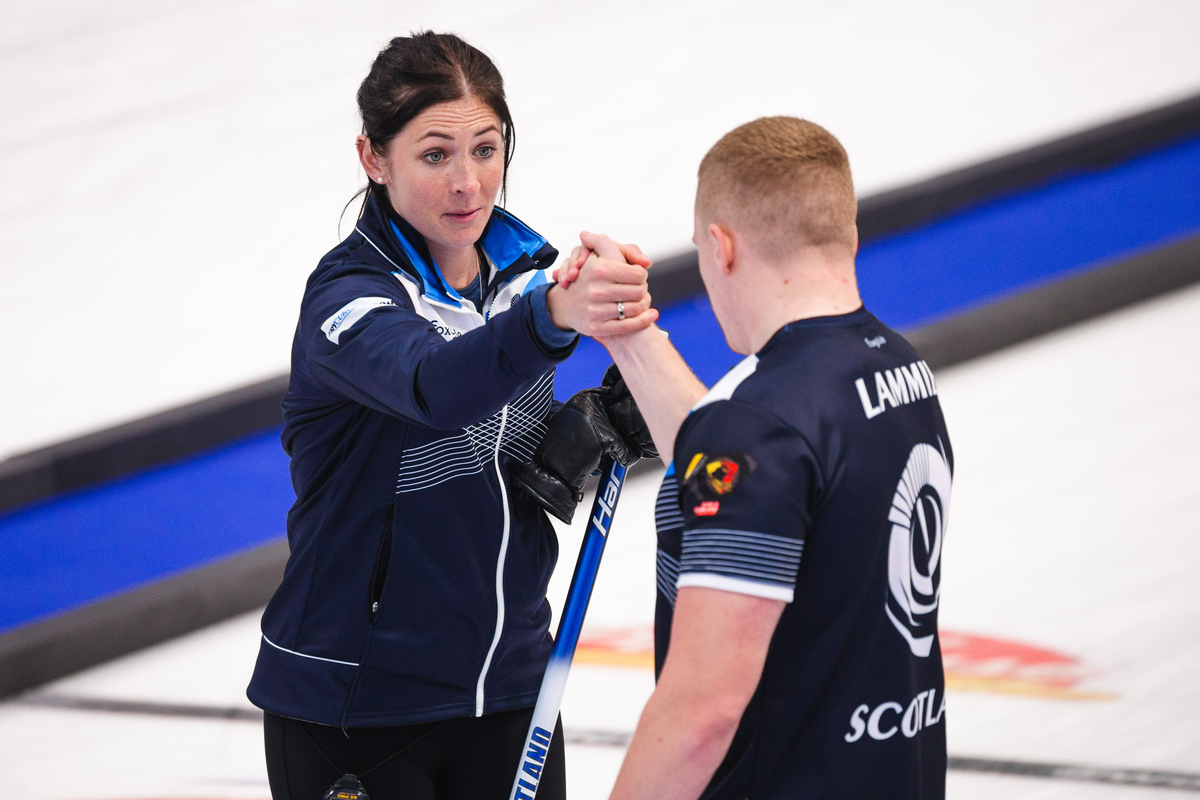 Scotland beat Hungary by 10-4 in Wednesday afternoon’s 14th round-robin session, to maintain the outright lead in Group B and become the first team to qualify for the championship’s play-off stage.

In the other games, Canada beat England by 6-2 to stay in second place on the table and join Scotland in qualification; Australia were 12-5 winners over United States — a third successive loss for the Americans; Germany beat Turkey by 10-2; while Spain won over Czech Republic by 7-2 to notch up their second win.

In their game against Hungary, Scotland opened with a score of three when Eve Muirhead played a tap-up.

The Scots held a 5-3 lead at the break and in the fifth, a draw by Muirhead produced a score of five for Scotland and a 10-3 lead.

Hungary scored one in the sixth end and then conceded, giving Scotland the 10-4 win that qualified them for the play-offs with two round-robin games to play.

Afterwards, Muirhead said, “We managed the ice very well, slightly better than them. We got our stones in good spots and whenever they made a mistake, we capitalised on it and put them under a lot of pressure.”

Speaking about qualifying, she added, “Our first goal was to qualify for the play-offs, so to have secured that with a couple of games to go feels nice. We want to keep the momentum going though, because it’s coming to the crucial part of the week and that’s when you want to step it up a little bit.  We just want to keep doing what we’re doing, we’re managing things well, we’re playing key shots when it matters, and we’re just enjoying it.”

Canada beat England by 6-2 to stay in second place behind the Scots, and qualify behind them.

In this game, England had last stone in the first end, but Anna Fowler’s last shot went wrong to let Canada open with a steal of two.

In the third end, Canada’s Jocelyn Peterman was facing two English counters, but she played a draw inside them both to score one and take her team’s lead to 3-1.

The Canadians had a 4-1 lead at the break. In the fifth end, when Anna Fowler’s last draw came up short, Canada gained a single steal.

In the seventh end, England’s Anna Fowler scored one point with a hit to reduce Canada’s lead to 6-2, and that was the final score.

Afterwards, Canada’s Brett Gallant said, “We had good control of draw weight and Jocelyn got her first ones in some great spots. We’re getting more comfortable with the ice conditions with every draw, and we’re getting more precise with our shots.”

Australia played United States in this session. In the fourth end, despite crashing their last stone, the Americans scored two points to tie the game at 4-4.

Australia put four points on the board in the fifth, with a hit-and-stay by Tahli Gill, to take an 8-4 lead.

Then, in the seventh, Gill played a double take-out to score four again and increase Australia’s lead to 12-5.

The Americans then conceded what was their third successive loss.

After this win, Tahli Gill said, “We felt really good in that game. Every win from now on is going to be crucial. We have to win the rest of our games to maybe have a chance. We’re just going to go out there and try to keep the momentum going.”

Her partner, Dean Hewitt, added, “We’re just going to have to take it one game at a time. The ice is getting better and better and we’re really looking forward to having that great ice for the rest of our games. We need to keep the intensity up. We’re still learning and we’re just excited to be out there in every game.”

Germany held a 5-0 lead against Turkey after two ends of play.

Then, in the third end, Turkey’s female player Dilsat Yildiz played a draw to score two points and reduce the German lead to 5-2.

In the fifth end, Yildiz was heavy with a draw against three German stones and gave up a steal of three to increase Germany’s lead to 9-2.

The Germans went on to win by 10-2 to keep their qualification hopes alive, as they share third place with United States.

After the game, Germany’s Pia-Lisa Schoell said, “We had a good start from the first end. We’re pleased with that win, and we’re going step-by-step, game-by-game. Now the job for today is done — next job, tomorrow.”

In the fifth game of the session, Czech Republic faced Spain.

Thanks to steals in the third and fourth ends, Spain took a 4-1 lead into the break.

Then, in the sixth end, Czech’s Julie Zelingrova was light with her draw, to give up another steal of two and increase the Spanish lead to 7-1.

Spain went on to win by 7-2, their second victory of the event so far.