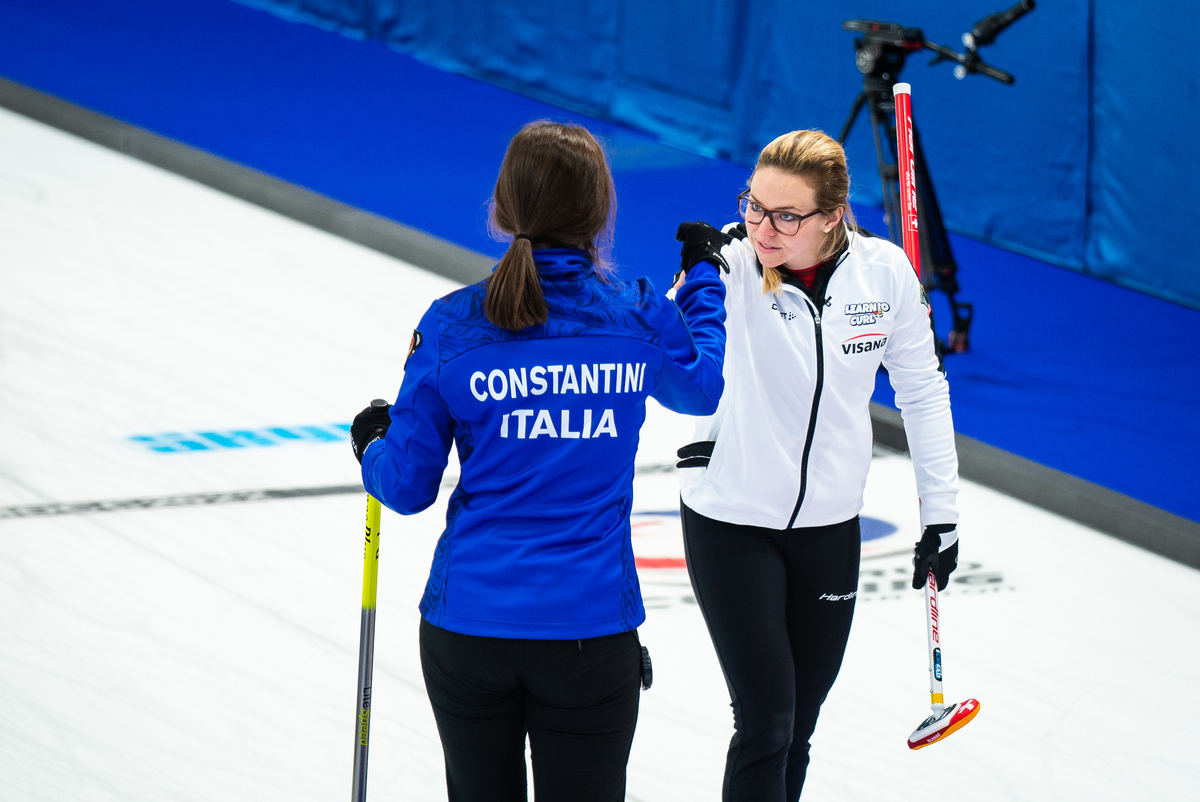 In the opening end of Wednesday morning’s round-robin game between Italy and Switzerland, Alina Paetz played a double tap-up, knocking out the only Italian stone in the house, to open the scoring with a maximum six points. Try as they did, Italy could not recover from this blow and Switzerland went on to win by 11-7.

Elsewhere in this session, Norway had a 12-1 win over Estonia; Japan beat Denmark by 6-5; Sweden defeated New Zealand by 12-2 in six ends, while Korea won over Finland by 9-5.

These results mean that five teams — Italy, Japan, Norway, Sweden and Switzerland — now share the lead in Group A, with two round-robin sessions left, and only three qualification places available.

After giving up the opening six, Italy fought back against the Swiss. In the second end, although Stefania Constantini was light with her final draw, the Italians bounced back with a score of three.

However, three points by Switzerland in the third end increased their lead to 9-3 and kept the pressure on Italy.

Italy scored two with power play in the sixth and then stole one in the seventh when a double take-out attempt by Paetz could not completely remove the second Italian counter.

This meant that Switzerland went into the eighth end with a 10-7 lead. They then scored one more point to win by 11-7. Both of these teams are now in the five-way tie for top spot.

Afterwards, Switzerland’s Paetz said, “That was a big game for us. They’ve played well all week and we’ve struggled a bit. We had a good start — obviously six helps in the first end.”

Her partner, Sven Michel, spoke about the maximum score in the first end, saying, “It didn’t look like a six, but the angles were all in our favour and Alina made a perfect shot with her last and that gave us the chance.”

In the game between Norway and Estonia, the Norwegians had a chance to open the scoring with five points in the first end.

However, the draw by Maia Ramsfjell came up short, and they had to settle for four.

Estonia had a complete miss in the second end to give Norway a steal of two and a 6-0 lead.

Then, after Estonia got on the scoreboard with one point in the third end, Norway scored another four in the fourth with a tap-out of an Estonian stone.

Norway were leading by 10-1 going into the break. They scored one point in each of the fifth and sixth ends, to win by 12-1.

Denmark opened their game against Japan with a score of three in the first end. It would have been four points, but Jasmin Lander could not keep her shooter in play.

The Danes took a 4-2 lead into the break. In the fifth end, Japan’s Matsumura Chiaki promoted one of her own stones to take out a Danish stone and score two points. This levelled the game at 4-4.

The game was tied again at 5-5 after seven ends, but in the eighth, Japan scored the one point needed for their 6-5 win without having to play their last stone.

Japan have now won five successive games and are among the group leaders.

Speaking later, Japan’s Tanida Yasumasa said, “We are very happy, but that was a very scary game.  The ice conditions were difficult for us, but we keep on going upwards. And yes, we can keep it going.”

Sweden faced New Zealand in this session and opened with a score of one in the first end when Isabella Wranaa played a hit on a New Zealand stone.

It was virtually one-way traffic in this game, except in the fifth end when Natalie Thurlow drew for two points to reduce Sweden’s lead to 9-2.

Three more points for Sweden in the sixth end finished off the game, at 12-2.

The Swedes now join the group of five sharing the lead, while New Zealand are still looking for their first win.

Afterwards, Isabella Wranaa said, “We found draw weight pretty early in the game, so that was a big advantage for us. The ice was good, and we liked it.”

Her partner and brother, Olympic champion Rasmus, added, “I’m taking this very seriously, but it’s fun as a change from normal curling. You get a lot of interesting situations in the house with mixed doubles, so it’s fun to think about all the angles in every end.”

Asked about the experience of playing with a sibling, Isabella said, “It’s really nice to play with Rasmus. We’re really good friends as brother and sister and we get along really well. We don’t disagree on the ice too often!” Her brother Rasmus quietly agreed.

The fifth game of this session saw Korea face Finland. The Finns started strongly to lead by 4-0 after two ends.

However, in the third end, Korea’s Kim Minji played an angle raise on her own stone to tap out a Finnish stone and score three. By the sixth end, Korea led by 6-4 when Finland’s Markus Sipilae played a draw for one point to reduce Korea’s lead to 6-5.