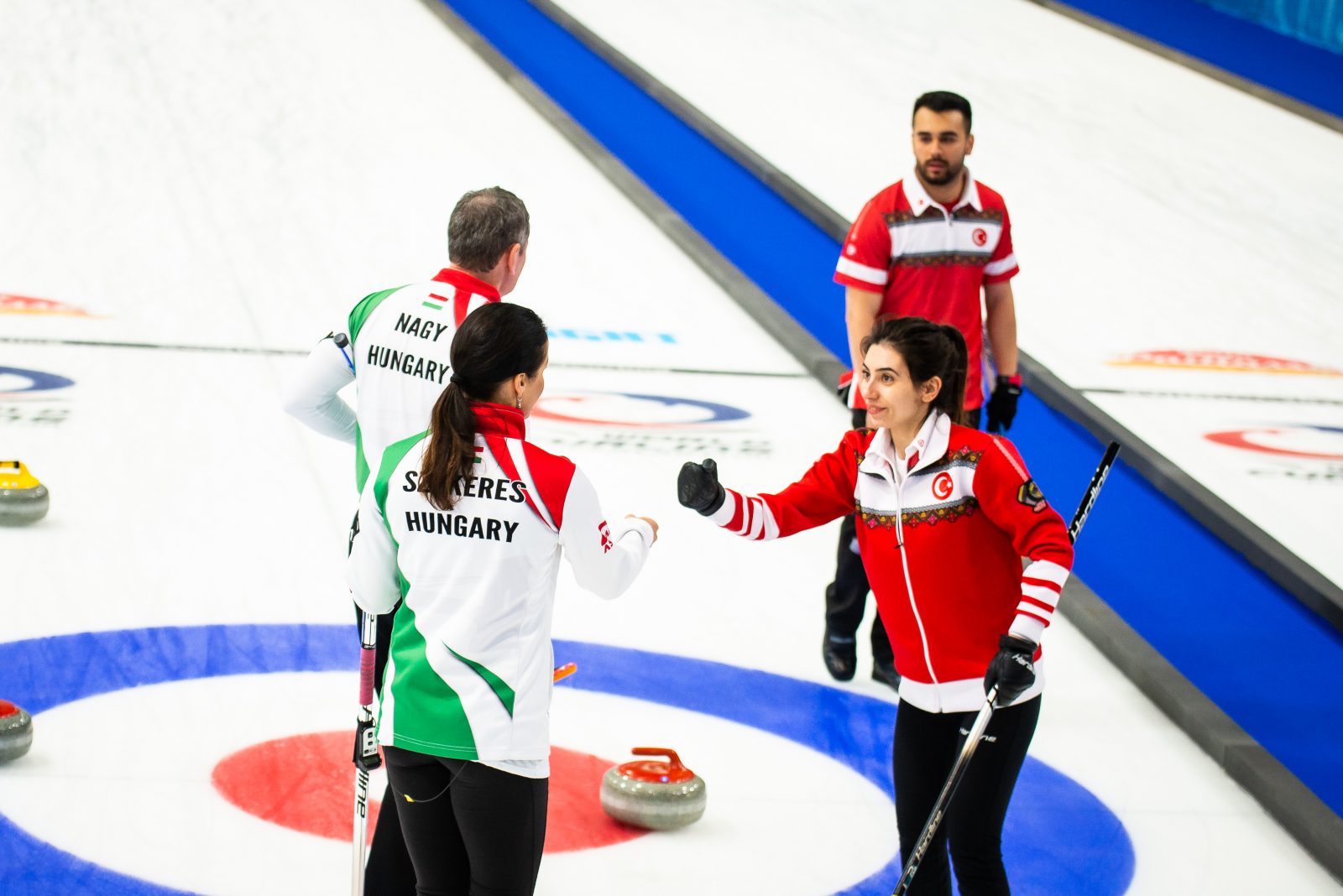 Turkey beat Hungary by 6-3 in Tuesday evening’s twelfth round-robin session to record their first win of the World Mixed Doubles Championship so far.

In the other games in this session, Scotland beat United States by 7-2 to keep their unbeaten record intact and top the group rankings; Canada had a 10-4 win over Czech Republic, to move into a clear second place; Germany beat Spain by 7-5; and Australia defeated England by 8-5.

Turkey opened the scoring against Hungary with a single point in the first end, but Hungary then scored one in the second when they touched up a collection of stones.

Hungary then stole a single point in the third to take a 2-1 lead.

Another single point by Turkey in the fourth meant that the teams went into the break level, at 2-2.

In the fifth end, a hit attempt by Hungary’s Ildiko Szekeres went wrong to give Turkey a steal of two and a 4-2 lead.

The Turks then stole two more in the sixth when Hungary’s draw was short.

Hungary could only score one more in the seventh end, giving Turkey their first win, by 6-3.

Afterwards, Turkish female player Dilsat Yildiz said, “We’ve got our first win in the tournament, so we’re happy. We’ve prepared well for this event, and we know we always have strong opponents at this level. Also, sometimes we’ve not been lucky so far. The difference this time was to have patience and full concentration.”

The Scots came onto the ice against United States as the only unbeaten team left in the Championship. After the teams swapped singles in the first two ends, Scotland’s Eve Muirhead scored two points with a draw in the third, to take a 3-1 lead.

The Scots then had two-point steals in the next two ends to lead by 7-1 after five ends.

The Americans could only add one more point in the sixth and Scotland went on to win by 7-2.

This keeps them unbeaten at the top of the group, on six wins, while the Americans slip to third place.

Afterwards, Muirhead said, “The ice has been a little frustrating in the last couple of draws, but I think both of us managed it pretty well — that’s one thing we’ve been doing, and just taking each game with what’s in front of you. I think that was a pretty solid performance and it was a crucial win in terms of ranking and getting that number one spot.”

Her partner, Bobby Lammie added, “We’re just feeling pretty confident with where we’re putting the stones. It’s been quite good in most ends and that’s been the difference.”

Canada faced Czech Republic in this session and had built a 6-0 lead after three ends.

However, in the fourth, Czech female player, Julie Zelingrova, played an open draw to score three points and half the Canadian lead, to 6-3.

In the seventh end, with Canada now leading by 7-4, their female player Jocelyn Peterman played a draw to score three points, and win the game, with a final score of 10-4.

This victory now puts Canada into a clear second place on the rankings.

Afterwards, Canada’s male player, Brett Gallant, said, “We feel pretty good. I think our performance was pretty sharp. We set up some good angles, especially early on in both of our games today. That helped us get a bit of a lead and, when you get a lead in this game, it’s always to your benefit.  Jocelyn set it up pretty good all day, and if we can continue to do that, then we’re in a good spot.”

Australia found themselves down by 1-5 after the first three ends of their game against England.

However, they then put points on the boards in each of the next five ends, scoring two in the fourth, stealing ones in both the fifth and sixth ends, then stealing two in the seventh and finishing off with a steal of one in the eighth end. This 8-5 victory is their second win of the day and the event.

In the fifth game of the session, Spain faced Germany. The Spanish started the game well when, in the first end, their female player Oihane Otaegi opened the scoring with a nose-hit for two.

In the third end, with Spain leading by 2-1, Otaegi’s attempted take-out went wrong, and the Spaniards gave up a steal of three, to hand Germany a 4-2 lead.

Spain never recovered from that, and Germany went on to win by 7-5.

These results mean that Germany join Czech Republic and Hungary in joint fourth place, on three wins and three losses.