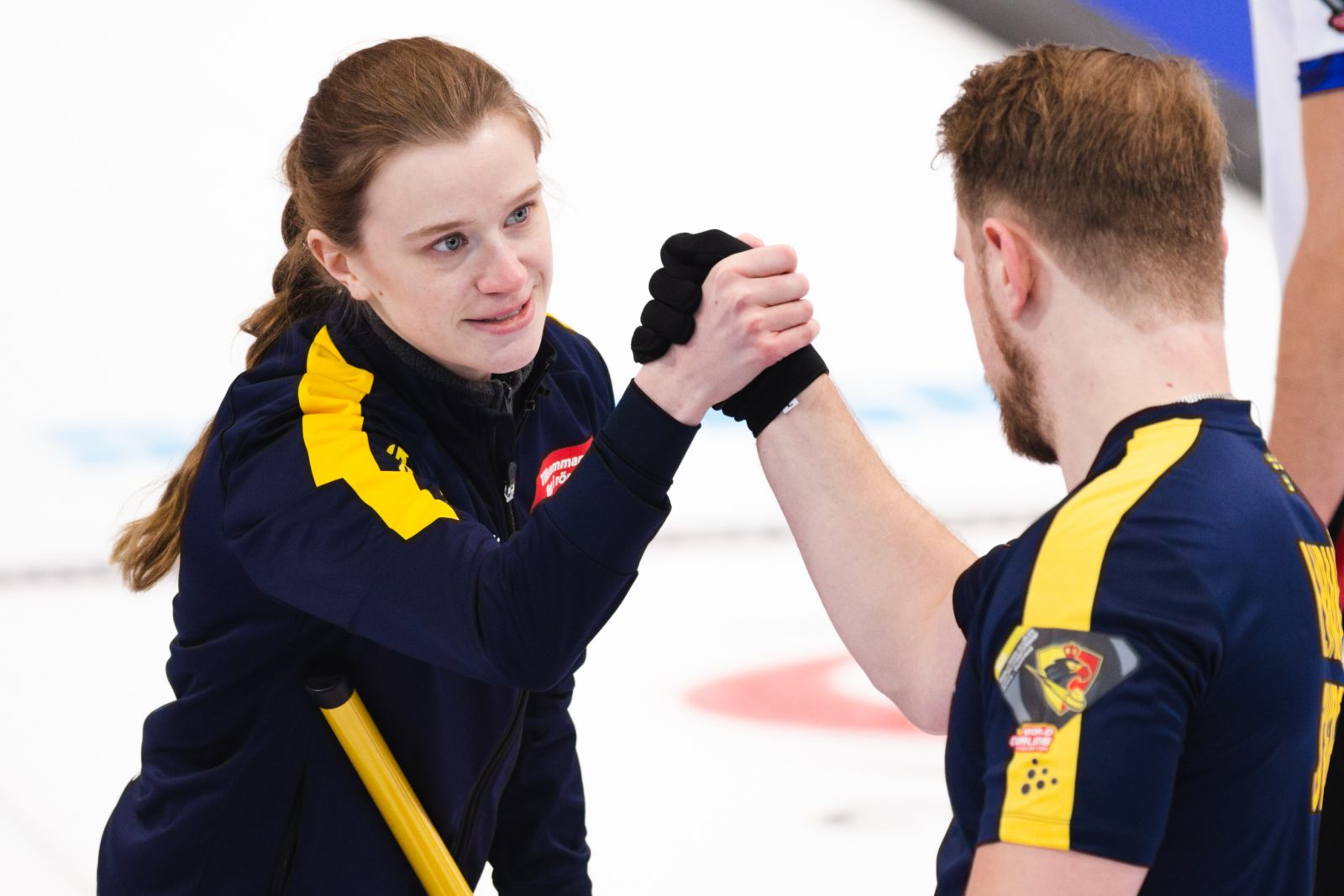 In the other games of this session, Norway beat Switzerland by 9-3; Japan were 11-3 winners over Korea; Denmark beat New Zealand by 9-5; and Finland won over Estonia by 9-4.

In the game between Italy and Sweden, the score was 2-2 when, in the third end, Italy’s Stefania Constantini promoted one of her own stones onto the button, to score one point.

However, in the fourth end, Sweden’s Isabella Wranaa played a nose-hit for two points that gave her team a 4-3 lead.

Sweden followed that up with a single steal in the fifth end for 5-3.

Eventually, in the eighth end, Sweden’s Rasmus Wranaa played a heavy clear-out to put the game beyond Italy, and the Swedes won by 7-4.

After the game, Isabella Wranaa said, “We thought that we needed to win this game to have a good chance to qualify. We knew we had to play our best and concentrate on one shot at a time.  Obviously, they haven’t lost in a long time now, so we know they are really good. We wanted to start good and just keep on with every shot in the whole game.”

Switzerland were in second place when they came onto the ice to face Norway. This was a key game as both teams started looking towards play-off slots.

By the sixth end, Norway had carved out a 5-3 lead and, in the sixth, Norway’s Maia Ramsfjell played a draw to score four points and increase their lead to 9-3.

Switzerland conceded defeat halfway through the next end. This win for Norway means that both of these teams are now in the four-team group sharing second place on the rankings.

Afterwards, Norway’s Magnus Ramsfjell said, “They are a really good team, and we knew we had to play our best. So, we continued working on the goals that we set early in the tournament and clearly, it worked.”

His sister, Maia, added, “We’ve been struggling with the ice previously, but as the games have progressed, we’ve got to know it a lot better. This game was a lot straighter than in previous games, so we struggled to get around guards and play taps, but overall, I think we managed it after the first few ends, which was good.”

Japan opened the scoring in the first end when Matsumura Chiaki had a draw into the house to score three points. Japan led by 4-0 in the third end when Korea’s Kim Minji was looking to get back into the game with a big score. However, she could only score two points with a hit attempt, as Japan led by 4-2.

The Japanese went on to win by 11-3 and now join the group of four teams sitting in joint second place.

After this win, Tanida Yasumasa said, “We had a very good start in this game. We prepared that last night and focussed on how the first end is very important. We tried to control draw weight.”

Denmark faced New Zealand and, in the fifth end, with the Danes leading by 5-4, their female player, Jasmin Lander played a hit into a busy house, to score three points.

This moved the Danish onto an 8-4 lead.

Then, in the sixth end, New Zealand’s Natalie Thurlow played a hit-and-roll to score one and reduce the Danish lead to 8-5.

Denmark went on to win by 9-5, a third victory so far that keeps their play-off hopes alive.

New Zealand are still without a win in the event.

In the fifth game of this session, Estonia were playing against Finland.

In the fifth end, with the Finns ahead by 5-1, Estonia’s Marie Kaldvee played a draw to score three points and reduce the Finnish lead to 5-4.

However, Finland responded in the next end, when Markus Sipilae also scored three points with a draw for an 8-4 lead.

Finland went on to win by 9-4, their second win of the event so far.

Estonia — as well as Korea — now sit on two wins and four losses.