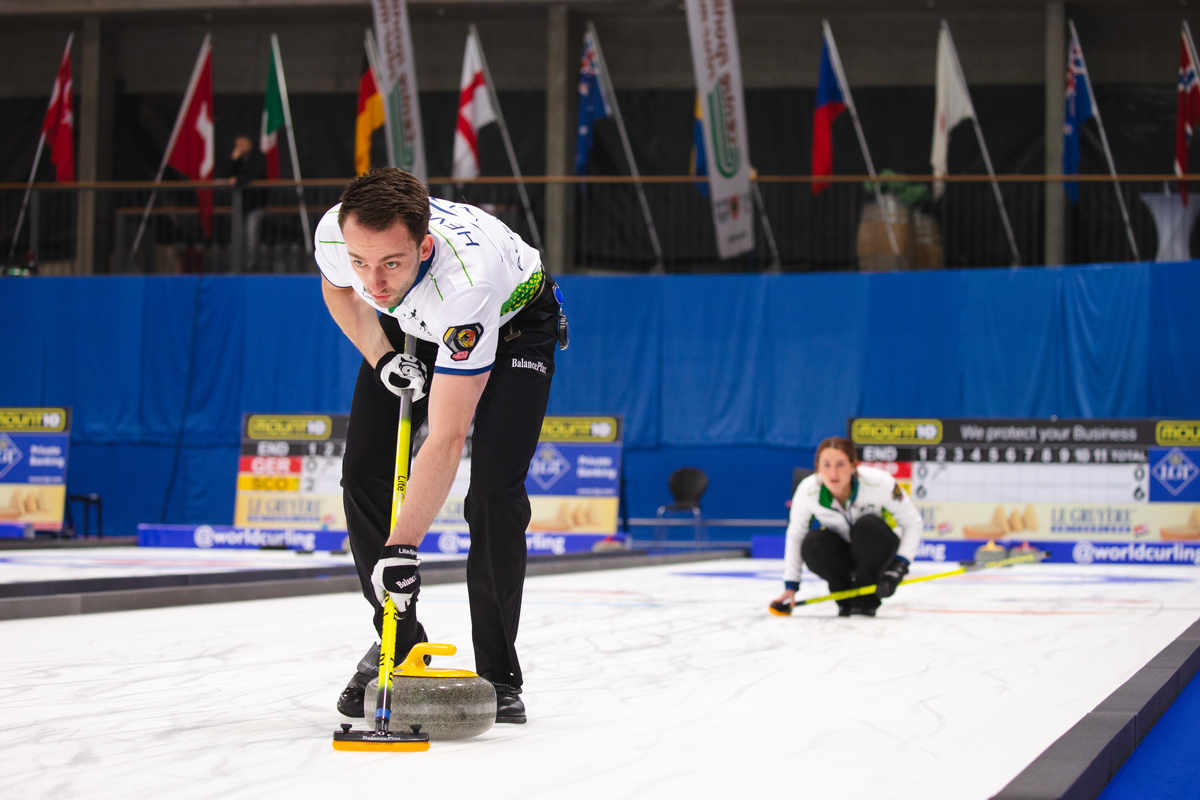 Having lost their first four games in Group B, Australia finally notched up a win when they faced Spain in Tuesday morning’s tenth round-robin session.

And they did it in style when, with the last stone of the first end, Australian female player Tahli Gill rolled in her final draw to score a maximum six points. The Australians went on to win by 12-4.

Other winners in this session were Canada, who beat Hungary by 10-1 in six ends; Scotland, whose 8-4 win over Germany kept their unbeaten record intact; Czech Republic, who beat Turkey by 9-7; and England, whose 7-4 win over United States ended the Americans’ unbeaten run.

Following Australia’s opening full-house six-ender, they followed up with single steals in the next two ends to hold an 8-0 lead after three ends.

Spain got themselves onto the scoreboard with two points in the fourth end.

Spain then managed to score another two in the sixth end with a draw by their female player Oihane Otaegi, to reduce Australia’s lead to 9-4. However, the Australians scored three in the seventh to win the game by 12-4.

After this first win, Dean Hewitt said, “We’ve been close in a few games, and we’ve struggled a little bit with the ice. But we’re trying to get on top of it and learn as we go.”

His partner, Tahli Gill added, “Ideally, we’ll have a few more wins now. The reality is that we have to win all of our games now to be maybe in contention. We’re still pushing to win as many as we can.”

The Scots had an early 4-1 lead when, in the fourth end, Germany’s Pia-Lisa Scholl got her final draw inside two Scottish stones to score one. This reduced the Scottish lead to 4-2 at the break.

However, in the fifth end, Scotland’s Eve Muirhead played a draw to score two more points and increase her team’s lead to 6-2.

In the seventh end, Muirhead cleared out a German stone to score two more points and finish off an 8-4 win that puts the Scots unbeaten alone at the top of the group rankings.

The Americans held a 2-1 lead when, in the third end, England’s Anna Fowler played a hit to score two points and re-take the lead, at 3-2.

England then had single steals in each of the fourth and fifth ends to increase their lead to 5-2.

In the sixth, United States’ Becca Hamilton attempted to score two points with a hit, but she failed to keep her own stone in play. It meant that the Americans could only score one, leaving England still in the lead, by 5-3.

Eventually, in the eighth end, United States did not have enough stones to score more than one point and England won by 7-4.

This was a second win for England and a first loss for United States, knocking them off the top of the table.

Afterwards, England’s Ben Fowler said, “The ice was different today and that was really helpful for us. We managed to get the weight nicely and consistent, and when it’s consistent we play well. That was the difference.”

His sister, Anna, added, “We’ve had a tricky start to the week, so it’s really good to get a couple of wins under our belt. And you know what… if we play like that, we’ll contend against most of the teams. So more of the same and hopefully we’ll get some more wins on the board.”

Canada were lying third in the rankings when they came on to play Hungary.

The Canadians dominated the first half of this game, leading by 6-0 after three ends, thanks to steals in the second and third ends.

However, in the fourth, a draw by Hungarian female player, Ildiko Szekeres inside two Canadian stones gave her team what proved to be their only point of the game, for 6-1.

In the fifth end, Canada’s Jocelyn Peterman drew her last stone into a busy house to score three points and increase her team’s lead to 9-1.

The Canadians then stole one more point in the sixth, and Hungary conceded with a final score of 10-1.

This result means that Canada and United States now share second place behind unbeaten Scotland, both with one loss.

For this game, the Turks had changed their throwing order, with female player Dilsat Yildiz now playing first and last stones.

After the first end, Turkey were leading by 1-0. In the second end, Czech Republic’s female player, Julie Zelingrova played a hit, to score five points for a 5-1 lead.

The Czechs led by 8-4 when, in the sixth end, Turkey’s Yildiz played a hit to score two points and reduce the Czech lead to 8-6.

Despite this late pressure, the Czechs resisted, to win by 9-7, leaving Turkey as the only team in the group still looking for a first win.

After their third win of the week, Czech male player, Vit Chabicovsky said, “We had a few lucky breaks actually, they played really well, they just have been really close on some of her last shots that she didn’t make in the end. So, we got a few lucky breaks there and finally we have more wins than losses, so that feels nice. So far so good.”