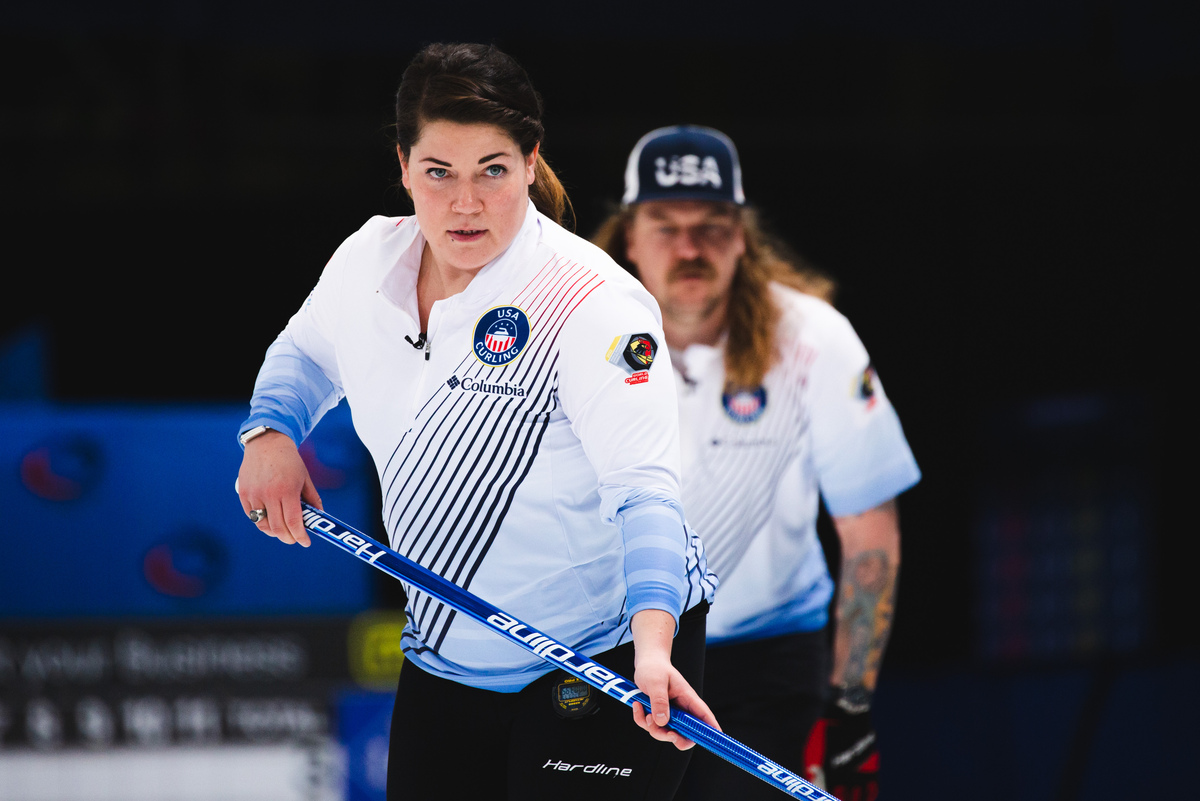 In this session, there were wins for Canada, Hungary, Scotland, Spain and United States.

America’s sister and brother duo — Becca and Matt Hamilton — found themselves down by 3-0 after the first two ends of their game against Czech Republic.

However, they levelled the score at 3-3 in the third when Becca Hamilton was successful with a draw, although it took an umpire’s measure to confirm the third point.

After this, the Americans took control with steals of two in each of the fourth and fifth ends for a 7-3 lead.

The Czechs responded, scoring three in the sixth end to reduce the American lead to 7-6, but United States went on to win by 9-6.

Afterwards, Becca Hamilton spoke about their slow start, saying, “We’re just learning the ice right now, and there’s a lot of games left this week. So, we’re just hoping to learn off the shots we made there.”

Her brother Matt added, “We got the ‘W’ and that’s all you can ask for.”

“We just want to have a good time here. Typically, when we enjoy ourselves, we play well, so the goal really is not to get frustrated or upset with each other. As long as we enjoy our time here, have fun and play, I think the results will come”, he added.

Canada played Germany in this session. In the third end, Canada already held a 3-0 lead and when Germany’s Pia-Lisa Schoell came up short with her final draw, the Canadians stole two for a 5-0 lead.

The Canadians led by 6-3 as the teams played the seventh end. When Canada’s Jocelyn Peterman scored three with a draw in this end, Germany conceded with a 9-3 result.

In their game against Australia, Hungary opened well when their female player Szekeres Ildikó played a tap-up in the first end for two points.

Another draw by Szekeres in the fourth end produced another score of two, and a 4-2 lead.

Yet another final draw by Szekeres in the sixth end resulted in three points and a 7-3 lead. Hungary went on to win by 7-5.

Spain played Turkey in this session. In the fifth end, with Spain holding a 4-1 lead, their female player Oihane Otaegi nudged her stones into position to score two more points and increase her team’s lead to 6-1.

In the seventh end, Spain called their power play and Otaegi played a draw to score three more points for a 9-2 score-line. Turkey then conceded the game.

This was a first win at this Championship level for this Spanish duo, and afterwards, a delighted Mikel Unanue said, “After one year waiting for a win in this Championship, it feels more special than for any other team. We feel really proud of ourselves, now we have to keep playing and improving.”

Otaegi added, “The first game is always difficult, and we’ve been learning a lot. But that was a good start for us, and we hope it will continue.”

The fifth game of this session featured an England-Scotland clash.

After four ends, Scotland held a 3-2 lead. When England’s Anna Fowler could not find a way into a very busy house with her final stone of the fifth, her team gave up a steal of three to double Scotland’s points at 6-2. The Scots scored two more points in the seventh to win the game by 8-3.