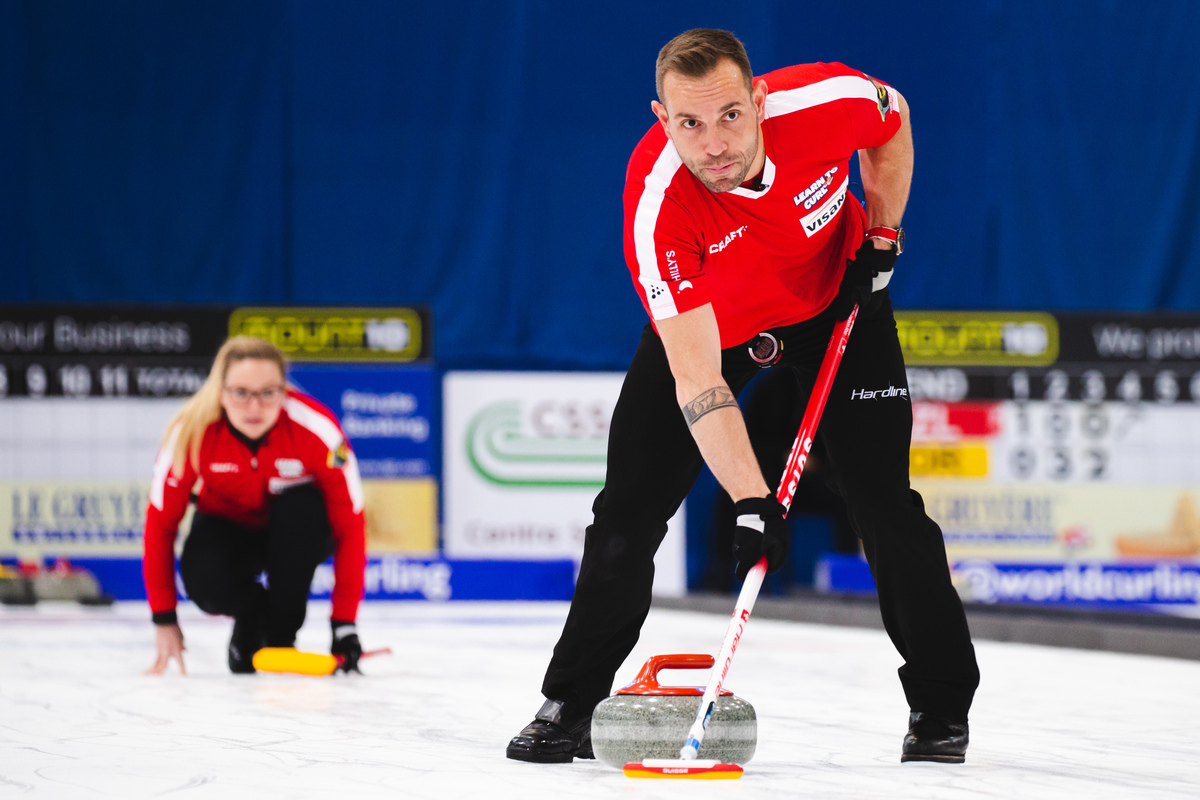 The World Mixed Doubles Curling Championship 2022 got underway on Saturday morning in the Sous-Moulin Sports Centre in Geneva, Switzerland. There were wins for Denmark, Italy, Korea, Sweden and Switzerland in the opening round-robin session.

With Olympic champion Amos Mosaner’s late withdrawal because of injury, Italy’s other Olympic gold medallist Stefania Constantini is having to play with a new partner — Sebastiano Arman — this week.

The Italians faced Japan in their opener. In the first end, Constantini played a delicate tap-up to open the scoring with two points. She followed that up with a draw for one point in the third to move Italy onto a 3-1 lead.

Then, in the fifth, Constantini played a nose-hit to score four points and take a 7-3 lead.

The Italians went on to win by 10-3, and afterwards, Arman explained how he felt about his unexpected call-up.

He said, “It’s a bit strange for me to be here. I was very nervous before the game — and I’m nervous now. It was difficult to come here when Amos should be here. He’s an Olympic champion and it’s not easy to play in his position. But we played a good game.”

Constantini also said, “It’s always good to start with a win. This is the first game we’ve played together, and I think we did a great job.”

The game on the next sheet was a battle of siblings, as Norway’s Maia and Magnus Ramsfjell played Sweden’s Isabella and Rasmus Wranaa.

Sweden opened with a score of two points with a well-judged draw. By the seventh end, Sweden led by 5-3 when Isabella Wranaa hit out a Norway stone to score two points and move onto a 7-3 lead.

The Danes moved into a 3-1 lead in the second end, when, after a tap-out of a Finnish stone, an umpire’s measure gave them a score of three.

The Danes followed that up with a single steal in the third end. Then, a further score of three in the sixth put them well on the way to an opening 7-5 win.

Estonia opened with a single steal in the first end.

In the second end, Switzerland’s Alina Paetz was wide with her final draw and had to settle for one point from another Swiss stone already sitting on the button.

Switzerland had a steal of two points in the fourth end when Estonia’s Marie Kaldvee’s draw attempt over-curled.

In the sixth end, with the Swiss already leading by 4-2, Paetz played a nose-hit to score three points and take 7-2 lead, on the way to an eventual 9-2 win.

Afterwards, Paetz spoke about her shot in the sixth end, saying, “I was surprised that shot was so close to the guard to make it, but Sven wasn’t worried about that.”

More generally, her teammate, Sven Michel said, “We had to figure out the ice, so the first few ends were a bit difficult, but overall, we managed it.”

In the second end, with New Zealand ahead by 1-0, Korea’s Kim Minji played a draw to score three points and take a 3-1 lead.

Later, in the sixth end, with the score at 7-2 to Korea, the New Zealanders called their power play. This led to their female player Natalie Thurlow drawing for two points, to reduce the Korean lead to 7-4. However, Korea then went on to win by 9-4.