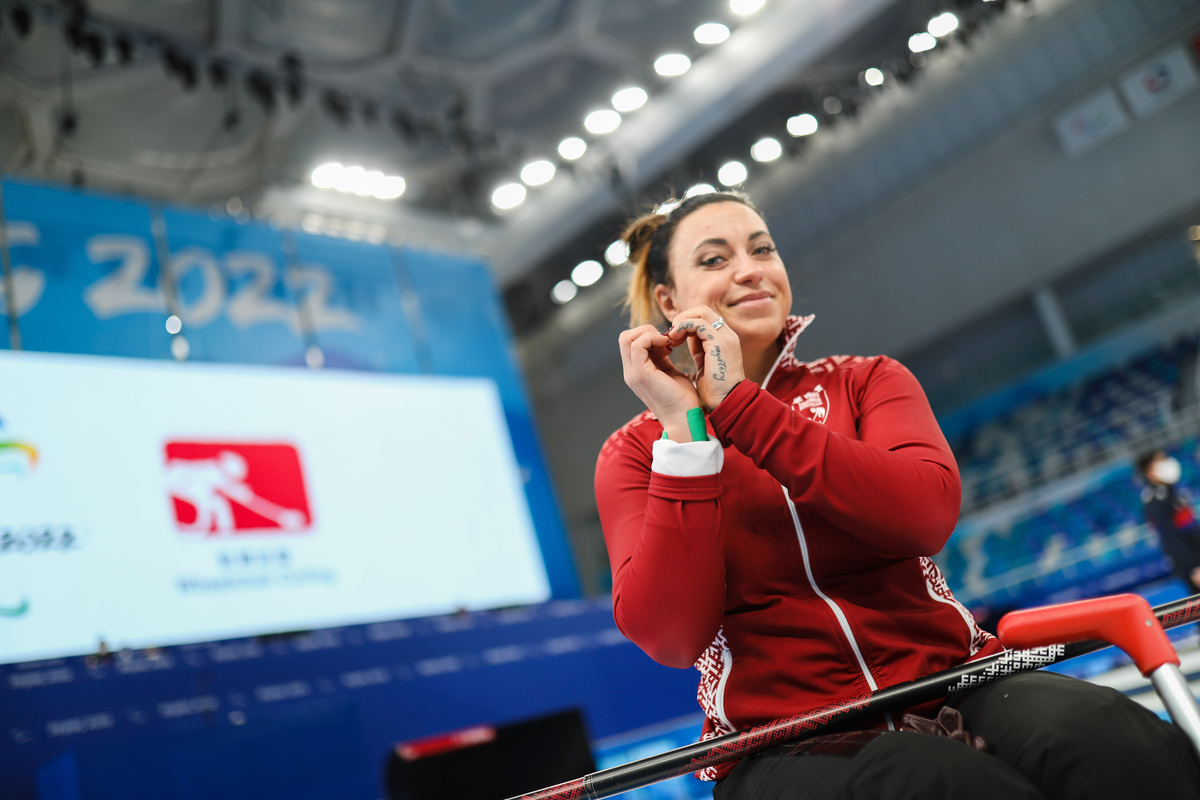 With the Paralympic Wheelchair Curling round robin well under way, many will be asking how much time and effort goes into reaching the pinnacle of winter sports.

Now multiply that time, effort, passion, money and talent by two and we reach the standards achieved by Latvian skip Polina Rozkova.

The 36-year-old is not just a world class curler, she has also competed at the elite level in both fencing – featuring at the 2016 Rio de Janeiro Paralympics – and tennis.

At the Rio Paralympics she competed in the sport of wheelchair fencing, demonstrating her elite athletic talents on the grandest stage.

“My overriding memory of Rio was outside of competition,” said the Riga-native.

“The best experiences were meeting all the fantastic people from across the world; all the officials who gave us a warm welcome and the medical staff on site.

“Not forgetting the location, I very much enjoyed the beach and the ocean which was coupled with the fine weather.

“The very tasty Caipirinha – Brazil’s national cocktail – topped it all off.”

Rozkova competed in the Women’s Individual Epee Category A, where she squared off against athletes from China, Poland, Ukraine, Hong Kong and Hungary.

Unfortunately, Polina was unable to qualify from the pool stages, and her summer Paralympic journey ended earlier than she would have liked.

Competitive by nature, Polina suffered a spinal cord injury in a snowboarding accident in 2009 – another sport she still loves despite the accident.

Rozkova always wanted to compete within sport – she was an aerobic coach prior to her injury – and she gave up her job to pursue, and maintain, the training required to compete on the international stage.

“While my mother was alive, I had to ask her if I could leave my job so I could put everything I have into the thing I love, sport.

“We managed to make it work, curling and fencing were situated on different sides of Riga, and it took a lot of time just driving – and affording petrol – to each place.”

Polina’s proactivity is one of the main reasons she has enjoyed success in a variety of sports. She sought out opportunities at every turn to meet fellow wheelchair users and develop new skills:

“I was searching for people in wheelchairs around Riga to learn about their experiences and what sports they like to do. It was important for me to learn more about what I could do in a wheelchair.”

Being a two-sport athlete comes with its downfalls. Rozkova needs to taper her training for one sport or the other depending on the time of year.

“The schedule is very busy; everything is planned for one-two months,” explained the Latvian when discussing her hectic diary.

“We also can’t forget things such as visiting the hairstylist, getting a manicure; these things matter too.”

Despite her athletic prowess, Rozkova is currently a part-time competitor, and must balance her life around the sports she loves. Polina is currently employed by the welfare ministry in Latvia, helping people with similar conditions to herself access the help they need.

Having appeared in three successive wheelchair curling world championship appearances in 2019, 2020 and 2021 – each time just missing out on the playoffs – Rozkova explains that, while many in elite sport have the time to analyse and focus on these performances to get better, it’s difficult for her to do so due to her part-time status.

“It would be easier to learn from these experiences if it was our full-time job, but unfortunately, we don’t compete very often, so every time we go onto the ice it’s a new experience and feels like we are starting again.

“I can’t explain how important a moment this is for me,” explained Rozkova when discussing her opening ceremony duties, “I honestly can’t really put the feelings I have into words.”

“We are not just here to make up the numbers,” Polina added when discussing her goals for the Paralympics, “our aims are very high.”