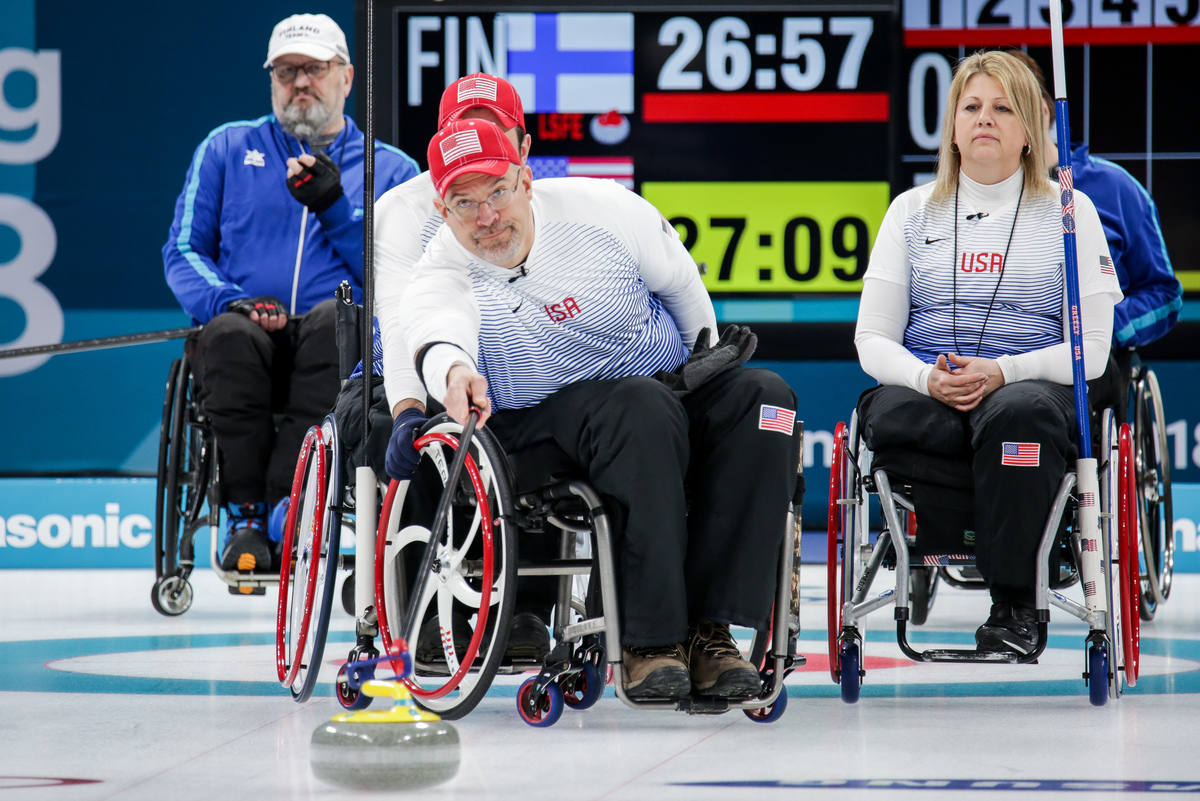 As Stephen Emt pushed his way to a bakery on holiday in the town of Cape Cod, Massachusetts, little did he know he’d just secured his future as a Paralympic wheelchair curler.

“I’d just checked into a hotel and they recommended heading to a bakery to get something to eat,” explained Emt when discussing his introduction to the sport.

“I parked my truck and pushed up this hill to the bakery. I got something to eat and was sitting outside when an older gentleman approached me.

“He said, ‘I train with the Paralympic Curling Team here on the Cape and I saw you pushing up the hill, and with your build I can turn you into a Paralympian in a year’.”

“What the heck is curling? And where do I sign up???,” was the response.

“He was just driving down the road when he saw me. He parked his truck and walked around the town for 45 minutes until he found me.

“He stalked me! I got stalked into this sport!

“I am so grateful for Tony doing that and giving me the opportunity to learn about this beautiful sport and training me to the level of where I am today.”

The training has certainly paid off as the 52-year-old will vice-skip United States in Beijing, four years after making his Olympic debut in PyeongChang.

“The overall experience of being a Paralympian and representing the USA was an incredible, life-changing experience for me,” explained Emt.

Despite the thrill and excitement of representing the Stars and Stripes on the grandest stage, the rink’s performance on the ice did not go as planned.

“The curling itself was awful,” he said of the 2-9 round-robin performance which dropped United States to last of the competing nations in 2018.

“As individuals we all did pretty well, but as a team we were bad. We underperformed as a team and our record reflected that.”

Despite the obvious disappointment that came from a 12th-place finish in Korea, Emt attempted to take the positives and learn from the experience.

“In life, sport, business — anything really — there is winning and there is learning. There is no losing.

“USA Curling has put more emphasis on the commitment of its athletes, changing some of the personnel in the team. It took 100% investment in the programme to remain involved in the team.”

Emt holds a claim to fame, he appeared in the much-lauded documentary ‘The Last Dance’ — which focused on NBA legend Michael Jordan’s final season as a professional.

“It was an incredible experience,” explained Emt of his meeting with Jordan.

“I was fortunate enough to spend 30 minutes with MJ in the locker room after a game.

“It was a Saturday night around 10:30 or so and he could’ve gone home to his wife and kids, but he chose to hang out with me and a buddy for a little bit. We talked about basketball, cars, kids, etc.

“He taught me that night that no matter how big you are, — and they don’t get much bigger than Michael Jordan — that you always need to leave time for others in your life.

“He impacted my life that night and that is something that I took from him.”

Preparing for his second Paralympic Games

Heading to his second Paralympic Games, Emt admits that the COVID-19 pandemic has affected his preparation. However, he has taken the opportunity to improve the off-ice elements of his game.

“Curling clubs were shut down so I needed to turn my training focus from physical to mental and it improved my game,” discussed Emt his Paralympic preparations in the midst of the pandemic.

“Meditation, positive imagery, mindfulness, dry-firing in my house — all things that helped the mental side of my preparation so when the clubs did open back up, I was able to get back on the ice and not miss a beat.

“In fact, my game was better once the clubs opened back up because of my mental preparation. My daily training now consists of both physical and mental prep every day.”

Ahead of his second Games, Emt does have one regret in his curling career — not learning earlier in his life about opportunities the sport could bring.

“I found this wonderful game at the age of 43, 18 years after my accident that resulted in my paralysis.

“I wish I found this game right after my accident, but at that time I didn’t realise there were even the Paralympics and that there was any chance of me representing my country.

“I would tell my younger self, at the age of 25 when I became paralysed, that you need to get out and get involved with adaptive sports and try them all. Something will click and you will have a sport that you could excel in. If I knew this back at the age of 25, I could be going on my 4th or 5th Paralympic Games.”

Engage with the World Curling Federation ahead of the Beijing 2022 Paralympic Winter Games on Twitter, Instagram, Facebook and Weibo and by searching the hashtag #Beijing2022 #wheelchaircurling