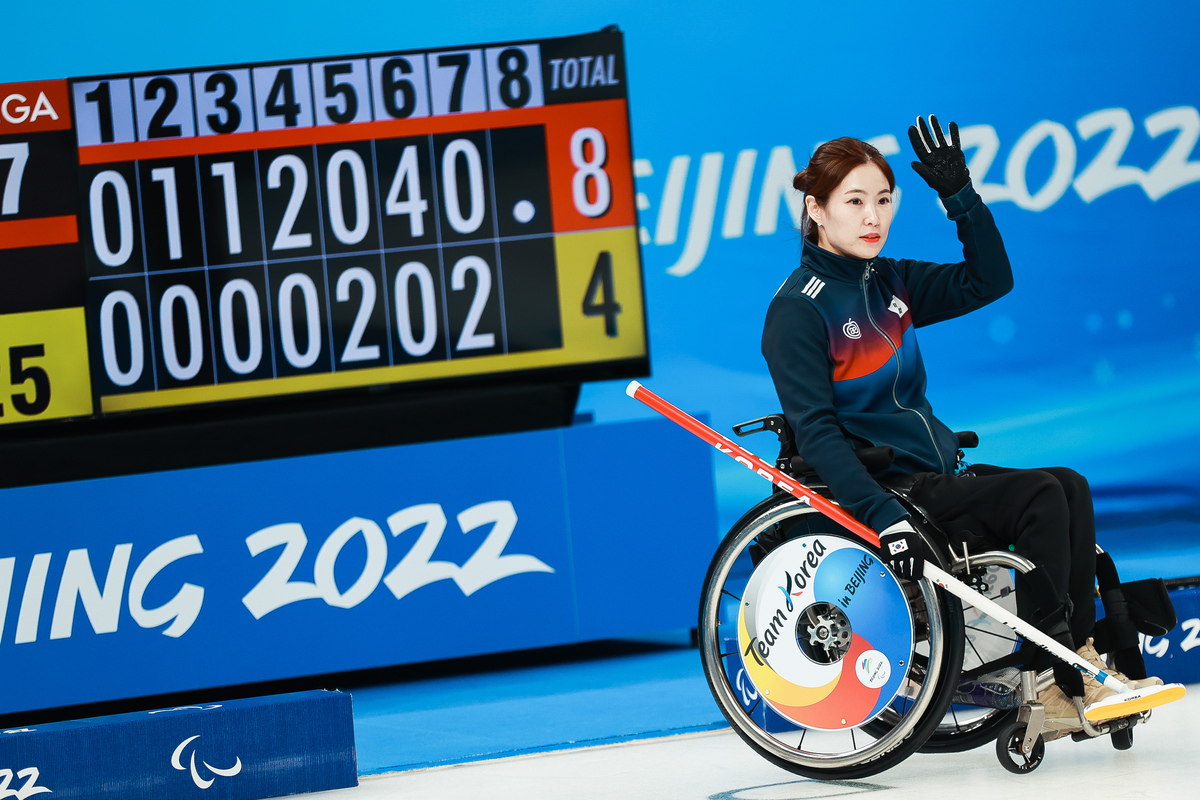 Round-robin play continued in the Ice Cube with three games on Tuesday morning.

Korea and Canada played against each other in the re-match of the Paralympic bronze medal game four years ago, Switzerland took on Latvia, while Great Britain met Estonia. Korea, Latvia and Great Britain were the winners of these games.

In the third end, Jang played an excellent draw to sit shot stone. Thurston’s take-out attempt wrecked on a guard, and Canada gave up another single-point steal.

In the fourth end, Korea played an exceptional draw game, and Canada had a couple of take-out misses. It resulted in a steal of two points for Korea and a 4-0 scoreline in favour of Korea, going into the break.

Canada put their first points on the board in the fifth end, scoring two and narrowing the gap to two points.

At the start of the sixth end, Korea changed their line-up, and Go Seungnam came to play third stones instead of Jung Sunghun. In that end Korea scored four points and took an 8-2 lead.

In the seventh end, Canada scored two and reduced their deficit to four points, 8-4.

In the eighth end, Thurston had a nearly impossible shot with his last to keep Canada in the game. He wasn’t successful with it, and Korea won the game without needing to throw their last.

The final result was 9-4, Korea winning and picking up their second victory.

Latvia had a fantastic start to their game against Switzerland, scoring three in the first end, partly due to two perfect draws by skip Polina Rozkova.

After forcing Switzerland to take a single point in the second end, Latvia scored two in the third to go up 5-1.

In the fourth end, Latvia stole a single point, and the teams went into the break with a 6-1 half-time score, Latvia leading.

Switzerland started the second half of the game in an excellent manner, scoring three in the fifth end.

In the sixth, the Swiss stole three points after two missed stones from Latvia’s Rozkova.

Going into the seventh end, Switzerland was leading the game for the first time, 7-6. In that seventh end, Latvia scored two and took back the lead, 8-7.

Switzerland’s skip Laurent Kneubuehl was facing three Latvian counters when he played his last draw of the eighth.

After he had thrown his stone, an umpire’s measure was required to decide which stone was shot.

It turned out that the yellow Latvian stone was closest to the button. It meant that Latvia stole the end and won the game by 9-7.

Afterwards, Latvian skip Polina Rozkova said, “It was a nerve-racking and stressful game. Luck was on our side today.”

Estonia put a single point on the board in the first end. They had a chance to score two points, but their skip Andrei Koitmae rolled out of the house with his last take-out stone, and needed to settle for one.

In the second end, eight guards were in front of the house after the first nine stones had been thrown — four guards each.

In the second half of the end, both teams attempted to tap their guards into the house. Great Britain was more precise with their attempts, eventually scoring three points.

After stealing two points in the third, Britain was leading the game by 5-1.

In the fourth end, Estonia scored three points, primarily due to two great shots by Koitmae.

The teams went into the break with a 5-4 scoreline, Great Britain leading.

In the fifth end, Britain put four points on the board with precise draw play.

In the sixth, Koitmae’s double take-out attempt with his last stone was only partly successful, leaving a British stone in shot position. It meant a steal of one point for Great Britain and a 10-4 scoreline after six ends.

After scoring a single in the seventh end, Estonia conceded defeat with a 10-5 final result.

After the game, Britain’s second played, David Melrose said, “It was good! We kind of started to control right from the beginning with the large end that we got. Generally, after that it was just trying to keep it clean and just keep taking over. It was a good game.”

Talking about their team dynamics, he added, “I think we learned a lot at the worlds in October and it’s quite a new team. There’s two senior players and three newbies, so it’s coming together really well to be fair. We are really quite honest and we got each other’s backs, so it’s a good foundation to build a team on.”