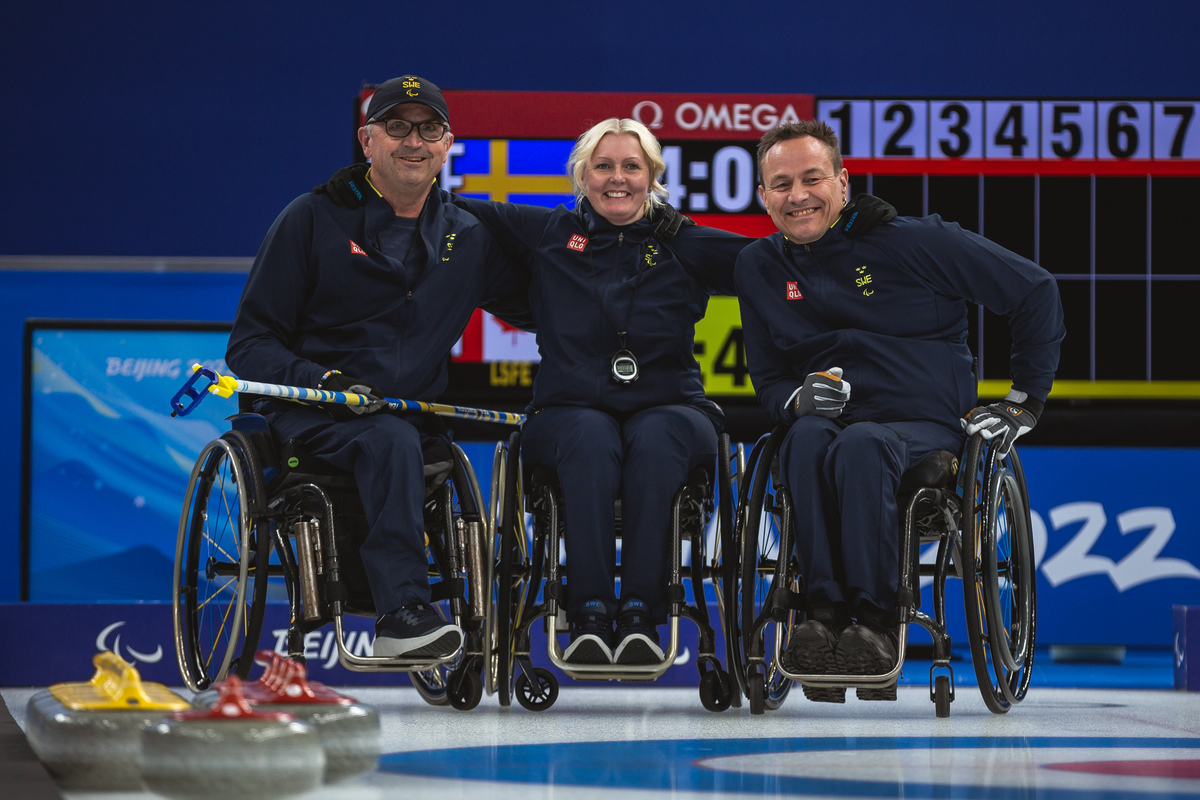 The Paralympic venue for wheelchair curling saw four games played on Monday evening. From these games, Sweden, China, Slovakia and United States came out on top, finishing day three of round-robin with wins.

In a battle to retain first place in the standings, Canada met World silver medallists, Sweden in a tense game.

In the second end, Canada missed an opportunity for two points when fourth thrower Jon Thurston was heavy on his final draw, making the score level at 1-1.

In the fourth, Thurston faced a double take-out for one, but it didn’t curl enough, resulting in a steal of two for Sweden and a 5-1 lead.

With the last stone once again, Canada played a hit for a possible four points in the fifth end, but the stone ticked off the guard, resulting in a single instead.

The Canadians applied pressure in the sixth end, forcing Sweden to hit against two, giving up a steal of one for a 5-3 score.

“We started the game very well,” said Sweden’s Kristina Ulander. “Then it was very close sometimes, but we took control. We worked together to stay calm and stay focused and make out shots.

With this, Canada suffered its first loss of the competition, now with a four and one record.

In front of a lively home crowd, the hosts opened with a steal of one and then took a 5-3 lead after five ends when they played an open draw for three.

In the sixth, the Swiss had to touch the eight-foot ring to score, which they did for one point to go down 5-4.

China blanked the seventh end to retain the last stone advantage into the eighth, up by one point.

In the last shot of the game, China’s skip Wang Haitao needed to make a hit to win, and he did so for a score of two points and a 7-4 victory.

Slovakia opened the game with the last stone, and had a solid first half taking a 5-1 jump against the Brits after the halfway point.

With strong defence from Slovakia, they managed to keep Great Britain’s scoring to just single points in both the fifth and seventh ends to go into the last end leading 6-3.

With a Britain miss on their last stone, Slovkakia didn’t need to throw their final shot and won by 7-3.

“Our performance in my opinion was very good,” said Slovakia’s Monika Kunkelova. “We played very nice stones and not so many mistakes from our side.”

We were thinking “don’t lose our lead!’ she said on the team’s early scores.

“We are satisfied [so far] and we hope it will be better.”


Following an easier loss in the day, Norway came out strong against the Americans with steals in the third and fourth ends to go up 4-1.

United States had a chance for two in the fifth end, but wrecked on a guard and scored just the single to make the score 4-2.

But, the Americans battled back in the second half of the game, scoring two points in the seventh end to close the gap, 5-4 for Norway.

In the last end, the Norwegians faced three opposition stones, and needed to hit and stay for shot stone to win. The attempt didn’t curl enough, and the shooter rolled out of the rings, giving United States a stolen two points for the 6-5 victory.