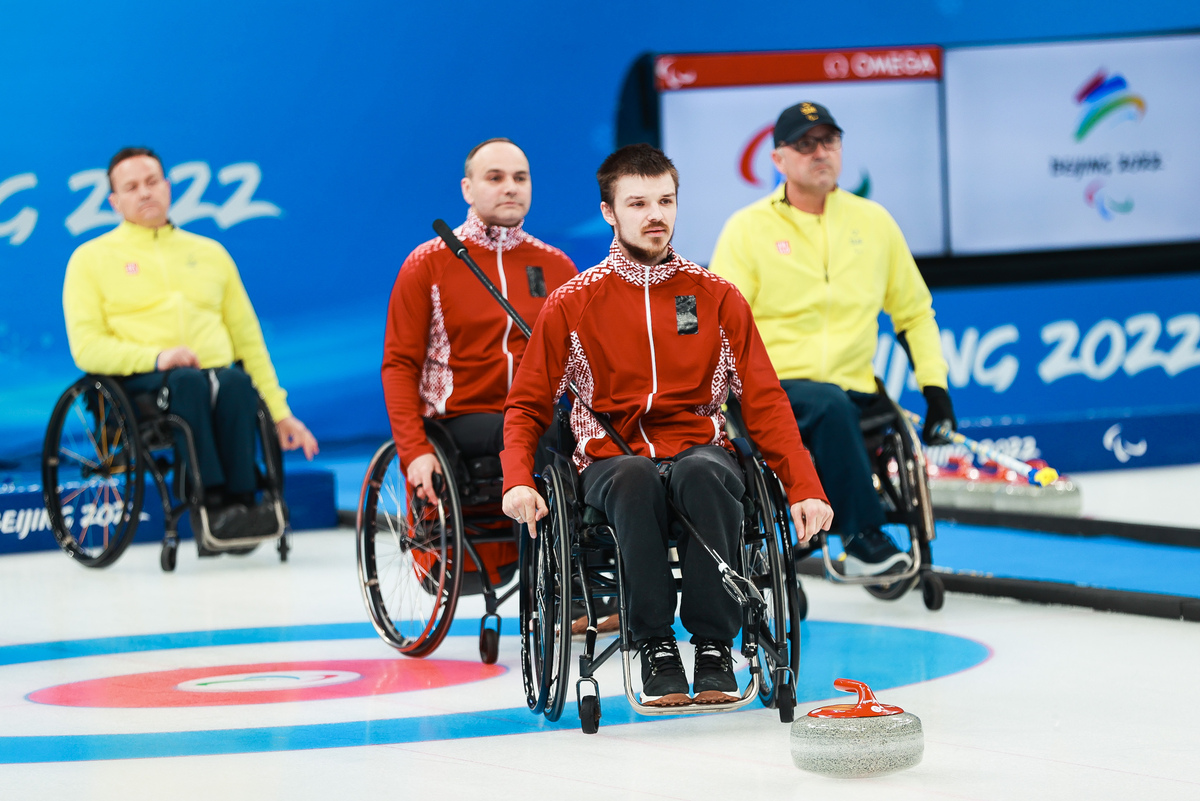 Despite a perfect clearing by Ronny Persson earlier in the first end, Sweden’s skip Viljo Pettersson-Dahl was facing three Latvian stones when he played his last. His draw attempt wrecked on their own guard, giving up a steal of three.

In the second end, Pettersson-Dahl couldn’t execute on his double take-out attempt with his last stone, and Sweden gave up another point.

Sweden got on the board with two points in the third end after two precise draws by Pettersson-Dahl.

Latvia was leading the game by 5-4 when they played the sixth end. In that end, Latvia scored three, and went up 8-4.

In the seventh end, Sweden scored three points right back with precise draw play, and reduced their deficit to a single point.

In the eighth end, Latvian skip Polina Rozkova had an open take-out to win the game, which she executed perfectly, scoring one point. The final score was 9-7 in Latvia’s favour.

After the game, Rozkova said, “I don’t know how to feel yet, because I need to relax. So I need 15 minutes! Of course it was a great job, and we are happy with the result, but I’m a little bit empty with emotions.”

“Every win is important and my opinion is every shot is important. The important thing [in the sixth end] was to take it out and if we will be lucky, we will get three,” she added.

Norway capitalized on their last-stone advantage in the first end, scoring two.

Playing the third end, and leading by 2-1, Norway’s Jostein Stordahl came up short with his last draw attempt, giving up a steal of two.

In the fourth, Stordahl missed his target with his raise attempt, giving up a single steal. The teams went into the break with a 4-2 score, Estonia leading.

In the fifth end, Norway had a chance to score three points, but Stordahl’s last take-out attempt completely missed the targeted Estonian shot stone and Norway gave up another single steal.

In the sixth end, Stordahl’s raise attempt was unsuccessful and Norway gave up a steal of three points.

Estonia was leading the game by 8-2 going into the seventh end. In that end, Norway scored a single and then conceded defeat final a final score of 8-3.

China stole two points in the opening end when Korean skip Go Seungnam rolled out of the house after removing one of the three Chinese counters.

In the second end, China skip Wang Haitao was unsuccessful with both of his difficult take-out attempts, and gave Korea a chance to score four points.

However, as Korean skip Go was heavy with his last draw, they needed to settle for three points.

The teams went into the break with a 4-3 score, China leading.

In the fifth end, Korea had a chance for two points after a missed take-out attempt by Wang, but Go was light with his last stone and needed to settle for one.

The teams were tied at 4-4 when they played the sixth end. Korea made a couple of crucial misses in that end, and China capitalized on them, scoring five. After this, Korea conceded defeat with a 9-4 final result, China winning.

After the game, Chinese third player Chen Jianxin said, “At the beginning of the game we were in a fantastic state, but when it came to the second end I made a small mistake so it gave the Korean team a chance to catch up. But after the second end we managed to balance the game in a way that was very close. The sixth end [when we got five] was the big moment. The home crowd is more motivating than pressure.”