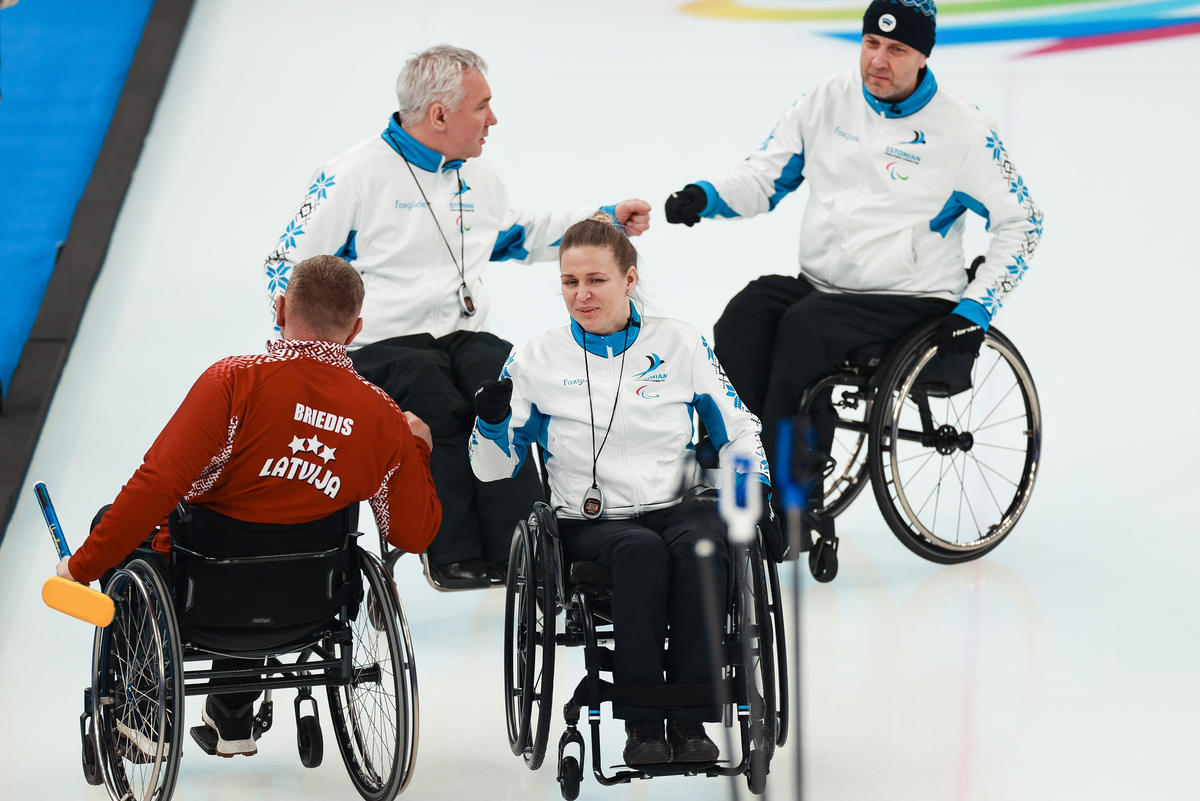 Estonia and Latvia after their game © WCF / Alina Pavlyuchik

Wheelchair curling action continued in the Ice Cube on Monday morning with three round-robin games. Estonia, Canada and Great Britain picked up wins in this session.

Estonia stole a further two points in the second when Rozkova wrecked on a guard on the way into the house with her last.

After picking up a single point in the third, Latvia stole a single in the fourth to go into the break with a 4-2 result, Estonia leading.

In the fifth, Latvia stole another single after Estonian skip Andrei Koitmae was light with his last draw attempt.

The teams were tied at 5-5 ahead of the eighth end. In that end, Estonian third player Lauri Murasov made an excellent draw behind cover that Latvia couldn’t remove with their last stone.

It gave Estonia a steal of one point and a 6-5 win. This was Estonia’s first victory on the Paralympic stage.

After the game, a delighted Estonian lead Katlin Riidebach said, “I don’t want to be mean, but I’m very happy. Because in the last years we have always lost our games with Latvia. And here, at the Paralympic Games, we got our win and this is awesome. We were equally strong and it’s an awesome feeling.”

Speaking in general about her Paralympic experience, she added, “This is extraordinary, there are so many emotions. I’m very happy to be here.”

In the North American battle, Canada put two points on the board in the first end. After blanking the second end, United States picked up a single in the third.

In the fourth, Canada scored three points due to their exemplary draw play. The teams went into the break with a 5-1 half-time score, Canada leading.

In the fifth end, American skip Matthew Thums was heavy with his last draw facing three Canadian counters, giving up a steal of two.

Canada was leading 7-2 going into the seventh end. In that end, they gave up a steal of two as Canadian fourth player Jon Thurston was not successful with his promotion take-out attempt.

Eventually, Canada ran United States out of stones in the eighth. The final score was 7-4, Canada winning and staying undefeated after four games played.

The British started the game in an excellent manner, putting four points on the board in the first end. They could have scored even five, but their fourth player Gregor Ewan was heavy with his last draw attempt.

In the second, Swiss skip Laurent Kneubuehl wasn’t successful with his attempted double take-out, giving up a steal of one and giving a 5-0 lead to Great Britain.

The Brits kept the pressure on in the third, and filled the house with yellow stones. Kneubuehl was facing five of them throwing his last. As his promotion double take-out attempt didn’t work out well, Switzerland gave up a big steal of give. After three ends, Britain was leading 10-0.

Switzerland put their first point on the board in the fifth, making the score 11-1, Britain leading.

The Britons scored another big end in the sixth, putting four more points on the board, after which Switzerland conceded with a 15-1 final score.

After their victory, British second player David Melrose said, “We all performed at the same level and it helps so much when you’re trying and get that consistency throughout the game. If we all perform, we know what we can do and what our capabilities are.”

“I’d be happy at this point if somebody had said that I had one loss to this point, that would be grand. So we got to kind of build up again and get back into the groove again for the second game we play this afternoon,” he added.