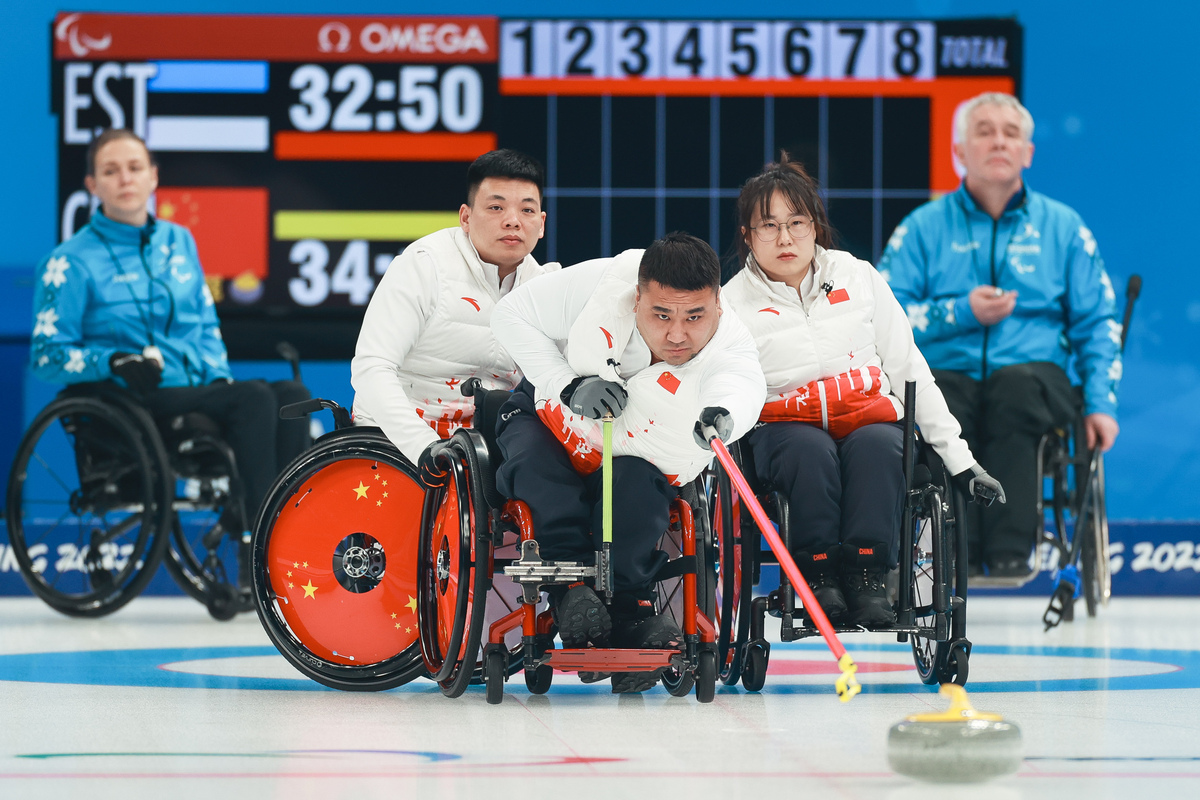 The fifth session of wheelchair curling action at the Paralympic Winter Games saw reigning champions China pick up their first victory of the tournament. Other winners of the session were Korea and Latvia.

Title defender hosts China had a great start to their game against Estonia, scoring three in the first end.

Estonian skip Andrei Koitmae came up short with his last stone of the second end, giving up a steal of one point and give China a 4-0 lead.

The Paralympic debutant European team got on the scoreboard in the third end by scoring one.

After two perfect take-outs by China’s skip Wang Haitao in the fourth end, China scored two points. The teams went into the break with a 6-1 scoreline, China leading.

Estonia put their first multiple score on the board in the sixth end, after Koitmae’s excellent double take-out with his last stone. It resulted in two points for the Europeans and a 7-3 scoreline after six ends.

After a score of two for China in the seventh, Estonia conceded defeat with a 9-3 end result.

Following their victory, Chinese skip Wang Haitao said, “We feel good and we think we performed well, we did a good job. We are in a very relaxed mood now.”

Talking about playing in front of their fans, he added, “We felt very sorry and sad when we played bad games, but when we play well, we feel very happy and excited.”

Both teams had a one win, one loss record prior to this game, seeking their second victory of the competition.

Slovakia stole a single in the first end, after Latvian skip Polina Rozkova missed her take-out attempt with her last stone.

The teams were tied at 2-2 playing the fourth end. In that end, Latvia’s Rozkova missed her take-out attempt once again, giving up a steal of two points.

In the fifth, Rozkova had a draw for two points, but came up light with her last stone, and needed to settle for a single to go down, 4-3.

After a three-way measure, it turned out that Latvia stole two points in the sixth to take a 5-4 lead.

The real turning point of the game came in the seventh end, when Slovakia’s fourth player Peter Zatko was unsuccessful with his raise attempt, giving up a big steal of three to give Latvia an 8-4 lead.

In the eighth, Slovakia conceded, making 8-4 the final result.

Prior to this game, Norway had a perfect record with two wins and no losses, while Korea was winless with two defeats.

Korea capitalized on their last-stone advantage in the first end, scoring two.

Norway put two on the board right back in the second end with a perfect tap by skip Jostein Stordahl with his last stone.

Another two-point score in the third end, followed by a steal of one in the fourth gave Korea a 5-2 lead going into the break.

Norway started the second half of the game in an excellent manner, scoring one in the fifth, and stealing a single in the sixth to narrow the gap to one point, 5-4, Korea leading.

In the seventh end, the momentum shifted once again, and due to their exceptional draw game, Korea scored four points. After this Norway conceded defeat with a 9-4 result.

After their first win of the tournament, Korea’s second player Jung Sunghun said, “We are very happy and would like to try our best in the next games. Norway played a more complicated curling game today, and they took more risks.”

About his experience at the Paralympic Games, he added, “This is our first time at the Paralympics, we feel very excited, anxious and we have some expectations. This is a complex feeling, and I will enjoy this process.”