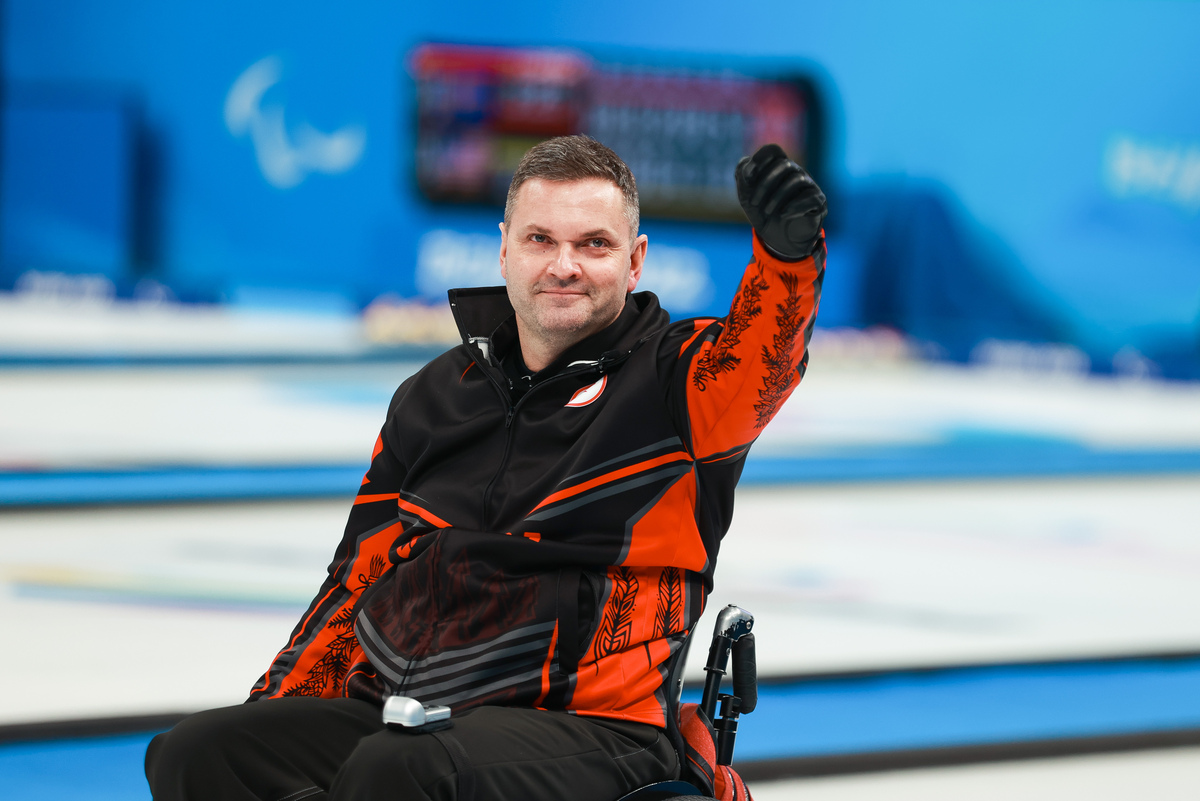 The last day of round-robin play began with four games on Thursday morning in the National Aquatics Centre.

At the beginning of the 15th session, no team had qualified for the semi-finals, but China, Sweden and Canada had a chance to do so, with a morning victory.

China, Sweden and Canada won their games, qualifying for the play-offs. The fourth winner of the session was Slovakia.

Going into this game, China shared first place on the standings with Sweden, and a win over Great Britain meant semi-final qualification for them.

China scored a single in the first end. Great Britain put two on the board in the second after two perfect draws by their fourth player Gregor Ewan.

In the third, China’s skip Wang Haitao drew to the empty house to take a single and level the game at 2-2.

Gregor Ewan was forced to a precise draw to take a single back in the fourth. He executed that perfectly to pick up one and re-take the lead at 3-2, going into the break.

China scored two in the fifth. In the sixth, they followed that up with a single steal after a perfect double take-out by Wang and a missed take-out by Ewan.

China stole another single in the seventh when Ewan was heavy with his last draw.

The teams went into the eighth end with 6-3, China leading.

In the eighth, China eventually ran Great Britain out of stones, won the game and qualified for the play-off stage.

After the game, Chinese lead player Yan Zhuo said, “I just tried to do well and I’ve been co-operating with the second and the skip.”

Talking about qualifying for the play-off, she added, “We are happy about it and I just hope to make the best of myself in the following days.”

She also commented on having the support of their fans on the stands, saying, “Their cheers just encourage us and make us perform even better.”

Top-ranked Sweden had a six-two win-loss record coming into their game against United States, knowing that a victory would mean play-off qualification for them. United States were looking for their fifth victory of the week in their ninth game this morning.

The Swedish blanked the second end and carried the hammer over to the third.

In the third end, American skip Matthew Thums came up heavy with his last stone, giving the opportunity to Sweden to score four. However, Pettersson-Dahl’s last draw attempt came up shot, and the Scandinavians only scored three.

In the fourth, Thums was heavy with his last draw attempt again and United States gave up a steal of two points.

The teams went into the break with a 5-2 half-time result, Sweden leading.

United States came back strong in the fifth end, and after a heavy draw by Pettersson-Dahl, the Americans scored four to re-take the lead at 6-5.

In the sixth United States stole a single point as Pettersson-Dahl’s promotion take-out attempt was not successful and left the American counter as shot stole.

Going into the seventh end, the Americans were leading the game by 7-5. In that end, Sweden kept putting stone after stone into the house, and United States were unable to remove them.

The Swedish ended up scoring five points and re-took the lead at 10-7.

In the eighth United States ran out of stones.

Commenting on their play-off qualification, Pettersson-Dahl said, “It feels amazing! That was the first goal, and we have achieved it so it feels great.”

Talking about the game, he added, “It was a real rollercoaster and we are not used to that. But we had a lot of misses and so did they, so we gave points to each other it felt like. But I’m really satisfied that we made two good ends in the seventh and the last end, that shows our mental strength I think.”

Prior to this game, Canada was placed third on the rankings with six wins and three losses. Based on the standings, a victory in this match-up would mean a semi-final spot for them.

Before this game, Norway picked up four wins and collected five losses. They shook up their line-up for this game, and original alternate player Mia Sveberg played lead stones, while original second player Geir Arne Skogstad sat on the bench.

Norway could have scored two in the first end, but their skip Ole Fredrik Syversen came up short with his final draw and needed to settle for a single.

In the second end, Canada scored a single back with a precise draw by their fourth player Jon Thurston.

In the third end and fourth ends, the teams exchanged single points again, to go into the break tied at 2-2.

The first breakthrough of the game came in the fifth end, when Norway put three points on the board partly due to their precise take-outs.

In the sixth, Canada scored two right back to narrow the gap between the teams to a single point.

In the eighth end Syversen’s freeze attempt with his last wasn’t perfect and it left Thurston with a take-out for three points. He executed that perfectly, which resulted in three points for Canada and a 7-6 win.

After the game, Canadian second player Dennis Thiessen said, “I didn’t realise that we have qualified, but that’s fantastic! It’s been a grind, just patience, patience, patience. So, it’s paid off. We were patient all the way through, and we knew that we get our chances and if there was a miss we would capitalise on it. And I think that made the difference in the eighth end there. He [Ole Fredrik Syversen] just came a little too heavy there and rolled off and gave us a shot for the win. So it was perfect.”

Slovakia was placed fourth on the rankings before the game with a five-three win-loss record, knowing that a victory would keep their semi-final hopes alive. Switzerland was seeking their second victory in their ninth game.

The Swiss capitalized on their last-stone advantage in the first end, scoring two.

In the second and third ends, the teams traded single points with hammer.

In the fourth, Slovak fourth player Peter Zatko missed his double take-out attempt, which resulted in a steal of one for Switzerland.

In the fifth and sixth ends, the teams exchanged two-point scores.

In the seventh, Slovakia scored five points partly due to their precise draw play and an exceptional hit-and-roll by Zatko with his last stone.

The teams headed into the eighth end with an 8-6 result, Slovakia leading for the first time in the game.

In that eighth end Slovakia eventually ran Switzerland out of stones and picked up their sixth win of the week.