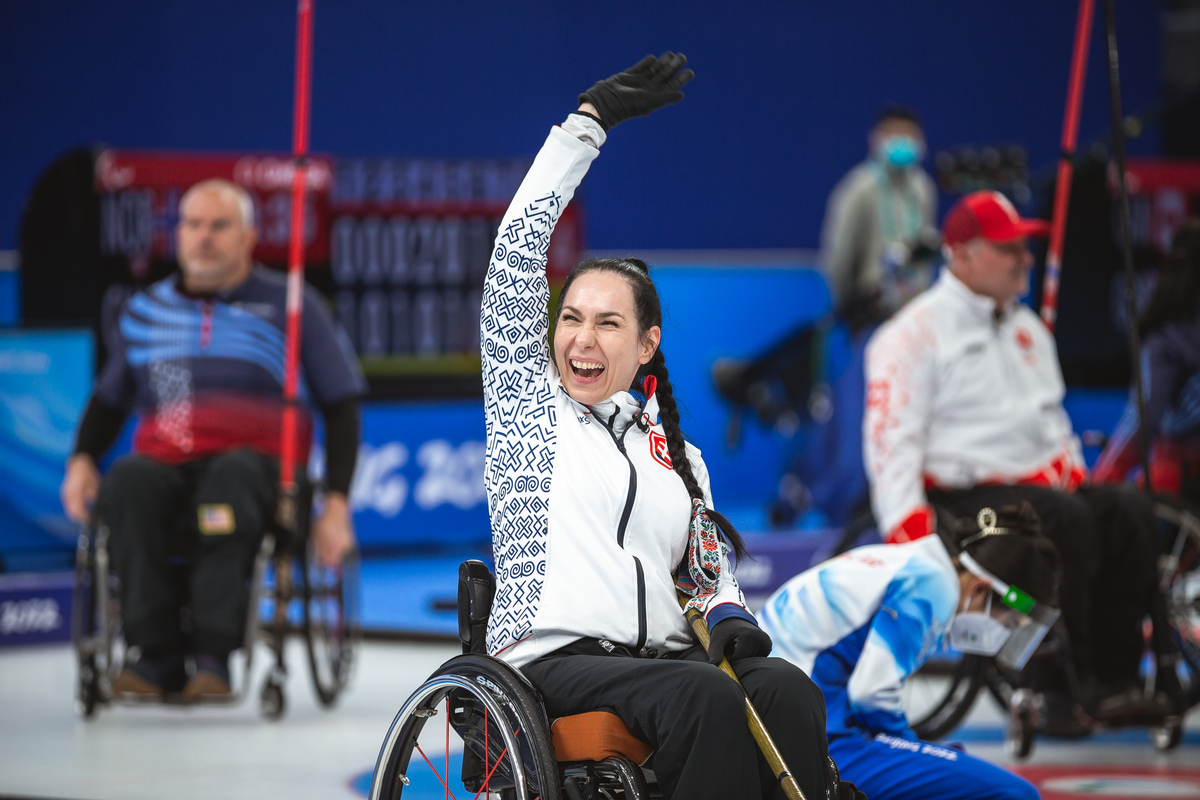 Sweden had a great start against Slovakia, scoring three in the first end, partly due to an excellent double take-out and a precise draw by their skip Viljo Pettersson-Dalh.

Slovakia picked up a single in the second end to narrow the gap to 3-1, Sweden leading.

In the third end, Pettersson-Dalh wasn’t successful with his double take-out attempt, and Sweden gave up a steal of two points.

Sweden picked up a single in the fourth, and they led the game by 4-3 at half time.

Sweden tied the game at 5-5 in the seventh end.

In the eighth end, both fourth players had an excellent draw game. As Slovakia had the hammer, Peter Zatko’s perfect last draw through a port meant a single point for them and the 6-5 win.

After their win, a delighted Slovak lead Monika Kunkelova said, “This game means a lot. To win over the favourites is exciting! We believed in Peter that he would really make the last shot. This game is not about one stone, it’s about a lot of stones, and every stone is important and this match is important, this win is important.”

China put a single on the board in the first end after a perfect draw by their skip Wang Haitao.

Norway blanked the second end. In the third, the umpire’s measure was required to decide that a Chinese stone was closest to the button. With this single steal, China led the game by 2-0.

In the fourth, Norway tied the game by scoring two, after two perfect draws by their skip Ole Fredrik Syversen.

In the fifth and sixth ends the teams swapped single scores with hammer and headed into the seventh end tied at 3-3.

In the seventh, Wang’s take-out attempt didn’t hit the shot Norway stone, but the second shot, and Norway stole a single.

In the eighth end, Norway was sitting shot stone surrounded by four Chinese stones when Wang came to play his last. He managed to clear out the Norwegian counter, which resulted in four points for China and a 7-4 win.

After their victory, China’s Wang said, “It’s still round robin so this win for me makes me feel relaxed.”

Commenting on his last shot for the win, he added, “We didn’t think too much because our opponents are a strong team and they played the last stone perfectly. So on our last stone I didn’t want to push it too hard to win. I was very emotional and excited and I didn’t let our audience down!”

United States scored one point in the first end. They followed that up with a big steal of three in the second end, when Swiss skip Laurent Kneubuehl missed his double take-out attempt.

In the third end, Switzerland got on the board with two points and they followed that up with a single steal in the fourth.

United States were leading the game by 4-3 going into the break.

In the fifth end, the Americans put another single on the board after their skip Matthew Thums’ precise draw with his last stone.

In the sixth end Switzerland had a chance to tie the game, but Kneubuehl was heavy with his last draw, and the Swiss only scored one point to go down 5-4.

Switzerland stole a single in the seventh when Thums’ raise attempt was not successful, and the teams went into the eighth end tied at 5-5.

In the eighth end, United States ran Switzerland out of stones, and won the game by 8-5.

In the last game of the session, Canada met Great Britain.

Great Britain stole singles in both the first and the second ends, after some misses from Canadian fourth player Jon Thurston.

In the third end, Canada got on the board with a single score.

In the fourth, the Canadians stole a single when British fourth Gregor Ewan was slightly heavy with his draw attempt to outscore a Canadian counter on the one-foot.

The teams went into the break tied at 2-2.

After the break Gary Smith replaced David Melrose in the British line-up due to Melrose’s injury.

In the fifth end, the Brits took a single with a perfect draw by Ewan.

Canada responded with two points in the sixth due to two great draws by Thurston.

Canada was leading the game by 4-3, playing the seventh end. In that end, Canada stole two points, following that Ewan’s shooter rolled too far after removing two of the four Canadian counters.

In the eighth end, Canada ran Britain out of stones, making 6-3 the final result.