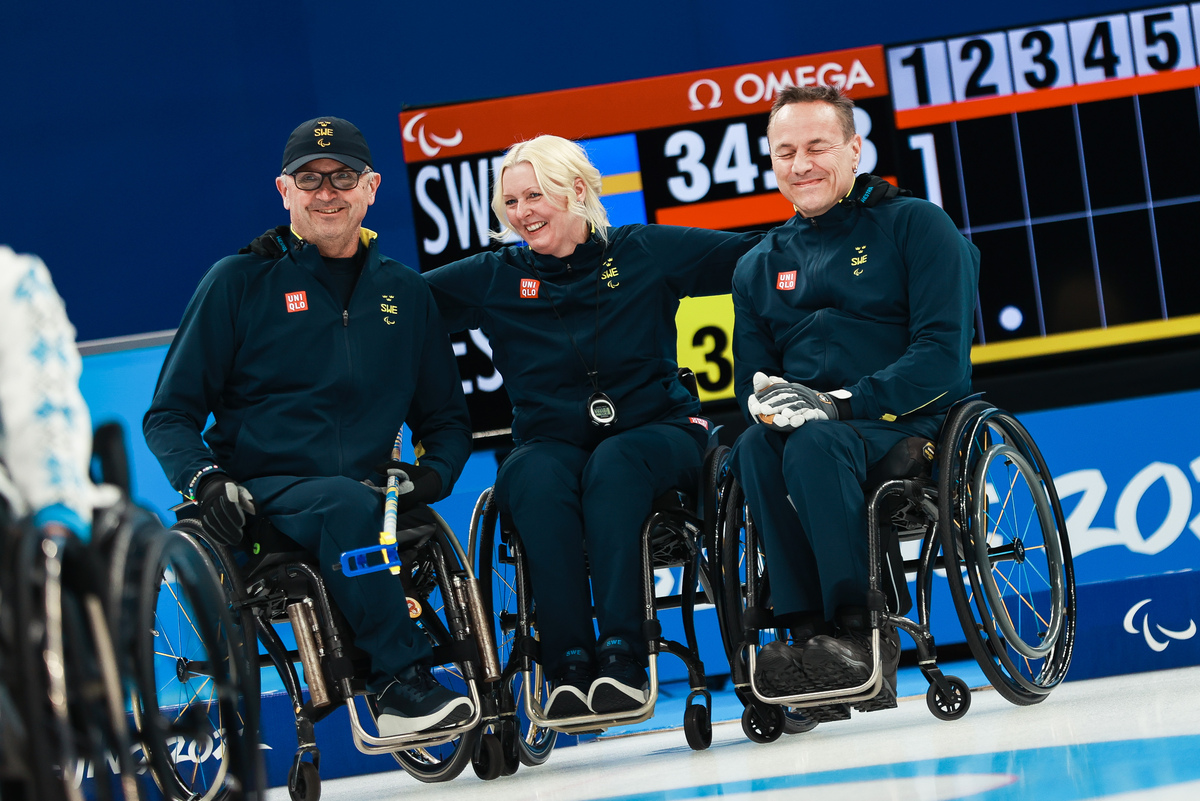 The tenth session of Paralympic wheelchair curling play took place on Tuesday afternoon in the National Aquatics Centre. Sweden played Estonia, Latvia took on Norway, while Slovakia met Korea in this session. Sweden, Norway and Slovakia emerged as winners of these games.

Sweden stole a single point in the first end when Estonian skip Andrei Koitmae could only remove one Swedish counter with his double take-out attempt.

In the second end, Estonia put one point on the board. They followed that up with a single steal in the third when Swedish skip Viljo Pettersson-Dahl was unsuccessful with his last take-out attempt.

Estonia led the game by 2-1 after three ends.

In the fourth, Sweden had a chance to score three points, but Pettersson-Dahl was heavy with his last draw attempt, and Sweden needed to settle for two.

The Scandinavians stole a single point in the fifth when Estonia’s Koitmae was heavy with his last draw attempt. After five ends, Sweden was leading by 4-2.

In the sixth, Estonia scored two points, partly due to two perfect shots by Koitmae, to tie the game at 4-4.

Sweden attempted to blank the seventh end to carry the last-stone advantage over to the eighth end, but Pettersson-Dahl’s shooter stuck around after his final take-out, and Sweden picked up a single point.

Going into the eighth end, Sweden was leading the game by 5-4, and Estonia had the hammer.

Sweden played a perfect end without last-stone advantage and had a guarded stone in the eight-foot when Koitmae played his last take-out attempt. He wrecked on a guard with it, giving up a steal of one and giving Sweden a 6-4 win.

After the game, Sweden’s lead player Kristina Ulander said, “I think we had the game under control, but they did some good stones and we got a little pressure, but we solved it.”

Commenting on claiming top spot on the standings, she added, “It feels very good.”

Norway changed their line-up for this game, and Ole Fredrik Syversen took on skip duties and threw fourth stones, while Jostein Stordahl played third stones and was the vice-skip.

Latvia capitalized on their last-stone advantage in the first end and put two points on the board.

After blanking the second end, Norway responded with two of their own to tie the game at 2-2.

In the fourth end, Latvia had a chance to score two points, but their skip Polina Rozkova just missed her difficult promotion take-out attempt, and they needed to settle for one.

In the fifth, Latvia stole two points as Norway’s Syversen was not successful with his raise attempt.

In the sixth, Norway scored three points and tied the game at 5-5.

The teams went into the eighth end with a 6-5 score, Latvia leading and Norway having the hammer.

Norway played an excellent eighth end, which resulted in three points and an 8-6 victory for them.

Both teams were seeking their third victory of the competition when they played each other in this session.

Slovakia stole a single in the first end when Korean fourth player Jang Jaehyuk wrecked on a guard with his take-out attempt.

In the second end, Jang was heavy with his last draw attempt, and Korea gave up another single point.

After another steal in the third, Slovakia was leading by 3-0.

In the fourth end, Slovakia stole another point when Korea’s Jang couldn’t execute on his difficult promotion take-out attempt.

Korea got on the board with two points in the sixth end, making the score 5-2 in favour of Slovakia.

In the seventh end, Slovakia had a chance to score three points, but their fourth player Peter Zatko came up short with his last stone, and the Europeans needed to settle for two.

With 7-2 on the board after seven ends, Korea conceded defeat.

After their win, Slovakia’s lead player, Monika Kunkelova said, “It wasn’t a comfortable win, it was a very hard work throughout the whole game. We had less mistakes than Korea, that made the difference today.”