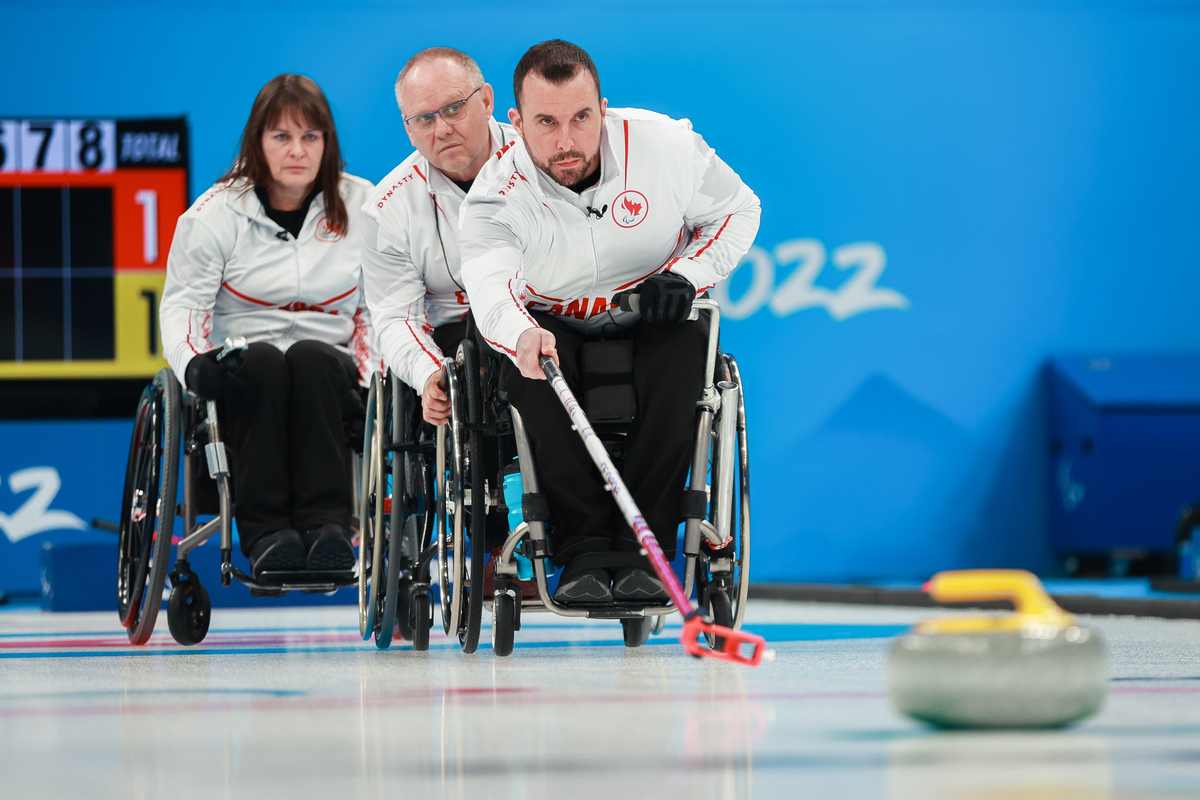 The wheelchair curling competition of the Paralympic Winter Games Beijing 2022 got underway on Saturday afternoon with four games in the Beijing National Aquatics Centre. Canada, Norway, Sweden and Slovakia were victorious in the session.

In the re-match of a semi-final from the 2018 Paralympics, reigning Paralympic champions China met Canada. In the first two ends, the teams exchanged single scores, even though they attempted to blank the ends both times.

Canada made their breakthrough in the fourth end, scoring three points, mainly due to two perfect shots by fourth player Jon Thurston.

Canada led the game by 4-2 going into the fifth end. In that end, Wang Haitao’s complete miss on his last take-out attempt gave a steal of one point to Canada.

China couldn’t generate a multiple-score in the sixth end and needed to settle for a single to go down 5-3.

In the seventh, Canada had a draw for three points, but Thurston was heavy with his last draw attempt, and they only scored two for 7-3.

In the eighth end, Canada ran China out of stones, making 7-3 the end result.

After their game, Canada’s second player Dennis Thiessen said, “I think our team came really prepared, we’ve had great training sessions and we changed a few things, and we worked our butts off. And hopefully it’s gonna show all week.”

Reflecting on that they defeated the reigning Paralympic champions, he added, “We knew that they’re seeded number one and the fanbase that they will have, so for us, we knew it was a big game coming in.”

Current Paralympic silver medallists Norway dominated the first half of their game against Great Britain, scoring two in the second and stealing two in the third end.

Great Britain put a second single on the board in the fourth end, and the teams went into the break with a 4-2 result, Norway leading.

Great Britain started the second half in an excellent manner, stealing two points in the fifth as Norway skip, Jostein Stordahl wasn’t successful with his last take-out attempt.

Leading by 5-4 after six ends, Norway stole two points in the seventh end when Great Britain fourth player Gregor Ewan wrecked on a guard with his last draw attempt.

Current world silver medallists, Sweden started strong against Switzerland, scoring two in the first and stealing two in the second end to take an early 4-0 lead.

The teams went into the break with a 5-1 half-time result, in Sweden’s favour.

The Scandinavians continued to dominate the game in the second half, scoring three points in the fifth, and stealing a single in the sixth end.

After putting a single score on the board in the seventh end, Switzerland conceded defeat with a 9-2 end result.

Slovakia had a flying start to their game against United States. After two perfect stones by Slovak fourth player, Peter Zatko, they scored two in the first end.

They followed that up with a big steal of four points when, in the second end, United States skip Matthew Thums wrecked on a guard with list last draw attempt to score a single point.

The Americans got on the board with a single point in the third to reduce their deficit to 6-1.

United States managed to put a multiple-score on the board only in the fifth end, a two, to go down 7-3.

After a Slovak single score in the sixth and single steal in the seventh United States conceded defeat with a 9-3 result, Slovakia victorious.

After their win, Slovakia’s fourth player, Peter Zatko said, “The second end was very crucial. We were good from the beginning of this game, they [United States] made some mistakes and we only needed to keep it simple.”

Speaking in general about his Paralympic experience, he added, “In the first dispicline of the Paralympics, our skier, Henrietta Farkasova got gold medal and we are inspired by her. We believe that we can get some success here as well.”