ROC women pick up first win at the Olympics 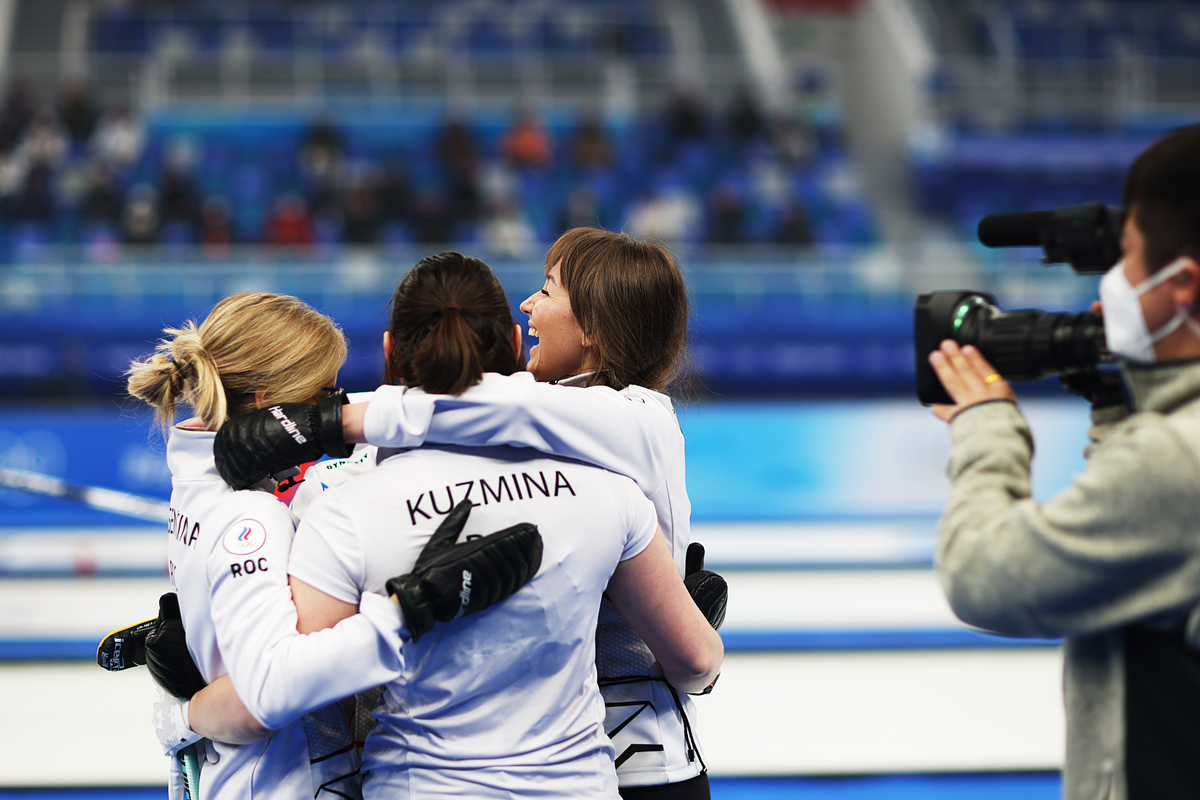 The women took to the Olympic ice in their only session of the day on Tuesday afternoon at the iconic Ice Cube.

ROC had many reasons to smile in their game against hosts, China.

With the Chinese leading 4-2 after four ends, ROC scored four points in the fifth to go up 6-4.

They had another strong end in the sixth, with multiple of their stones in the house and China did their best to minimise the potential damage. On China’s last stone by Wang Rui, she drew to the button against three for a single point to go down by one, 6-5.

ROC controlled the seventh end, with skip Alina Kovaleva making an open draw for three points to extend their lead to 9-5.

ROC went on to win, 11-5 to secure their first victory of the Games.

“We feel a bit better, but not about the win. The most important thing was that we could finally show our game and that was the main issue for us all previous games. So, finally we made very good shots and it turned out with good results,” said ROC’s second player Galina Arsenkina.

“We will try our best to keep the momentum going, but of course for us it’s a bit late to fight for the play-offs but we will fight until the end and try to show our best result in our situation.

In a game very much controlled by Sweden, the scoreboard saw them up 8-2 after five ends of play.

Denmark made a draw to the button for one against three Swedish counters to go down 8-3 after six ends.

But Sweden scored one point in the seventh end which was enough for Denmark to extend their hands and conceded the game, 9-3.

This win put the reigning Olympic champions in second place on the rankings with five wins and two losses.

“We were really excited to keep the momentum going after the win yesterday [against Switzerland],” said Sweden’s skip Anna Hasselborg.

“I think we really learned the ice really well today and we’re enjoying ourselves out there and I think that is key for us. We didn’t start with the hammer so we decided to put a lot of pressure on them in the first and we did that, then we just kept going.”

With the two skips competing against each other sine their junior days, she added, “They’re such a talented team. Maddy [Dupont] is one of those players that makes the big shots, but you always know it’s going to be a great battle out there and we were prepared to really make it hard for them.”

A missed opportunity for the Americans came in the sixth end when skip Tabitha Peterson rolled out on a hit for two points, getting just a one-point lead, 4-3, against Switzerland.

Peterson had a second opportunity for a multiple score, in the eighth end, where she made a draw to the four-foot for two, to go up 6-4.

But, the tables turned in the ninth end, when Switzerland continued to burry their stones behind a centre guard and scored four to take an 8-6 lead.

United States were unable to generate two points in the final end, and the Swiss won, 9-6. This gives them first place in the standings with six wins and one loss.

Silvana Tirinzoni, Switzerland’s skip said, “It was not our best game obviously, but that’s our team, obviously we never give up and we were fighting hard. In the end it was just good enough and we were short on time, so this game took a lot of energy.”

“I think it looks like we will qualify [for play-offs], I’m not 100 per cent sure but it was a very important game for us. If we won, like 7-1, we probably wouldn’t have cried, but, this was really a tough one.”

The Brits opened with solid offensive play, scoring three in both the first and third end to take an early 6-1 gain over Japan.

Japan had a chance to draw for two points in the sixth to mend their gap, but unfortunately the stone picked up some debris along the way, and didn’t manage to cross the hog line. It meant that Japan scored a single and went down 7-4. Britain eventually won, 10-4.