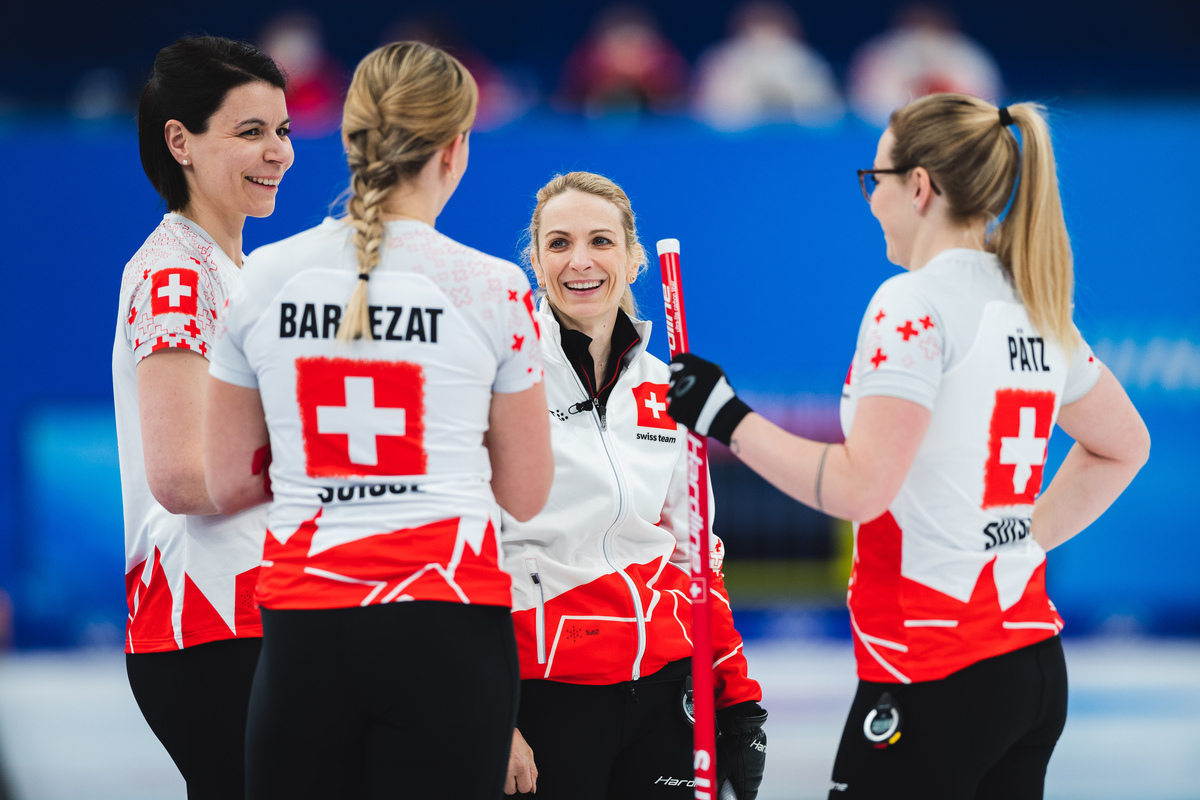 After losing their first three games so far, China turned things around in Saturday evening’s fifth session of women’s round-robin play, with a 9-6 win over defending Olympic champions Sweden.

Switzerland beat Denmark by 8-5 in this session for a fourth win that puts them in a clear lead at the top of the table, while Great Britain beat United States by 10-5 and Japan were 10-5 winners over ROC.

China blanked the first end in their game against Sweden and opened the scoring in the second end when their skip Han Yu managed to draw her second stone through a tight port out front and play a hit-and-stay for three points.

Sweden’s Anna Hasselborg responded with a hit for two in the third end. However, China followed up a score of one in the fourth with a steal of two in the fifth, when Hasselborg got her final draw wrong, giving China a 6-2 lead at the break.

A score of two in the sixth and then a steal of a further two points in the seventh brought Sweden level, at 6-6, but Han then had a draw for two in the eighth for 8-6.

Hasselborg attempted an angle raise in the ninth which did not come off, to give China a steal of one and a 9-6 lead.

Then, in the tenth, Sweden conceded without playing their last stone.

Afterwards, China’s lead player Zhang Lijun said, “I think we made very good performances today. We tried our best to fight every end. And I think we also had very good communication. Actually, we didn’t think too much about the whole game. We just thought that we need to play every end as well as possible. So, I think this is the most important.”

Although the score was tight in the first half, Switzerland always seemed in control of their game against Denmark, at least until the seventh end. In that end the Danes produced a score of three to take a 4-3 lead.

But the Swiss bounced back straightaway when their fourth player Alina Paetz had a draw for three points to restore the Swiss lead, at 6-4.

Eventually, in the tenth, and holding a lead of 6-5, Switzerland’s Paetz played a take-out to score two points with two of her team’s stones that were already in the house.

This completed an 8-5 win that puts the Swiss into a clear lead at the top of the table, unbeaten on four wins.

After this win, Switzerland’s fourth player Alina Paetz said, “It was a rollercoaster of emotion I would say. We struggled a bit with the new ice conditions, we thought it’s a bit straighter and a bit faster than yesterday, so it took us too long to recognise that. We’re just happy we could pull out the win there.”

She added, “I could definitely sleep better with 4-0 than 3-1, but we’re not even half-way through the round robin, so it doesn’t mean a lot yet to be honest.”

United States were in joint top spot with the Swiss when they came onto the ice to face Great Britain in this session.

But it was the British who came out stronger, scoring two in the first end and then stealing two more in the second when the American skip Tabitha Peterson made a mistake on a raise attempt.

After blanking the third end, the Americans got on the scoreboard in the fourth, scoring two with a draw to the button by Peterson. This meant a 4-2 score after four ends, in favour of the British.

Britain’s skip Eve Muirhead was forced to draw for one point in the fifth as her team went into the break holding a 5-2 lead.

The teams swapped twos in the sixth and seventh ends. Eventually, in the ninth, Muirhead had a draw for three points and a 10-5 scoreline.

After this win, Britain’s Jennifer Dodds said, “Last night’s game against Korea was a disappointment and we took our learnings from that game. We came out firing today and it was the draws and angles we were concentrating on. I’m proud of that performance after our loss last night, which was disappointing.

ROC faced Japan in this session, and held a 4-2 lead at the break, thanks largely to a steal of two in the fourth end when Japan’s Fujisawa Satsuki wrecked on the way into the house with her final draw attempt.

However, Japan turned things around in the second half, scoring three points in the seventh to level the score at 5-5 and then stealing single points in both the eighth and ninth ends.

Looking to score at least two points in the tenth end, ROC were left with an impossible shot, and gave up a further steal of three, giving Japan an eventual 10-5 win.