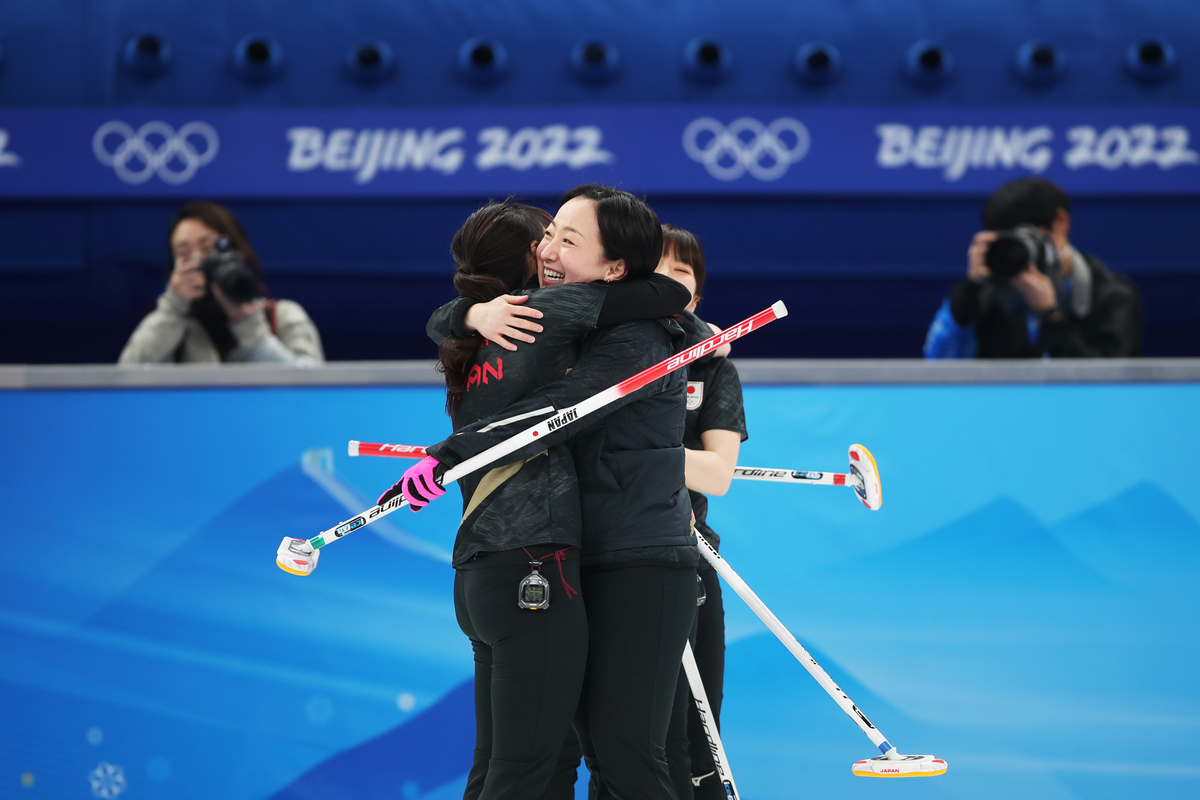 In a game seemly controlled by Denmark, Japan stunned the Danes with a double take-out for three points to win the game, 8-7.

Denmark’s Madeleine Dupont made a nose hit for two points in the fifth end to go up 4-3. Then, Japan was slightly heavy on their draw to the button for two and only got one to make the score 4-4 in the sixth.

Denmark continued their last-stone efficiency with two points in the seventh end, to take a 6-4 lead.

After another end cluttered with stones, Japan’s Fujisawa Satsuki played an in-off for a single point in the eighth end to go down, 5-6.

In a last end filled with stones from both sides and a missed take-out from Dupont, Japan was left with a shot for the win.

Denmark hung their shoulders and watched as Fujisawa cleared the Danish stones out to score three, and win 8-7.

“We haven’t played against Denmark so far, so that’s why we couldn’t expect how they will play in the Olympics. But today, especially the skip, she was really good. So that’s why we needed to be patient too, making our chance. So it was a tough run, but I’m so happy to win it in the last end.”

“Our goal was to take at least two [in the last end]. So that’s why the three was a bonus. Actually, I haven’t expected that we’re getting three.

The game opened with an offensive end by the Swedes, where it looked like they would have a big score.

A perfect draw behind cover by Canada’s Jennifer Jones, but surrounded by Swedish stones in the 12-foot, put the pressure on Sweden to make a shot for a possible five points.

Skip Anna Hasselborg attempted to play off one of her own stones to remove the lone Canadian counter, but just under-curled and resulted in a missed opportunity and a steal of one for Canada.

Sweden capitalised on their final stone in the third end, where they played a soft tap-back for two, and took a 2-1 lead.

After a force by Sweden, they had another chance to score multiple points in the fifth end after Jones flashed her final hit. Hasselborg played a split for three and went up 5-2.Jones then played a perfect freeze on a Swedish stone in the seventh end to ensure their opponents could only score one.

Hasselborg’s sweepers judged her final draw to the four-foot perfectly, and they secured one point for a 6-3 advantage.

But, momentum began to switch sides after a misjudged stone placement by the Swedes and Canada made a perfect take-out to score a greatly needed two points to go down 6-5 playing the ninth end.

In that ninth end, Canada put the pressure back on Sweden, forcing Hasselborg to make a key draw to the button for a single point and take a 7-5 lead heading into the tenth end.

The tenth end saw Canada draw around multiple corner guards, trying to set up a possible two or three points. On their last shot, Jones had a thin double take-out to win, but missed and only scored one point, for a 7-6 win to Sweden.

“We talked about it [the game], it was a really good mental battle for us out there, in a good way too,” said Sweden’s third Sara McManus. “We played great and it felt like we had the game in our hands.”

“It was unfortunate that both of Agnes’s rocks picked in the last end. It didn’t need to be so intense in the end. But it’s so nice to get away with a win today and we know that Team Jones always is a hard team to play against. But it’s always a fun game to play because you get to play a lot of different shots.”

In the final game of the session, Korea played ROC. Following a single steal in the fourth end for Korea, they stole again in the fifth when ROC came up light on a draw to the four-foot. It meant that Korea was leading by 6-2 at the break.

In the seventh end, Korea played a hit for two points to take a big gain on ROC, 8-3.

In the eighth end ROC’s sweepers dusted in an open draw to the eight-foot for two, to make the score 8-5. However, it wasn’t enough and Korea went on to win, 9-5.