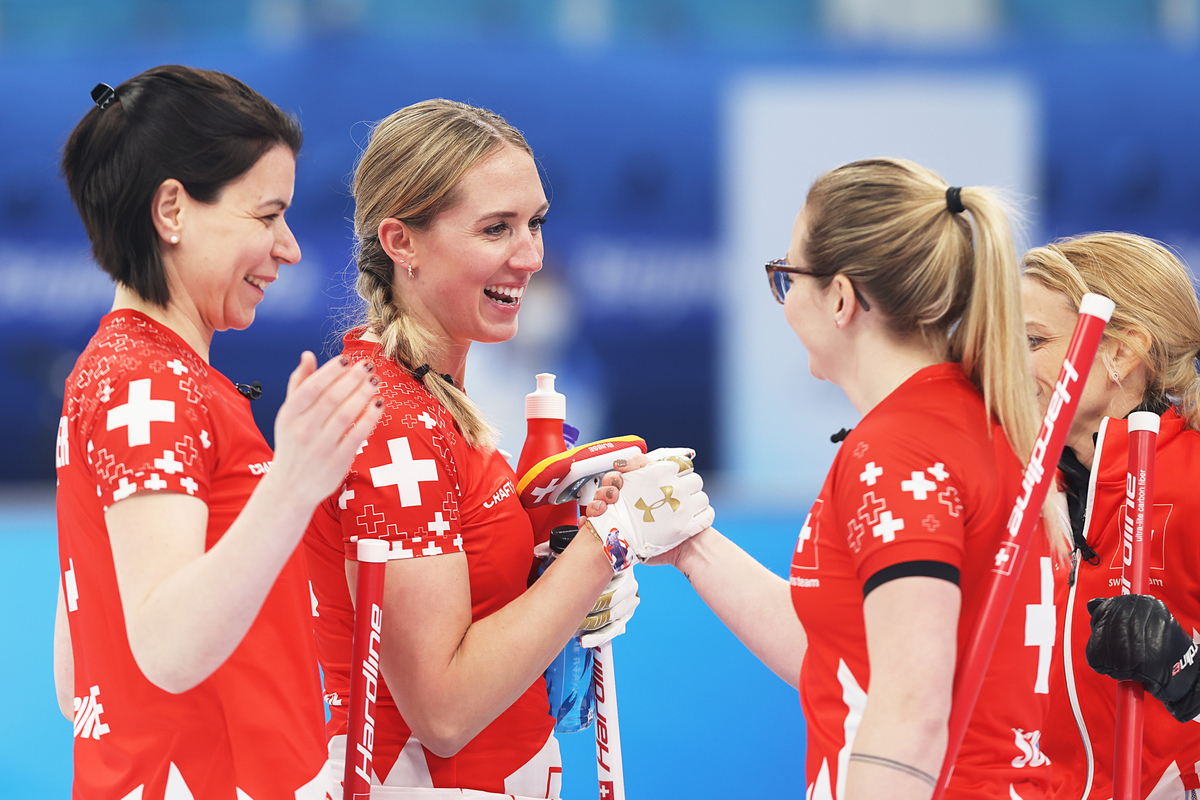 Switzerland beat Korea by 8-4 in Wednesday morning’s tenth round-robin session. Their victory means that they are the first women’s team to qualify for the Olympic Winter Games Beijing 2022 semi-finals.

Canada’s 7-6 win over United States gave them their fourth win so far and kept their semi-final hopes alive. In the third game of the session hosts China defeated Great Britain by 8-4.

Korea was leading by 2-1 after four ends of play against Switzerland. In the fifth end, the Swiss scored three points when their fourth player Alina Paetz played a hit-and-stay with her last stone. Switzerland lead by 4-2 at the break.

Korea then scored one point in the sixth and stole another in the seventh to level the game at 4-4 when Switzerland’s Paetz was heavy with her final draw.

After blanking the eighth end to keep last stone, Switzerland scored two in the ninth — following an umpire’s measure for second.

Switzerland then finished off their win when Korea’s Kim EunJung’s attempted take-out failed in the tenth, giving Switzerland a steal of two points for the 8-4 end result. This victory booked Switzerland their place in the semi-finals.

After this win, Esther Neuenschwander, Switzerland’s second player, spoke, “Korea are a really good team, and they are tough to beat. I’m always exhausted after the games, but also, I’m happy about that win and I’m happy that we qualified today. I think scoring in the ninth end to go two up was the key.”

Canada took the early lead in their game against United States, scoring two in the second end and then stealing two more points in the third end for a 4-1 advantage.

United States clawed their way back into the game with a single point in the fourth and a single steal in the fifth to reduce Canada’s lead to 4-3.

Canada edged ahead again with one point in the sixth.

Then, in the seventh, United States skip Tabitha Peterson faced three Canada counters when she came to play her last shot. She managed to expel two of them, but left the third in place, giving Canada a steal of one and a 6-3 lead.

In the eighth end, Peterson scored two points with a tap-back.

Then, when Canada skip Jennifer Jones missed a raise take-out attempt in the ninth, the Americans stole one and the game was level at 6-6.

Eventually, Jones was able to play a draw into the house to score one point in the tenth and finish off her team’s vital 7-6 win.

Speaking later, Canada’s second player Jocelyn Peterman said, “That was a really important game for us. We just wanted to come out and play our best, and we’re happy with our performance. We felt comfortable and in control for the whole game, so it was nice to be able to pull it out in the end.”

The teams were level at 2-2 at the half-time break. Great Britain took a single point from the sixth end to take a 3-2 lead.

In the seventh, China’s skip Han Yu played a draw to score two points and move into a 4-3 lead.

Great Britain’s Eve Muirhead then played a hit to score one point in the eighth and level the game at 4-4.

However, in the ninth Han played a hit and then just kept her shooter within the rings to score three points and take a decisive 7-4 lead.

Muirhead just missed a cross-house double take-out attempt in the tenth, giving China a steal of one and their third win so far, by 8-4.

These results qualified leaders Switzerland for the semi-finals.

Sweden, who sat out this session, is sitting in a clear second place on the table behind Switzerland.

Meanwhile, four teams have four wins just behind these two.

Canada and Japan share third place on four wins and three losses, while Great Britain and United States both have a won four, lost four record.

Korea, on three wins but with two games still to play, are not yet out of play-off contention.