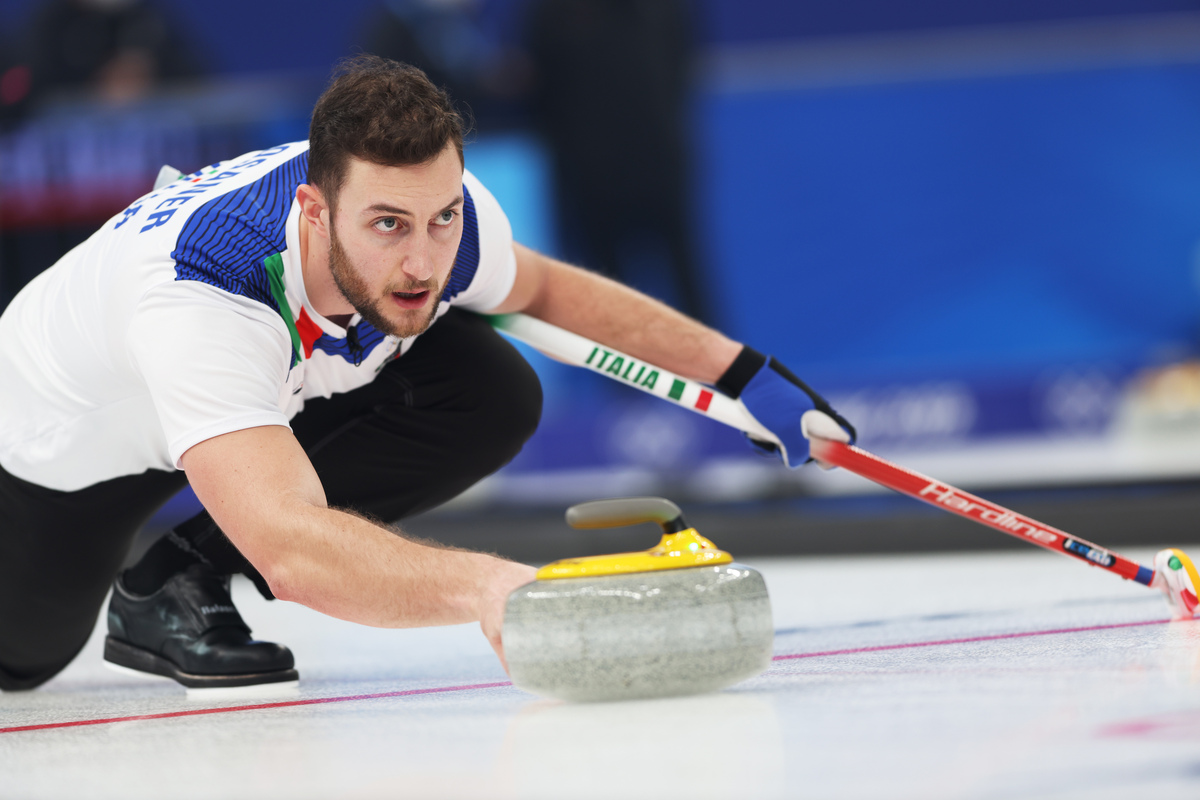 Italy became the first team to secure a spot in the semi-finals after they beat Great Britain by 7-5 in Saturday evening’s ninth Mixed Doubles round robin session to record their sixth win without defeat.

In the other games, Canada beat United States by 7-2 to get their campaign moving in the right direction again, Norway beat China by 9-6 to move into joint fifth place with United States and Switzerland were 11-3 victors over Czech Republic.

In their game against Great Britain, Italy opened with one point when Stefania Constantini promoted one of her own stones. Great Britain then scored one point in the second end and stole another in the third to take a 2-1 lead, but this was the only time they led in the game.

The Italians scored two in the fourth and then stole a single in the fifth for 4-2 lead. Great Britain levelled the score in the sixth end when Jennifer Dodds played a hit for two points, but the telling blow came in the seventh, when Italy scored three.

When Britain could only respond with a single point in the eighth, Italy sealed their 7-5 win that keeps them at the top of the table on six wins and no losses, ahead of second-placed Sweden (5-2) who sat out the session.

After the game Italy’s Amos Mosaner, said, “I didn’t perform so well but Stefania saved me in a lot of situations – that was the key to the game. I didn’t expect six games without losing. It’s cool because six and zero is fine, but we have three games to go and we have to keep focus and see what happens.”

Canada faced United States aiming to return to winning ways after their earlier loss to Sweden.

The teams swapped singles with last stone advantage in the first four ends but, in the second half, Canada opened with a single steal in the fifth end and repeated that in the sixth for a 4-2 lead when United States’ Vicky Persinger caught a front stone. Canada then forced a further steal of three points in the seventh end to take a 7-2 lead, and United States conceded.

Afterwards, Canada’s John Morris said, “You’ve got to really make sure you have a good second half in Mixed Doubles. We were close but not quite there in the first half. My partner was struggling a little bit, but she’s got the heart of a lion and I knew she was going to turn it around. You’ve got to keep the faith. She then made some wonderful shots in the second half and really put the pressure on the Americans.”

Norway played China in this session and, after China opened with a single point in the first end, Norway scored two points in the second. The Norwegians then had single steals in the third and fourth ends to go into the break with a 4-1 lead.

They virtually sealed their win in the sixth win when Kristin Skaslien made a simple tap-up for five points and a 9-3 lead. They survived a scare in the seventh when China scored three points to win by 9-6.

The game between Switzerland and Czech Republic was virtually one-way traffic. The Swiss opened with a score of three in the first end and then steals in the next four ends gave them a 10-0 lead as they played the sixth end. The Czechs managed to score three in this end before conceding after the seventh end, with Switzerland emerging as 11-3 winners.

This is only Switzerland’s second win in what they feel has been a disappointing campaign.

Afterwards, Martin Rios said, “We lost two games in the extra end and now we are where we are.  We have to look forward now and try our best in the coming games and try to win all of them to have a chance – that’s all we can do now.”