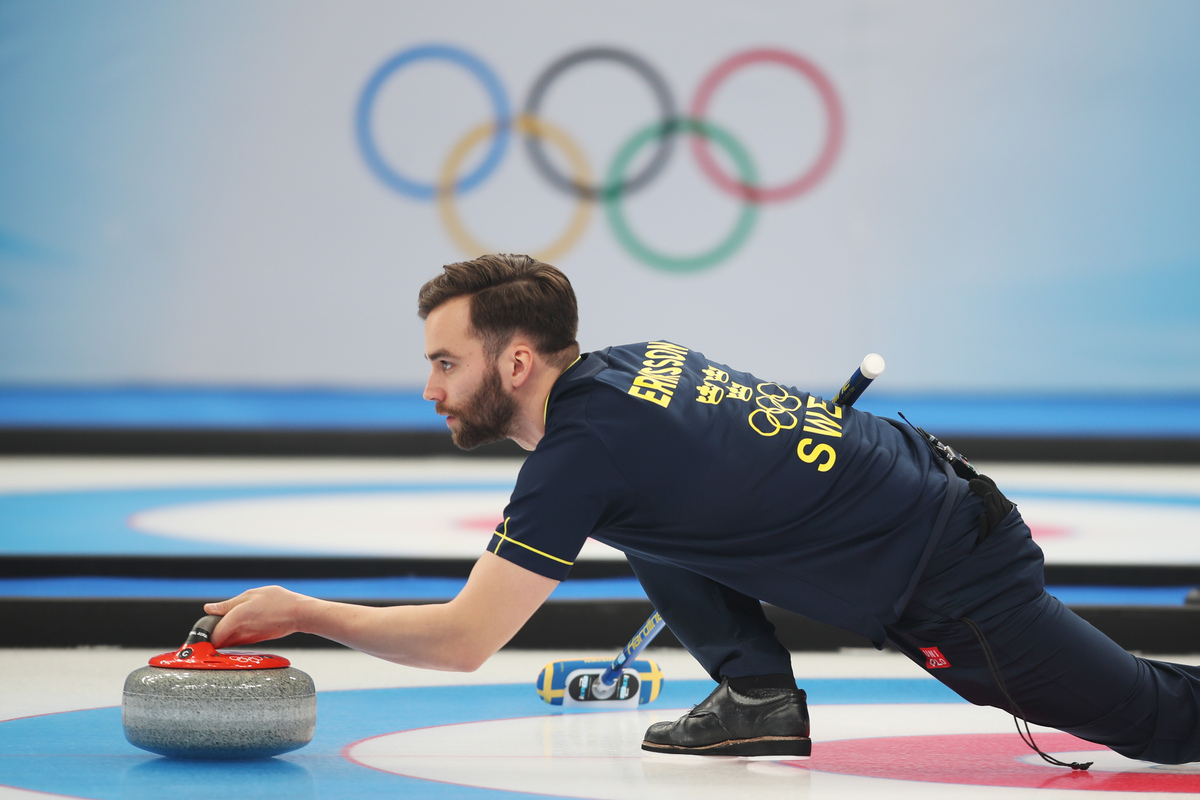 Sweden beat Canada by 6-2 in Saturday afternoon’s eighth Mixed Doubles round robin session to chalk up their second win of the day, after beating Switzerland, 6-1, in the morning. This kept them in clear second place on the rankings and keeps the pressure on leaders Italy, who had a 7-3 win over Australia in this session.

The other session winners were United States, who beat China by 7-5, and Great Britain, 8-3 winners over Czech Republic.

In the game against Canada, Sweden opened with two single steals. In the third, Canada’s Rachel Homan attempted an angle raise which did not quite work, and she had to settle for just one point to reduce Sweden’s end to 2-1. Good Swedish play in the fourth end left Almida de Val with a simple draw to score three points and take a 5-1 lead into the break. The teams swapped singles in the fifth and sixth ends, and then Canada conceded, with a final score of 6-2.

After this second win of the day, Sweden’s Oskar Eriksson said, “I’m happy with our performances today, making a lot of shots and making it tough for our opponents. That’s the key to mixed doubles – it’s tough to make every shot, so… just put the pressure on.”

With Sweden breathing down their necks, it was more important than ever that round robin leaders Italy maintained their unbeaten record as they faced Australia in this session.

However, their game did not start well, as they gave up a steal of one in the opening end. They then bounced back with two points in the second and had a steal of one in the third when Australia’s Tahli Gill caught a front guard with her last stone. The Italians led by 4-3 as they played the seventh end, and their female player Stefania Constantini had the task of drawing for three to extend her team’s lead to 7-3. Australia then conceded the game.

Speaking later, Constantini said, “You can’t play 100 per cent all the time, so the important thing is to be able to deal with what is happening and managing the scoreboard. I think the seventh end was very important where we managed to keep a big gap of four points to relax for the last end.”

This was a fifth win from five games for Italy and it keeps them at the top of the table. Sweden, in a clear second place, are the only other team to have five wins, but they have also recorded two losses, having played two games more than the Italians.

Behind these two, Great Britain sit in third place, thanks to their 8-3 win over Czech Republic in this session. The British duo dominated the first half of the game, scoring two in the second end and stealing three in the third when a take-out attempt by Czech’s Zuzana Paulova just tickled its target stone and rolled out of the house, giving Britain a 5-1 lead.

Britain were 6-3 up as they played the seventh end and secured their win with a score of two more points to complete an 8-3 win that gives them a four wins and one loss record.

Britain’s male player Bruce Mouat spoke later, saying, “We figured out draw weight a lot earlier than we normally have. That was probably the biggest thing for us. Also we played a really good game throughout this time.”

In the fourth game of the session, United States faced China and the teams were tied at 3-3 as they went into the fourth end break. The Americans scored three points in the fifth end to take a 6-3 lead, but China responded well in the sixth end, when their female player Fan SuYuan played a nose-hit to reduce the American lead to 6-5. United States’ female player Vicky Persinger then scored one point with a hit in the seventh end to give her team their third win so far, at 7-5.

Following this win, American male player Chris Plys spoke about his Chinese opponents, “They were right there. They got us in trouble a few times, and managed to make a couple of good ones to get out of trouble. They are a good curling team – we just made a couple of big shots.”