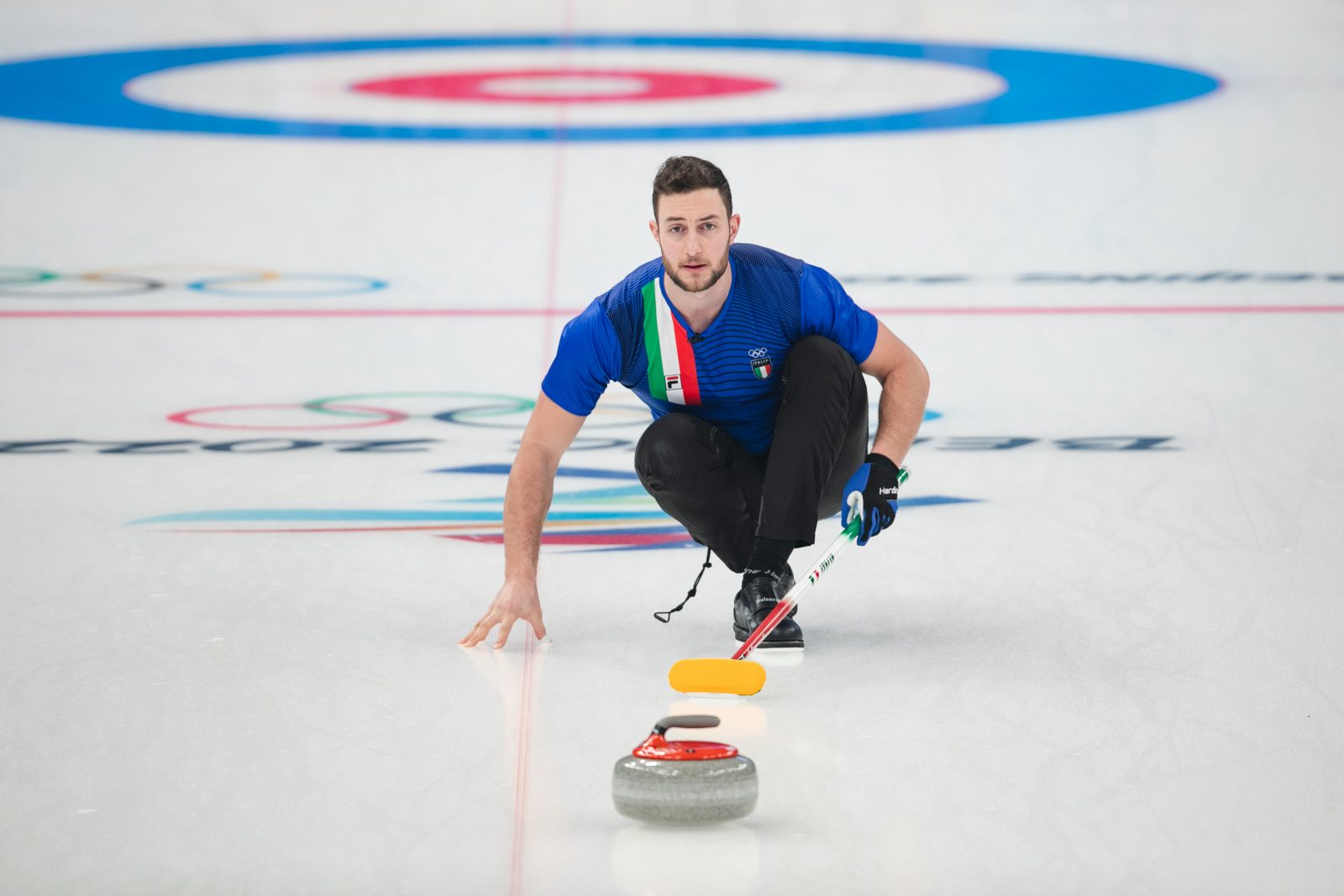 Italy recovered from giving up a score of five in the second end against Norway to win by 11-8 in Friday morning’s fifth session of Mixed Doubles round-robin play. This result keeps them at the top of the rankings and maintains their unbeaten record, with three wins.

The other winners in this session were Canada, who beat Switzerland by 7-5, and Sweden who had a 7-6 win over Australia.

Italy opened strongly against Norway, scoring three in the first end, but in the second, a good build-up by Norway allowed Kristin Skaslien to play a straightforward draw, to score five and take a 5-3 lead.

Undaunted, the Italians set about recovering, scoring two in the third end to level at 5-5. Then, a hit and stay by Stefania Constantini for two points in the fifth end restored their lead at 7-6. In the sixth end, Skaslien was too long with her last stone, to give Italy a steal of two and a 9-6 lead.

Norway reduced that lead to 9-8 in the seventh end but a hit by Constantini in the eighth produced another two points for Italy as they completed their turn around, winning by 11-8. This result puts them in clear top spot on the rankings.

Speaking about giving up the score of five, Italy’s Amos Mosaner said, “In Mixed Doubles, anything can happen – we were ahead by three points and then we gave up five. It wasn’t ok, but not so bad because we were just two down. We tried to stay calm because it was only the second end.”

Canada opened offensively in their game against Switzerland, scoring three in the first end. By the time they reached the sixth end, Canada led by 6-2, but, in the sixth, the Swiss scored two points to reduce that lead to 6-4.

Canada were able to settle things again after this, scoring one in the seventh and keeping Switzerland to just a single score in the eighth to emerge as 7-5 winners. This result puts them into joint third spot alongside China, Czech Republic and Great Britain, who all sat out this session, along with United States.

After the game, Canada’s John Morris was asked about his tactics and he answered diplomatically, saying, “Every team is different – they play to their strengths and other teams’ weaknesses. I play a little bit different Mixed Doubles than most teams, so I don’t want to give you all my strategy because then the other teams will know it and we won’t have that advantage anymore.”

Australia were still looking for their first win when they came on to play Sweden in this session.

Sweden led by 2-1 as the teams played the fourth end, but, in that end, all that Australia’s Tahli Gill could do with her last stone was to cut Sweden down to a single-point steal for a 3-1 Swedish lead. Gill produced more damage limitation in the fifth end but once again Sweden emerged with a single point steal to increase their lead to 4-1. However, in the sixth, Gill was able to play a tap-out with her last stone, giving the Australians three points from the end and levelling the game score at 4-4.

The Australian recovery was short-lived though, as Sweden came right back with a three of their own in the seventh end for a 7-4 lead. The Australians battled on, but Gill could only hit for two points in the eighth as Sweden completed a 7-6 win that put them into second place on three wins and one loss, having played one more game than leaders Italy.