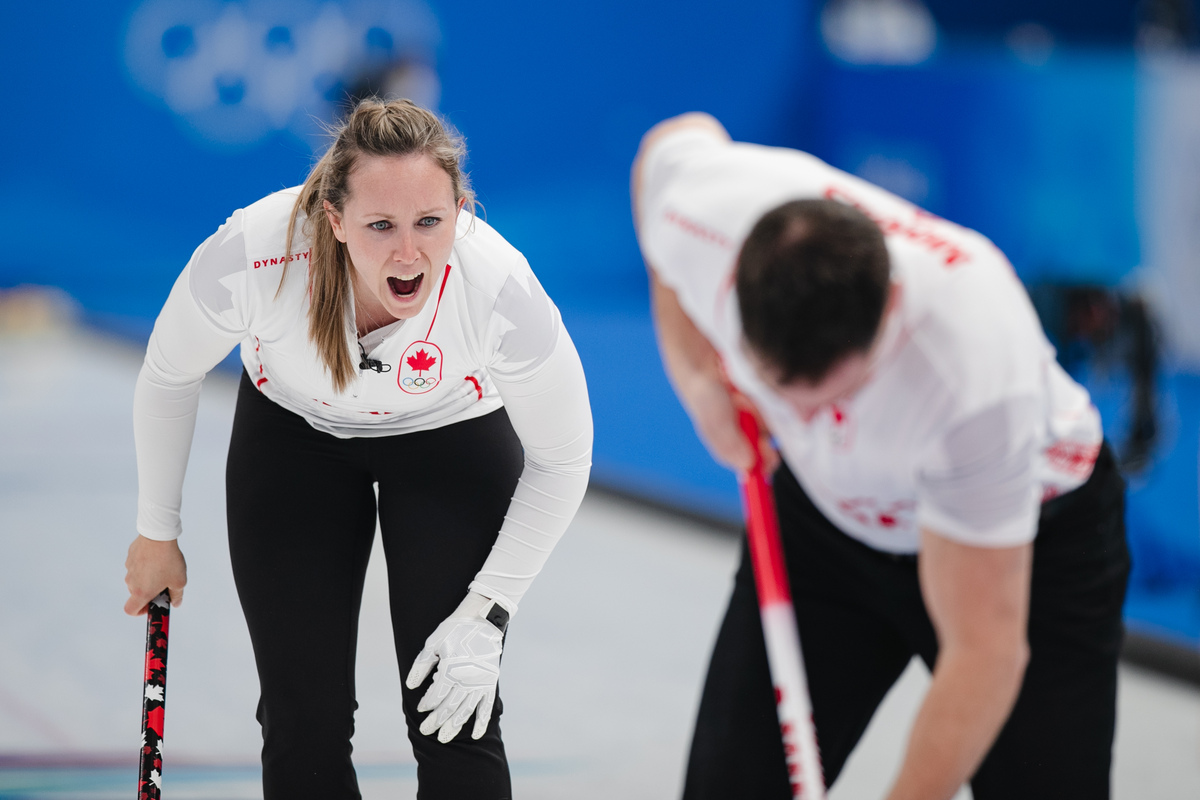 Defending Olympic gold and silver medallists Canada and Switzerland both won in Thursday evening’s fourth Mixed Doubles session, and these results contributed to a four-way tie in second place on the rankings behind unbeaten Italy, who did not play in this session.

Canada faced Norway in their second game and in the first end Norway’s Kristin Skaslien played a gentle tap-up to open the scoring with two points. Canada then made the first breakthrough of the game in the second when they built their stones in the house to leave Rachel Homan with a simple last stone to score four and take a 4-2 lead.

Norway scored two in the fifth end with a tap by Skaslien to level the score at 5-5. In the eighth end, with the score now tied at 6-6, Skaslien was short with her final draw to give Canada a further single point without having to play their last stone, and win by 7-6.

Canada’s John Morris said, “Obviously, 0 and 2 after the first day is not the best feeling, so it’s better to have a win under our belt.” Adding “Mixed Doubles is a roller coaster, you’re never out of it, you’re never safe. So, we just have to be resilient.”

Switzerland were looking for their first win when they faced unbeaten Great Britain in this session, and it was the Britains who opened the scoring in the first end when Jennifer Dodds played a soft draw onto the button for one point. However, in the second end Dodds wrecked on a front stone with her last effort, leaving the way clear for Switzerland’s Jenny Perret to score three for an early 3-1 lead. The Swiss followed that up with another score of three in the fourth end to take a 6-3 lead into the break.

Britain reduced that lead to 6-5 in the fifth with a draw by Dodds for one point, and another successful Dodds draw in the seventh gave Britain a score of three to tie the game, 7-7. Despite Bruce Mouat’s best sweeping efforts in the eighth, he could not drag Dodds’ final stone far enough, giving Switzerland a game-winning score of one point for an 8-7 win, without Perret having to play her last stone.

After his team’s win Switzerland’s Martin Rios said, “In our first game today against Italy we made a lot of mistakes, we left a lot of points there. Our plan for tomorrow is to win our next game. We will go game by game, end by end and we’ll see what it results in – whether it’s enough for the semi-final. Our goal is simply to play good curling.”

The game between China and Sweden was tight all the way, with the lead changing hands five times.

In the third end, with China leading by 2-1, an umpire’s measure gave a score of two points for Sweden, for them to take a 3-2 lead.

The teams were tied at 3-3 as they played the fifth end. With her last stone, Sweden’s Almida de Val clipped a front stone, giving China a steal of one and a 4-3 lead.

Then, in the sixth end, de Val was facing five Chinese counters as she played her last and managed to get inside them all to score one point and level the game at 4-4.

China’s Fan SuYuan played a gentle tap with her last stone in the seventh end, and eventually another umpire’s measure confirmed that China had scored two points to take a 6-4 lead.

In the eighth end, de Val tapped out a China stone to score three points and seal a 7-6 win for Sweden.

After her team’s win, de Val reviewed their successful eighth end, saying, “We played a very good last end, got the angles good and placed a lot of good freezes and got the opportunity for the three in the end. We’re glad we came out winning.”

Her partner Oskar Eriksson said, “The Chinese team was playing great, we didn’t get easy mistakes from them when we had the pressure on them. It looks like all the teams are in top form, so we are expecting every game to be as tough as this one.”

Australia were still looking for their first win when they faced Czech Republic in this session.

This game turned on a miss by Australia’s Tahli Gill in the second end when her attempted tap and lie was heavy and went through the house, to yield a steal of three for the Czechs. With this steal, Czech Republic moved onto a 4-0 lead.

A further Czech steal of one point in the third gave them a 5-0 lead. Try as they did, the Australians could not recover from this and conceded defeat, with Czech leading by 8-2 after the seventh end.

After her team’s win, Czech Republic’s Zuzana Paulova said, “Actually we didn’t feel bad after our earlier loss, I think we played really well. So, we came out with confidence to this one. I think we brought our best to this game.”

With Italy at the top of the table, undefeated with two wins, four teams — China, Czech Republic, Great Britain and Sweden — all share second place on two wins and one loss, with only Australia now looking for their first win.