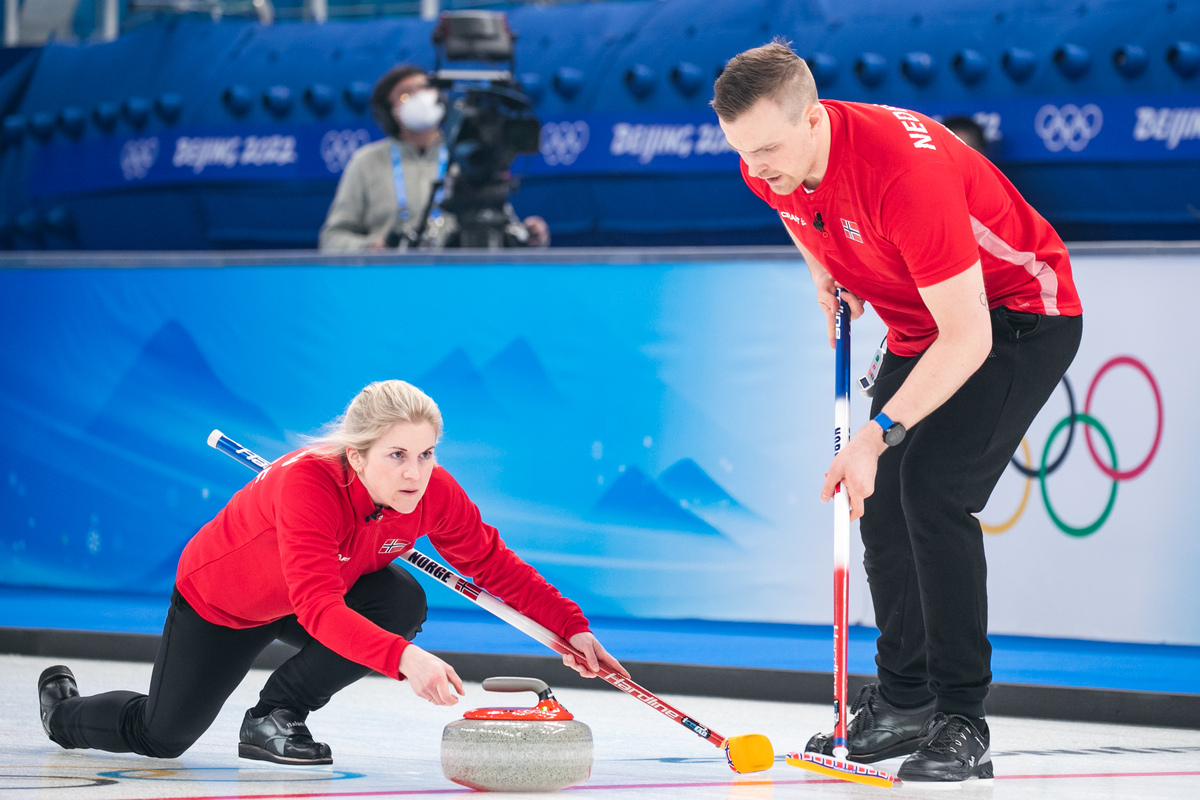 Norway beat Great Britain by 6-2 in Sunday evening’s twelfth session of Mixed Doubles round-robin play. This result, as well as others, means that both have qualified for the semi-finals — due to their head-to-head results against Sweden and Canada — along with already-qualified leaders Italy.

The Italians beat Sweden by 12-8 in this session to record their eighth win and maintain their perfect record.

The fourth semi-final place will be taken by either Canada or Sweden, who both lost in this session. This will be finally determined by the results of Monday morning’s 13th and last round-robin session.  Sweden have finished their round-robin programme, while Canada will face table-toppers Italy.

Norway started strongly in their game against Great Britain, scoring one in the first end and then stealing another single point in the second for a 2-0 lead.

In the third end, Great Britain’s Jennifer Dodds played an angle raise to put her team onto the scoreboard with one point.

Norway took a 3-1 lead into the fourth-end break when Kristin Skaslien scored one more point with a draw into the house.

Norway then built their lead to 4-1 in the fifth end, when Britain gave up another single steal. The British team then opted for their power play in the sixth but could only score one point when Dodds came up short with her final draw.

The Norwegians thought they had scored three in the seventh end, but an umpire’s measure determined it was only two points, and they went into the eighth end with a 6-2 lead.

Britain ran out of stones in the eighth to give Norway their fourth successive victory.

Afterwards, Norway’s Skaslien said, “We knew this would be a tough game — they’re great players, so we had to play our best today to win and we obviously had a great game. We played well, we did a lot of great shots, we felt we had control basically the whole match, except for one end I think. We felt really confident and we were precise on our shots, so it felt good.”

Sweden faced Italy in what was their final round-robin game. The Swedish knew that victory would qualify them for the semi-finals.

They opened with a score of two in the first end, but a single point by Italy in the second end, followed by one-point steals in both the third and fourth ends gave Italy a 3-2 lead at the break.

Sweden then re-established their lead with a score of three in the fifth end, for 5-3, but Italy responded with a score of five in the sixth end when Stefania Constantini played a heavy hit.

With the score tied at 8-8 as the teams played the eighth end, Constantini played another strong hit, this time scoring four points to seal a 12-8 victory.

After this win, Constantini said, “We really want to play our best and that is what we are doing, but I think every team is strong, so we are just doing our best and then what happens, happens.”

Australia faced a Canadian team that included John Morris, who has acted as their coach during their Olympic qualification campaign.

It had taken all of eight round-robin games before Australia recorded their first win of the event earlier on Sunday but, remarkably, they found themselves up by 7-0 at the half-way break in this game.

After this, Canada fought back. In the fifth end, Canada’s Rachel Homan successfully delivered a draw for four to reduce Australia’s lead to 7-4.

Then, in the seventh, Homan had another draw, scoring three points this time to further reduce Australia’s lead to 8-7.

Australia’s Tahli Gill had a chance to win in the eighth, but her hit rolled too far to give Canada a steal of one and tie the game at 8-8, forcing an extra end.

In that extra end, Homan was heavy and wide with her last stone, giving Australia a score of two points and a second win — by 10-8 — without them having to play their last stone.

After what was the Australians’ last game in their first Olympic experience, Tahli Gill reflected, saying, “I’m just so incredibly grateful that Dean and I were able to finish our campaign, and to finish on two wins is a really special feeling. This week sometimes it didn’t go our way, but our fight-back and our resilience has just shown what we can do. We’re so excited for the future. I’m excited to go home, but I’m excited to go home and work really hard for the next four years.”

Switzerland faced United States in the fourth game of this session, knowing that their semi-final chance had gone.

However, they opened with a score of three in the first end. It took all the way to the seventh end for United Sates to get back on terms, when the Americans scored two points to level the score at 5-5, but the Swiss finished with a score of one in the eighth for a 6-5 win, and their third victory so far.