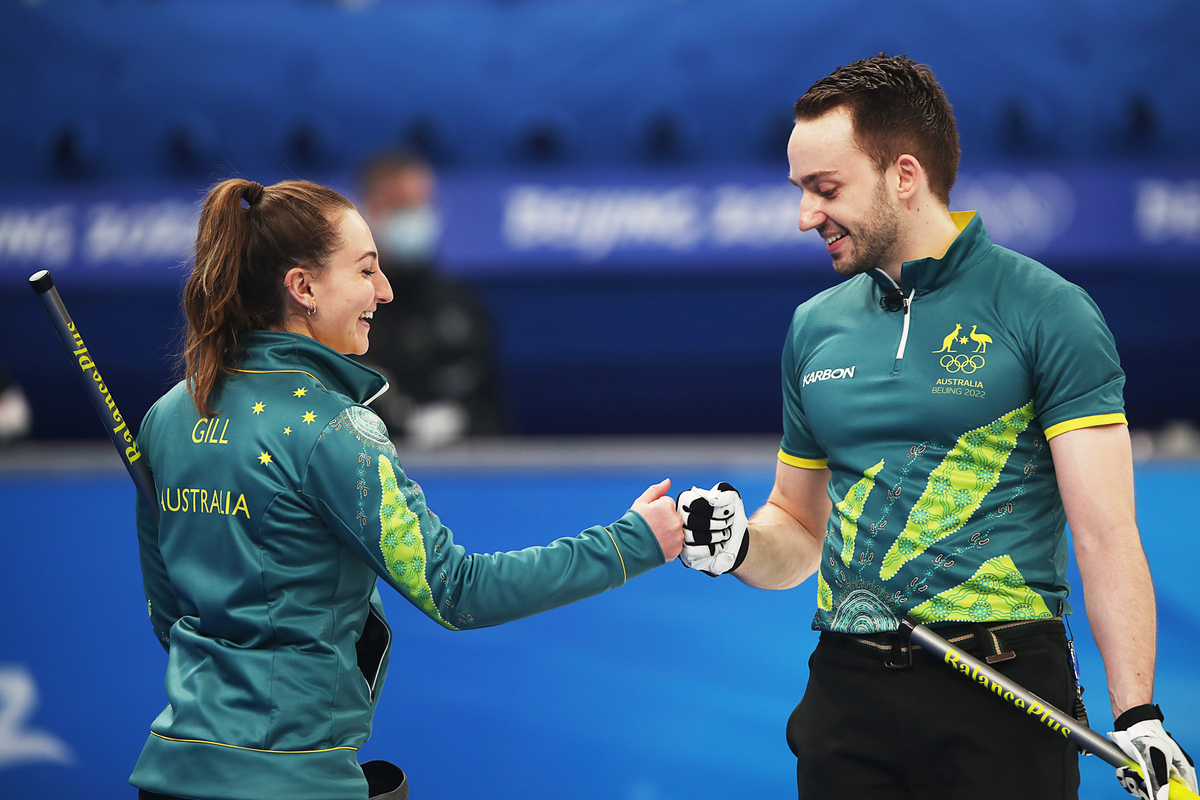 Australia recorded their first win so far when they beat Switzerland by 9-6 in Sunday afternoon’s eleventh Mixed Doubles round-robin session, a result which also ends semi-final hopes for the Swiss.

In the other games of this session, Canada beat Czech Republic by 7-5 after an extra end, while Norway were 6-2 winners over Sweden, leaving these two teams still fighting for semi-final qualification.

Australia opened strongly against Switzerland, scoring two in the first end, and then stealing one more point in the second for a 3-0 lead.

After this, the Swiss fought back, opening their account with a single point in the third.

Then, Switzerland stole three points in the fourth when an attempted promote by Australia’s Tahli Gill just missed its target stone.

In the fifth end, Gill attempted a clear-out of a busy house but still left two Swiss stones counting, to give up a steal of two and hand Switzerland a lead of 6-3.

The Australians opted for their power play in the sixth end and got their reward when Gill played a cross-house double take-out to score three points and level the game at 6-6.

In the seventh end, Switzerland’s Jenny Perret hit with her last stone but rolled too far, giving Australia a steal of two and an 8-6 lead.

A single steal in the eighth end was enough to give Australia their historic first-ever Olympic win, by 9-6.

Afterwards Gill said, “Our emotions going into that were that we were just so grateful to be out there to do what we love. I think we just put our heart and soul into that game, and to come back with a win and finish our campaign on a really positive note just feels so awesome.”

Norway and Sweden faced each other in this session with the Swedes knowing that a win would seal their semi-final qualification.

Thanks mainly to an opening score of two in the first end, Norway went into the fourth-end break holding a 3-2 lead.

She played a hit and stayed inside all of them to add another point to her team’s score.

After this, single steals by Norway in each of the sixth and seventh ends gave them a 6-2 victory for their fourth win overall, keeping their semi-final hopes alive. They have two more round-robin games to play – against Great Britain and then Switzerland.

After this vital win, Skaslien confirmed, “It was basically win, or no chance for play-offs. We need two more wins as well now, so we have to keep fighting. We had a really good game there, so it feels good.”

Her partner Magnus Nedregotten added, “We had some good draw shots today and really consistent draw weight. Kristin was skipping on her top level, and I was playing good shots. It was just a total performance.”

The game between Canada and Czech Republic saw the scoring go with last-stone advantage in the first half, with the teams tied at 2-2 at the break.

After this, Canada made the first breakthrough with a single steal in the fifth end when Czech Republic’s Zuzana Paulova played a hit but could not keep her own stone in position to score.

In the sixth end, the Czechs selected their power play and although Canada’s Rachel Homan played a strong take-out, she still left two Czech stones counting, giving her opponents a steal of two and a 4-3 lead.

The Czechs led by 5-3 as the teams played the eighth end, when Homan played a draw onto the button to give Canada the two points that tied the game at 5-5.

In the extra end, Paulova could not dislodge two Canada stones and this steal of two gave the Canadians a 7-5 win and promoted them into second place on the rankings alongside Great Britain. Sweden is currently in the fourth and last semi-final qualification slot.

Already-qualified Italy faced China in this session and were able to maintain their unbeaten record.

The Italian victory was mainly thanks to opening the game with a score of three in the first end, and carving out three single-point steals in the game, for 8-4 – their seventh win.