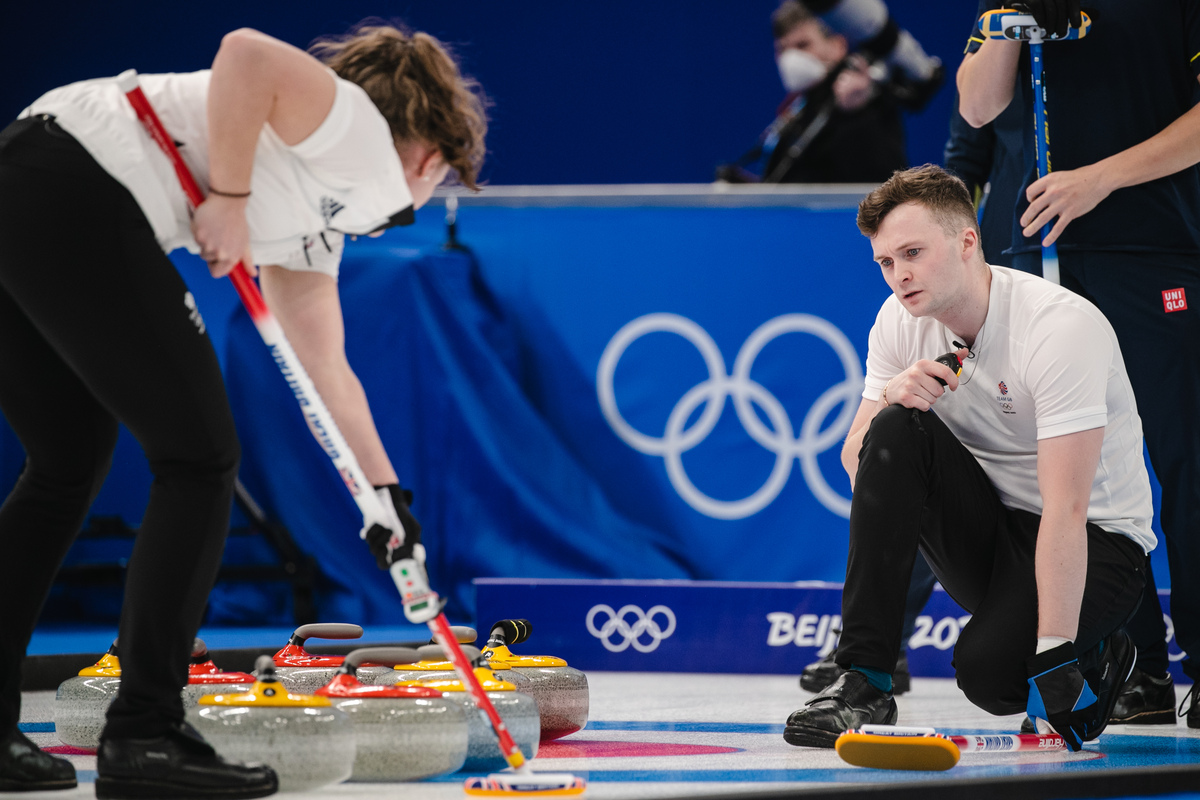 Like the Czechs, Australia are also making history as their nation’s first-ever Olympic curlers, and they were denied their own historic win by United States, who carved out a last-end single steal to win by 6-5.

This Wednesday evening’s round-robin session was the first action of the entire Olympic Winter Games Beijing 2022, and in the fourth game, hosts China beat Switzerland by 7-6 after an extra end.

Britain’s world champions Jennifer Dodds and Bruce Mouat were 1-2 down after the first two ends, but moved into a clear 4-2 lead with a score of three in the third end, when Dodds played a delicate tap-up.

It took an umpire’s measure to finally determine the score of three points in the end.

A steal of two by the Swedes in the fifth end, when Dodds’ final tap-up went wrong, gave Sweden a lead of 5-4. However, a steal of three by the Britons in the seventh gave them an 8-5 lead.

They then completed their 9-5 win with a further single steal in the eighth end.

After this win, Mouat said, “It felt really good to be out on the ice and curling after five or six days here. We’re having a lot of fun and just soaking up the Olympic atmosphere. It’s buzzing to be on the ice and to get a win. It’ll give us a lot of momentum going forward.”

His partner Dodds added, “For us, it was great to be in an Olympic arena. There was a lot of excitement and some nerves too, but once we got going, the nerves disappeared.”

The game between Norway and Czech Republic was a battle of married couples. The teams were tied at 2-2 after three ends and then at 3-3 after five.

Norway scored two in the sixth and then had a single-point steal in the seventh to lead by 6-3 before the eighth end.

The Czechs managed to score three in the eighth to level the game again – this time at 6-6 – and force an extra end. Norway had last-stone advantage in the extra end but got an angled tap-up wrong to give up a steal of one.

It meant that the Czechs finished the game on 7-6 to record their nation’s first-ever Olympic curling victory.

Despite the fact that Australia were also making their Olympic debut, they took hold of a tight game in the sixth end. Down by 2-3, they used their power play to score three points and take a 5-3 lead when their female player Tahli Gill had a straightforward draw for three.

The Americans bounced back after this and levelled the game at 5-5 when a well-judged double take-out by Vicky Persinger scored two points.

In the eighth, Australia’s Gill had a take-out attempt to score the one point that would give them a historic win, but she missed the shot, giving United States a single-point steal and a 6-5 win.

Afterwards, Persinger said, “I was really pleased to make the double in seven because it gave us that chance in the eighth and though my last one was good in that end, we know we got away with one.”

Persinger’s partner Chris Plys spoke about giving up the three points in the sixth end, saying, “I took too much ice and tried to get too cute on my second shot. That’s something I’ll learn from in the rest of the week – it wasn’t ideal. The misses and mistakes we made we’ll learn from moving forward.”

He also acknowledged that his pairing enjoyed good fortune in the eighth end, with the Australian miss, saying, “Sometimes a little luck goes a long way in a tournament like this.”

Hosts China took an early 3-0 lead after three ends in their game against Switzerland, helped by single-point steals in both the second and third ends. However, Switzerland fought back, scoring two in the fourth end to reduce China’s lead to 3-2.

Then, the Swiss took the lead at 5-4 in the sixth end when Jenny Perret drew her final stone into position to score three points.

China then scored two in the seventh end to re-take the lead at 6-5 and Switzerland scored one point in the eighth end to tie the game at 6-6 and force an extra end. In that extra end China scored one point to win by 7-6 and please the small but enthusiastic home crowd that was watching.

After this win, China’s female player Fan SuYuan said, “Whether we win or lose, we support each other. Every game here is not easy for us, and we want to prepare the best we can.”

Speaking about her last stone she said, “I didn’t think too much about it, because I always throw the last shot of the game.”

Defending Olympic champions Canada and Italy sat out this session and they both start their campaigns in Thursday’s second round-robin session.