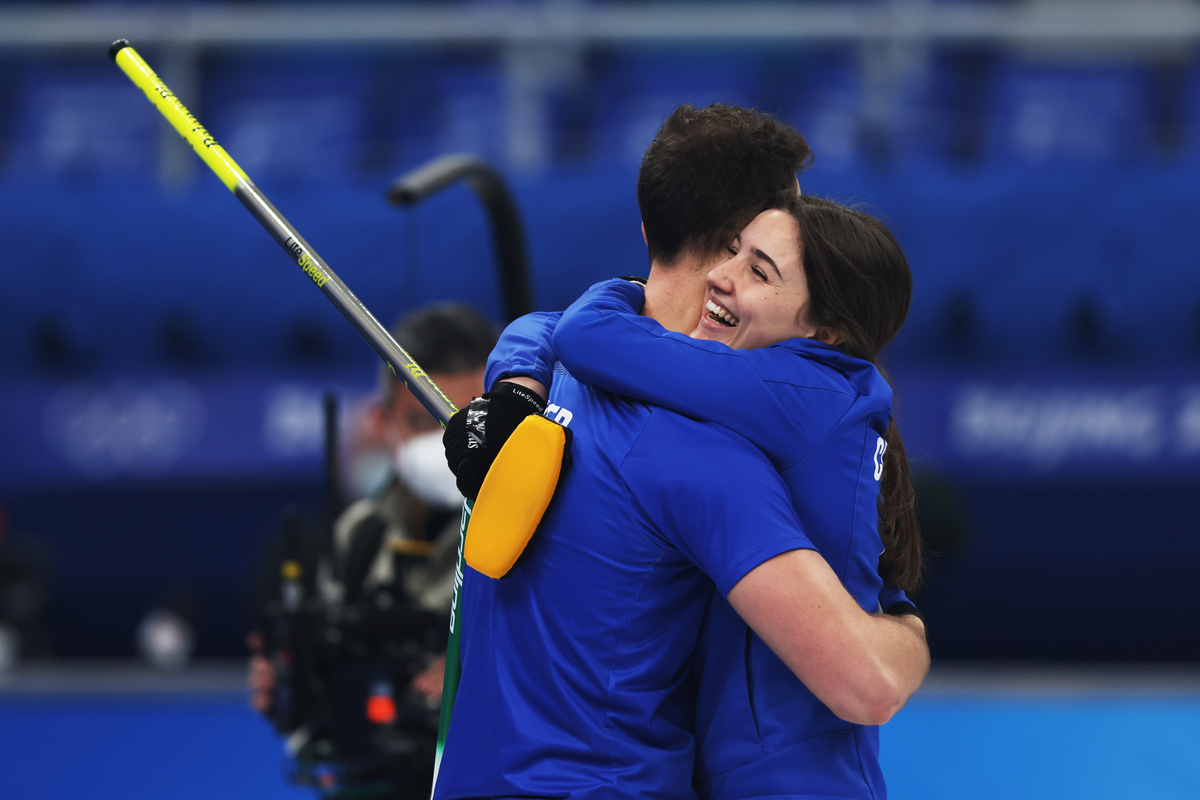 This performance crowned a perfect week for the Italian duo, who, with this victory, completed their 11-game programme undefeated.

However, it was Norway who took the early lead, stealing two points in the first end when Constantini was wide with her nudge attempt.

In the second end, Italy scored two points to level the game. In the third end, good Italian build-up play meant that Norway’s female player Kristin Skaslien was facing four Italian counters when she came to play her last stone.

Skaslien raised one of her own stones and managed to get inside three of the Italian stones, but leaving one in scoring position.

This gave Italy a steal of one and the lead in the game for the first time, at 3-2.

The fourth end was the real turning point in the game.

Skaslien was facing three Italian counters when she came to play and, once again she attempted a raise of her own stone.

But it slipped past the cluster of all three Italian stones, giving Italy a steal of three and a 6-2 lead at the fourth-end break.

The Norwegians battled back in the second half, and, in the fifth end, with Italy lying four, Skaslien kept her nerve to draw inside all of them and score one point to reduce Italy’s lead to 6-3.

Italy could only score one point instead of the two they were looking for in the sixth end, when Constantini’s final draw was longer than she wanted, moving Italy’s lead to 7-3.

Norway kept on battling and in the seventh end they scored two points to reduce Italy’s lead again, to 7-5.

However, in the eighth end, Constantini was left with a clear take-out to win the game, and she delivered this nervelessly, taking out both counting Norway stones and leaving her own in place to score one more point. This sealed her team’s historic 8-5 win.

After the game, Stefania Constantini said, “It’s the dream of every athlete, it’s really amazing, it was my dream, our dream, and it’s so good because we worked hard to reach this goal — and now the goal medal is ours!”

More generally she added, “I think maybe people [in Italy] will be interested in this new sport and try it and start to play. That would be really amazing.”

Her partner Amos Mosaner also spoke, saying, “Winning a gold medal without losing a game is amazing. I don’t believe it now — maybe I will believe it in the coming days. I’m not realising what is happening now — it’s a gold medal, but I didn’t expect it.”

Norway’s Kristin Skaslien also reflected on the game, saying, “We have a silver medal in the Olympics and that’s pretty awesome. So, overall we are super happy. We had a very bad start to the week, and we managed to turn it around. We’re a bit disappointed losing the gold medal game and wish we could have played a little bit better, to give the Italians more of a fight. But they were so good today, they played amazing.”